The Russian rouble has slumped to its lowest level since November 2016, hours after the US announced new sanctions because of the poisoning of an ex-Russian spy and his daughter in the UK.

The rouble-dollar rate reached 66.7 on the Moscow stock exchange. On Tuesday the rouble rate had been 63.4.

Sergei Skripal and his daughter Yulia were poisoned with the Russian nerve agent Novichok in Salisbury in March, though they have now recovered.

Russia denies any role in the attack.

The euro also gained against the rouble, which slumped to a rate of 76.8.

A UK investigation blamed Russia for the Novichok attack. Mr Skripal and his daughter recovered after intensive care in hospital, and their current whereabouts are being kept secret.

The attack prompted the UK and its Western allies to expel many Russian diplomats - and Russia retaliated with its own expulsions.

UK Foreign Secretary Jeremy Hunt thanked the US on Thursday in a tweet. He said nerve agents and other "horrific" weapons must not become a new norm, and "states like Russia that use or condone their use need to know there is a price to pay".

Russia has criticised the new US sanctions as "draconian". 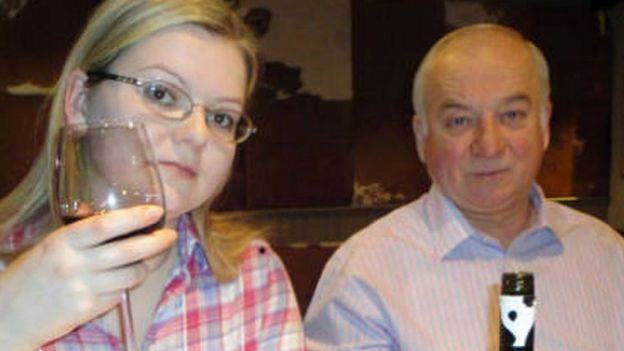 The Russian embassy in the US hit back on Thursday morning. Russia had become "accustomed to not hearing any facts or evidence", it said, adding: "We continue to strongly stand for an open and transparent investigation of the crime committed in Salisbury."

What are the sanctions?

The new sanctions will take effect on or around 22 August. They cover exports of sensitive electronic components and other technologies that can have military applications. There will also be some further restrictions on Russian access to US financial services.

The state department says "more draconian" sanctions will follow within 90 days if Russia fails to give reliable assurances that it will no longer use chemical weapons and will allow on-site inspections by the United Nations.

The threatened measures include a far-reaching trade embargo on Russia - but excluding food - and a ban on Aeroflot flights to the US.

An official said it was only the third time that the US had determined a country had used chemical or biological weapons against its own nationals.

Previous occasions were against Syria and against North Korea for the assassination of Kim Jong-nam, the half brother of leader Kim Jong-un, who died when highly toxic VX nerve agent was rubbed on his face at Kuala Lumpur airport.

Are these the only US sanctions against Russia?

No. In June the US imposed sanctions on five Russian companies and three Russian individuals in response to alleged Russian cyber-attacks on the US.

All are prohibited from any transactions involving the US financial system.

The US and EU also have sanctions in place against dozens of Russian state officials and firms accused of involvement in the 2014 Russian annexation of Crimea and support for the separatist rebels in eastern Ukraine. Those sanctions restrict travel and financial transactions.

After pressure from Republican members of Congress, the state department has determined Moscow broke international law by using a military-grade chemical weapon on the Skripals.

While the US expelled some five dozen diplomats shortly after the poisoning, the administration stopped short of making a formal determination that Russia had broken international law.

But Congress has been pushing for such a decision and now the state department has confirmed Russia's actions contravened 1991 US legislation on the use of chemical weapons. That breach automatically triggers the imposition of sanctions and places requirements on Russia to avert further restrictions in three months' time.

So far President Donald Trump has been silent on this latest move - which could well derail his attempts to develop a new, warmer relationship with Vladimir Putin.

What was the nerve agent?

Following the incident, the British government said the military-grade nerve agent Novichok, of a type developed by Russia, had been used in the attack.

Relations between Russia and the West hit a new low. More than 20 countries expelled Russian envoys in solidarity with the UK, including the US. Washington ordered 60 diplomats to leave and closed the Russian consulate-general in Seattle.

Three months after the Salisbury attack, two other people fell ill at a house in Amesbury, about eight miles from the city. Dawn Sturgess later died while her partner, Charlie Rowley, spent three weeks recovering in hospital.

After tests, scientists at the UK's military research lab, Porton Down, found the couple had also been exposed to Novichok.

Mr Rowley told ITV News he had earlier found a sealed bottle of perfume and given it to Ms Sturgess, who sprayed the substance on her wrists.

Is my boss allowed to spy on me?

Is Turkey heading for an economic crisis?
Previous Item
NEXT