Turkey: Could the US damage its economy?

President Trump has said the US will "devastate Turkey economically" if Ankara decides to attack Kurdish groups in Syria.

Mr Trump was referring to his plan to pull US forces out of Syria, where they have been fighting alongside a Kurdish militia against the group calling itself Islamic State (IS).

The US president's comments drew a sharp response from Turkey, which said Mr Trump would not get anywhere by threatening the country economically.

After Mr Trump's tweet, the Turkish lira dropped in value against the US dollar.

It then recovered its value, suggesting that his remarks had limited impact.

So how could the US damage Turkey economically - if it wanted to?

The relationship between Washington and Ankara has historically been close - politically, economically and militarily.

Turkey - a Nato member - is a vital partner for the US but there have been significant strains in the partnership.

These came out into the open last August, when the US slapped sanctions on Turkey over the continued detention of American pastor Andrew Brunson.

It marked a new low in relations and was a further blow to an already fragile economy.

The US also doubled tariffs on Turkish steel and aluminium that month, leading to further falls in the value of the Turkish lira - some 40% since the beginning of 2018.

Turkey responded in kind, raising tariffs on cars from the US to 120%, on alcoholic drinks to 140% and on leaf tobacco to 60%.

Who does Turkey trade with?

In fact, only 5% of Turkish exports head to the US and Turkey imports only slightly more from there.

But even though overall trade with US is not as large, there are key vulnerable sectors: air transport, iron and steel and machinery - and this is where the US has chosen to target previous sanctions.

Turkey has historically had a deficit in international trade, in that it imports more from the rest of the world than it exports.

However, the trade gap did narrow considerably in 2018 on the back of the weakness of the lira, which made Turkey's exports more competitive and imports more expensive.

Turkey may be vulnerable over its high levels of debt.

As of the end of September 2018, its external debt amounted to over 50% of its gross domestic product (GDP) - the value of all the goods and services it produces in a year - according to official figures.

"It puts the country at the mercy of international investors and makes it vulnerable to exchange rate movements."

There are two features of Turkey's foreign debt increase that are concerning.

It has a relatively high level of short-term debt, which is due for repayment in the near future.

That means having a greater reliance on external finance.

In addition, most of its overall debt is in foreign currencies such as the US dollar and the euro.

So, the debt becomes more expensive as the Turkish currency loses value and other currencies - such as the US dollar - strengthen.

In fact, the lira had been struggling for most of last year, recording its worst decline since 2001.

This currency weakness also aggravates Turkey's persistent inflation problem, which at one point in 2018 peaked at over 25%.

It's important to point out that the Turkish economy has been growing strongly for most of the period since 2001.

But confidence in Turkey was beginning to wane last year over concerns that the economy was overheating due to huge spending and borrowing.

In addition, the Turkish government has taken away some power from the central bank, leading investors to worry about the direction of fiscal policy.

So any fallout with the US could further sour the financial markets' view of the health of the Turkish economy.

"This could lead to a decline in capital inflows and impact the value of the Turkish currency," says economist Gulcin Ozkan. 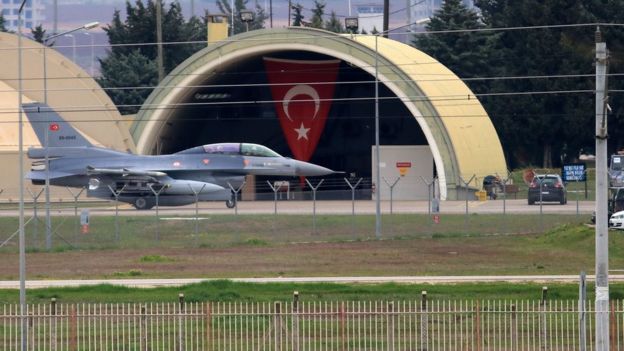 But given the importance of the political and strategic relationship with Turkey, which shares borders with Syria, Iraq and Iran, the US may want to tread carefully.

Turkey is the biggest recipient of US defence equipment after Israel and the UAE and the vast majority of its air force is US supplied.

It also hosts US and Nato forces at its Incirlik airbase, in the south of the country.

So Turkey may be economically vulnerable but politically and strategically it remains very important.

Gold opens 2019 with fanfare
Next Item