Ryanair has come bottom in an annual Which? survey rating the customer services of 100 popular UK brands.

The budget airline achieved a customer satisfaction score of only 45% for 2019. It is the sixth year in a row that Ryanair has come last.

Given a choice of 50 terms to describe the airline, many respondents picked "greedy", "sneaky" and "arrogant".

It comes as Ryanair pilots in the UK strike for a second day over pay and conditions.

The Which? survey asked around 4,000 members of the public to rate the customer services at up to three of 100 well-known brands.

This included how the companies made them feel, how helpful and knowledgeable their staff were, and how well they handled complaints.

Words used to describe Scottish Power included "arrogant", while respondents said that BT's staff were "aloof" and that Virgin Media was "greedy".

Other airlines did badly too, with British Airways coming 83rd on the list and EasyJet ranked 79th. 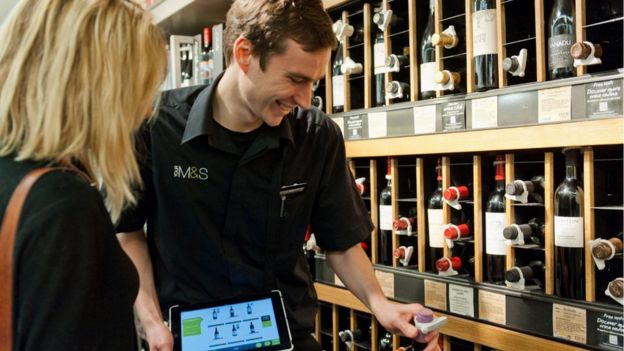 Marks and Spencer, which came second in the survey, was described as having "well-mannered" staff

"It's those firms that have gone out of their way to prioritise customer service as a key part of their business that have topped the survey," said Harry Rose, editor of Which? magazine.

He told the BBC that retailers had done particularly well, while service providers such as energy and telecoms companies had struggled.

"There's a bit of complacency in some of these companies," Mr Rose said. "Customers should hold them to higher standards, they shouldn't put up with it."

Ryanair's poor customer service rating comes as its UK pilots stage a 48-hour walkout this week over pay and conditions.

Passengers had been braced for disruption, but the carrier said 97% of flights took off as normal on Thursday, the first strike action day.

Another 48-hour walkout is planned by the British Airline Pilots Association union in early September to coincide with the end of the summer holidays.

Strikes at Ryanair caused thousands of flights to be cancelled or delayed last summer, angering passengers.

The airline has so far not compensated customers, saying the strikes amounted to "extraordinary circumstances".

But in December the Civil Aviation Authority launched legal action against the airline, saying this breached EU law.

Mr Rose said: "Ryanair has never done well in these surveys, but they've been struggling particularly in the last 18 months with the staff strikes and flight cancellations, so the ill-feeling has only intensified."

ACV appeals for removal of barriers

Outlook for GSE this year positive