Vice-President Dr Mahamudu Bawumia delivering his address at the launch of the Sustainable Banking Principles document in Accra.

The Vice-President, Dr Mahamudu Bawumia, has charged financial institutions in the country to include climate disruption issues in their risk management reports.

That, according to him, would ensure that sustainability issues were incorporated into the responsibility of market actors to guide them in decision making.

It would also help promote a clean environment, increase job creation and accelerate poverty reduction, in line with the government's agenda to achieve the UN Sustainable Development Goals (SDGs), he added.

The disruptions include clients’ inability to service credit facilities advanced to them due to climate change consequences such as excessive heat, rain or flooding.

The Vice-President gave the charge at the launch of the Ghana Sustainable Banking Principles document in Accra yesterday.

The document, which has been adopted for immediate implementation by all universal banks, is expected to guide financial institutions in their operations by considering the social and environmental impact of their business transactions. 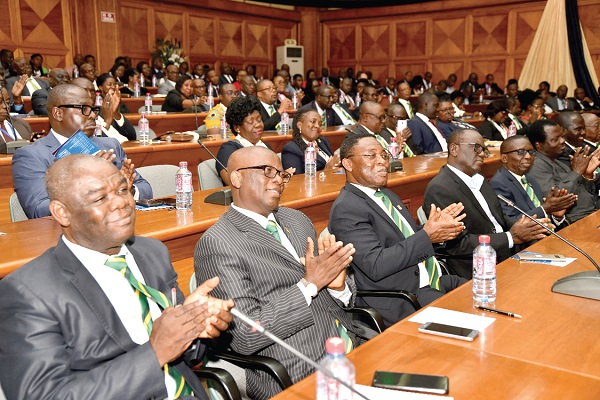 Dr Bawumia said while about $7 trillion was required annually to implement the SDGs globally, developing countries were expected to face an annual investment gap of $2.5 trillion in areas such as infrastructure, clean energy, water and sanitation and agriculture.

“The challenge at the basic level has been how to mobilise the required capital for the inclusion of under-served groups, the mobilisation of funds for sustainable infrastructure development such as energy, housing and transport, and how to finance critical areas of innovation and agriculture,” he said.

“There is no doubt that environmental risks and risks arising from climate change in particular constitute a significant systemic risk to the financial sector.

“Such fundamental changes in the environment could affect economic and financial stability and the safety and soundness of financial firms, with clear implications for central banks,” he added.

The Governor of the Bank of Ghana (BoG), Dr Ernest Addison, said climate change, environmental degradation, changing demographics, among others, were now intertwined with sustainable social and economic development objectives.

“Responsible banking practices would have to ensure that environmental and social risks associated with projects financed by banks are well managed,” he said.

For banks to remain sustainable over the long-term, he said, it was important that their own internal operations and financing activities conformed to the needs of economic agents.

As a result, he said, the BoG recognised Environmental and Social Risk Management (ESRM) as a key component of banks‘ overall risk management strategy.

“We are not alone in this regard.

Central banks and banking regulators around the world have mainstreamed ESRM in their prudential risk assessments, given the potential impact of environmental and social factors on the long-term safety and soundness of banks,” Dr Addison said.

In an interview, the President of the Ghana Association of Bankers (GAB), Mr Alhassan Andani, said proper implementation of the principles would impact positively on the environment and the social well-being of citizens in the long term.

He said organisations and individuals who did business with financial institutions would also have to meet those principles to qualify for financial support.

“The future is sustainability, and being the middle engine that distributes capital, the banks will ensure that they work with entities that are environmentally responsible,” Mr Andani added.

NDC to invest in tomato production

Assembly appeals for a tractor for farmers