Oscars Envelopegate: This is why both PwC accountants have been banned

Quite a few people are wondering why both of the accountants responsible for "envelopegate" at the Oscars have been let go by the Academy, when only one appeared to be responsible.

Brian Cullinan handed Warren Beatty the wrong envelope on Sunday night, which led to the wrong film being announced as best picture.

The Academy's decision not to employ Cullinan and his colleague Martha Ruiz again in the future has led to some wondering why she is also being punished.

Now, one of the stage managers has explained.

Gary Natoli told The Wrap that Ruiz was equally responsible for halting proceedings when the wrong winner was announced, but she failed to step in.

"I was in the wings stage left with Jimmy [Kimmel] when they announced La La Land," he explained.

"We watched for about 10 more seconds, and during that entire time Martha was no more than five feet away from us.

"When La La Land was announced, she did not try to get my attention, she did not say anything. And she's supposed to have memorised the winners."

Natoli added that, before the ceremony, he had specifically told the pair that they should get to the stage "immediately" if any wrong winners were announced. 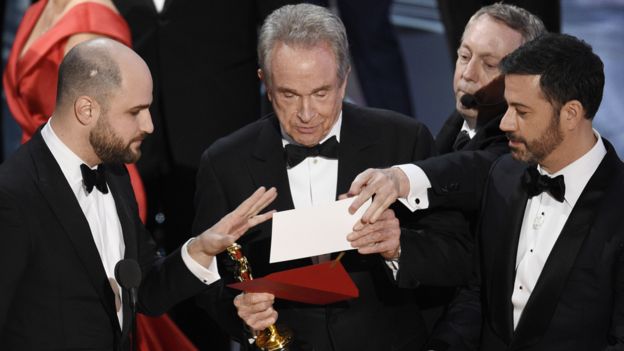 "Brian had done an interview where he was asked about it, so he came up to John [Esposito, another stage manager] and me and told us that in the interview, he said, 'Well, we would tell the stage managers and check with each other and react.'

"I said, 'If you know who the winner is, you don't need to check with each other. You need to immediately go out and rectify the situation, ideally before the wrong winners get to the mic.' And he said, 'OK, good, that's what we thought.'"

'Have Martha check her envelope'

Natoli also gave his own account of what happened on the night from the moment La La Land had been incorrectly announced as best picture.

"I heard John Esposito on my headset say, 'Brian says he didn't think they said the right winner. Can you have Martha check her envelope?'

"That was the first time I heard anything about it."

He radioed another stage manager to find Ruiz and have her open the second best picture envelope.

"[Ruiz] was standing there with the envelope in her hand, very low-key, and John Esposito said that Brian was very low-key too, no urgency. But we had Martha open the envelope, and it said Moonlight."

Natoli said he then instantly told the other stage managers to "Get the accountants out there", but he said both Cullinan and Ruiz hesitated.

"John was trying to get Brian to go on stage, and he wouldn't go," he said. "And Martha wouldn't go. We had to push them on stage, which was just shocking to me." 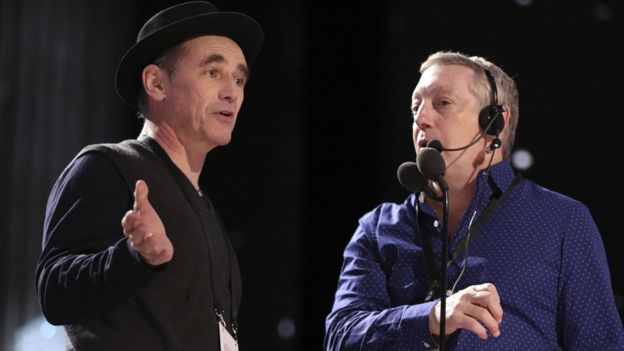 "I didn't get on the headset and say, 'Hey, producers, this is what's happening. What do we do?' We took our own initiative and got it done - and if we hadn't done that, we could have been off the air before it was fixed. I'm proud of the way that we handled it, given the lack of response from PwC."

Natoli also said the new design of the envelopes, with the category printed in a much smaller font than previous years, may have contributed to the error not being spotted sooner.

"I'm sure they're very lovely people, but they just didn't have the disposition for this," Natoli said. "You need somebody who's going to be confident and unafraid."