Aladdin and Jasmine are played by Mena Massoud and Naomi Scott

You might think the lead character in Aladdin is... well, Aladdin. But not according to the end credits of Disney's new live-action remake.

Unlike the animated 1992 original, the genie is the first name seen in the new cast list - which is understandable given that Will Smith is the biggest name in the project by some distance.

Disney has opted for two relative newcomers for the roles of Aladdin and Jasmine - in the shape of Mena Massoud and Naomi Scott.

It was reported at the time of casting in 2017 that around 2,000 actors and actresses had been reading for the two roles over several months.

"The casting process was intense," Massoud tells BBC News. "I've been watching this film since I was a kid, and when I saw the audition notice I threw myself at it.

"And I didn't hear anything for four months, so I was a little disappointed, but I kind of moved on as any actor has to.

"Then when we heard back it was an intense [process], but I'm glad I'm here now."

Riz Ahmed and Dev Patel had been linked with the title role, but the longer it remained vacant, the more Disney began looking at fresher faces instead.

"Disney's magic carpet ride has hit a bit of turbulence," The Hollywood Reporter said at the time. 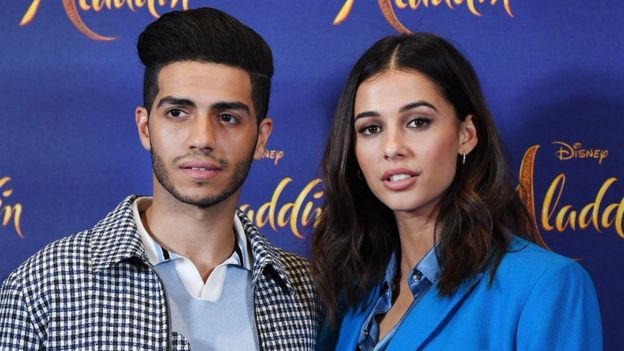 "Finding a male lead in his 20s who can act and sing has proven difficult - especially since the studio wants someone of Middle-Eastern or Indian descent (the animated film is set in the fictional Middle Eastern city of Agrabah).

"The search has dragged on, with Disney and [director Guy] Ritchie having to go back to the drawing board multiple times."

But the finished product has broadly gone down well with critics, if the first reviews are anything to go by.

"On the whole, Ritchie's adaptation wisely does little except add human flesh to the bare bones of what was always one of Disney's strongest stories," said Steve Rose in The Guardian.

Geoffrey Macnab of The Independent described it as "a rip-roaring, old-fashioned matinee-style spectacle that turns out far better than we had any right to expect".

In a three-star review for Digital Spy, Ian Sandwell said it was an "enjoyable retelling", but was less keen on the "overlong, drab and CGI-heavy finale".

Will Smith's portrayal of the genie has also defied the sceptics, with Ben Lawrence in The Telegraph saying he "does a terrific job in bringing his own brand of manic chutzpah to the part".

"Indeed Smith offers some much needed amplification to a film which (a third of the way through) is in danger of being lost in its over-prettified storytelling."

Massoud says "there's a fine balance" to be struck by studios when it comes to casting leading roles.

"I think we need to get to a point in the industry where we just cast the right person, the person that's right for the role," he says.

"Now, with so much content coming out in both television and film, I think a lot of actors are getting their shot at things more than before, but I think it just comes to casting the right person for the role."

Scott is surprised to learn just how many actors read for the parts of Jasmine and Aladdin, but adds she wasn't pinning all her hopes on being cast.

"I had a really strong idea of what I wanted to do with this character, which I think gave me peace. Because I was like, 'I'm going to put out there what I feel it could be or should be.

"And if that's what they want then great, but if it's not, then it's probably not for me anyway, you know?"

She also applauds any film studio willing to take a chance on hiring a newcomer for a role.

"It's really important to take risks when casting," she says. "Also, just busting some myths about what makes money." 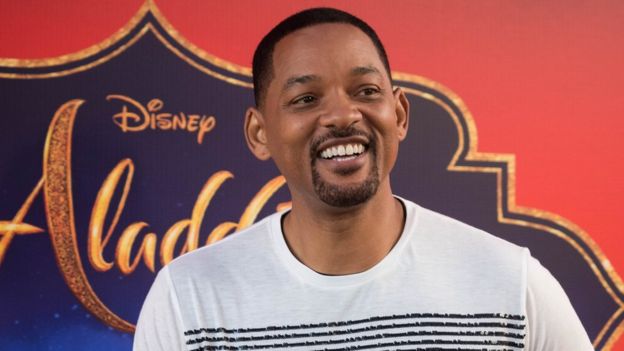 Interviewing Massoud and Scott is an interesting experience - as they have opposing personality types.

Massoud is quiet and succinct with his answers. Scott is lively and energetic.

Yet on screen, the pair have good chemistry and had to go through screen tests with each other before Disney made its final casting decisions.

Both lead actors have other credits to their name - Scott was seen as Kimberly (the pink ranger) in 2017's The Power Rangers, for example.

But this is the first time either of them have taken on a role of this scale.

The attention has come thick and fast for Scott - who graced the cover of British Vogue last month.

The first time Massoud, Scott and Will Smith were seen in costume was in December, on the front cover of Entertainment Weekly.

But Smith soon used his Instagram account to reassure fans that, panic over, he was going to be blue.

"This [magazine cover] is how the Genie is in human/disguise form. My character will be CGI most of the movie."

"I think we live in an era now where social media and the internet, it's trial by Twitter, as they say," Massoud says.

"But having said that I think they'll be incredibly happy with this film, and I hope people love it, we certainly put our hearts and souls into it."

Smith arguably has the biggest weight of expectation, stepping into the intimidating role of the genie - made famous by the late and much-loved Robin Williams.

"I was terrified of that," Smith admits. "Robin didn't leave much room for improvement in the genie.

"So the first thing I thought about was that it was going to be live action, so I knew that would give so many opportunities and that it would feel different.

"They captured something that was something for a generation. When you're marking people's childhoods.

"I wanted to create an homage to Robin and to the performance, with the songs and everything, that people would still connect, but then be able to add the new hip-hop flavour."

Give filmmakes tax rebates on equipment

Will SMith goes from fear to joy
Next Item