The Tiger Who Came To Tea author Judith Kerr has died at the age of 95, her publisher HarperCollins says.

Charlie Redmayne, head of her publisher HarperCollins, said she was "a wonderful and inspiring person who was much loved by everyone".

Kerr, who published more than 30 books over a 50-year career, dreamed up the tiger to amuse her two children.

Charlie and Lola author Lauren Child said she was a "huge admirer of her work, as a writer and an illustrator".

Redmayne added: "She was a brilliantly talented artist and storyteller who has left us an extraordinary body of work.

"Always understated and very, very funny, she loved life and loved people - and particularly she loved a party."

He said that "time spent in her company was one of life's great privileges and I am so grateful to have known her".

Children's author and TV personality David Walliams added: "I am so sad to hear that Judith Kerr has died."She was a legendary author and illustrator, whose stories and illustrations gave pleasure to millions around the world, not least me and my son. Judith is gone but her books will live on forever."

As a child of the pre-war German intelligentsia, Kerr was forced to flee with her Jewish parents when Adolf Hitler came to power.

She wrote about her childhood and her status as a refugee in a trilogy of books for children, the first of which was When Hitler Stole Pink Rabbit, which became a set text in German schools.

Francesca Simon, author of the Horrid Henry children's books, told BBC Radio 5 Live she was "feeling so sad about this". 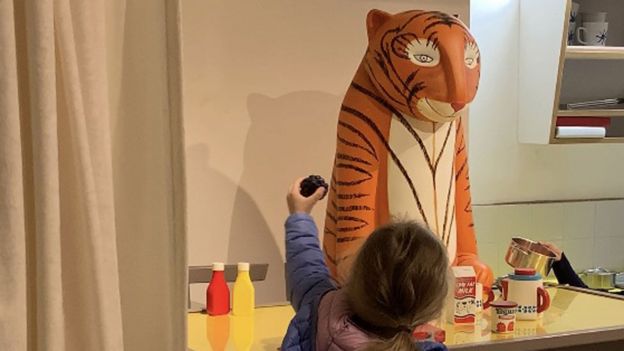 She said of Kerr's famous Tiger tale: "It is a perfect book, because it is a mysterious book.

"On the surface it's a very simple story. It's a tiger who comes in, and is this guest who you're not sure about. But her stories also have this undertone of emotion, which is I think why we keep going back to them, to kind of delve into their mysteries.

"As well as the most beautiful and glorious illustrations. Her artwork is fantastic.

'Forever in our imaginations'

"And I love, as a writer myself, that she was writing and illustrating up to the end. In fact I was just trying to get tickets to see her at Hay-on-Wye next week. So I love her continuous engagement with her profession. To me that's unbelievably inspiring."

BBC Newsnight presenter Emily Maitlis once asked Kerr if there was any layered meaning beneath The Tiger Who Came to Tea, but was set straight by the author.

TV talk show host Jonathan Ross described her most famous work as being "a huge part of my children's life and I loved reading it for them."

"I doubt there is a more perfect children's book then The Tiger who came to Tea," he tweeted.

"Goodbye Judith Kerr," he said, "All my four boys have adored you and I've loved reading your work to them. Forever on our bookshelves and in our imaginations."

Kerr's publisher at HarperCollins, Ann-Janine Murtagh, said it had been "the greatest honour and privilege to know and publish Judith Kerr for over a decade", describing her as a person who "embraced life as one great big adventure and lived every day to the full".

Eminem criticised for rap about bombing