They officially ended their feud last week, but now Katy Perry and Taylor Swift have taken their friendship to the next level.

The pair star in Taylor's new music video for single You Need To Calm Down.

The video has a focus on supporting LGBT people and stars celebrities such as Ellen DeGeneres, RuPaul and the cast of Netflix series Queer Eye.

But fans were in for a surprise when Katy appeared, hugging Taylor while dressed as a large burger and chips.

Taylor revealed that they thought up the ending together.

In an interview with Greg James that airs on the Radio 1 Breakfast Show on Tuesday morning, she says the process of making up with Katy has been "a positive turn" in her life.

"I asked her if she'd be interested in this and Katy said, 'I'd love for us to be a symbol of redemption and forgiveness'.

"I feel the same way about it."

After the video debuted, they both shared screenshots of the video on social media showing them hugging.

Katy wrote "This meal is BEEF-free" in her caption, while Taylor wrote "A happy meal".

An on-screen message ends the video: "Let's show our pride by demanding that, on a national level, our laws truly treat all of our citizens equally."

It asks for viewers to support a petition.

"I just feel really strongly about our governments wanting to protect everyone," Taylor tells Greg James.

"We are very behind on that in my country."

Taylor has been more politically vocal about supporting LGBT rights over the past year.

In April she donated £86,000 to an LGBT advocacy group in Tennessee, USA - afterwards, she wrote that she was feeling "inspired" by their work.

Last October the 29-year-old spoke out politically for the first time, endorsing two Democrats in the US mid-term elections, basing her decision on equal rights.

Taylor and Katy's feud has spanned several years, ending last week when the pair shared a picture of some cookies with "peace at last' written on the plate.

Katy tagged Taylor in the post and captioned it "feels good", while Taylor commented with 13 heart emojis. 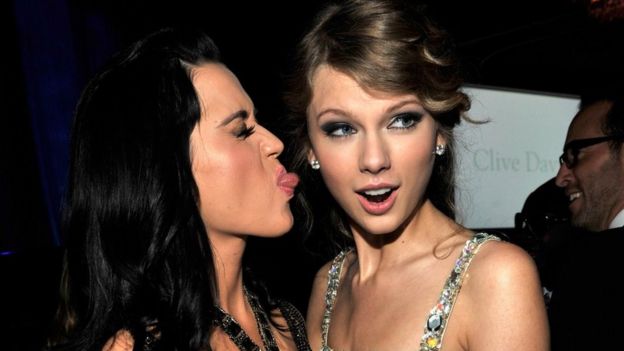 They reportedly fell out five years ago in a row over backing dancers, before writing songs about each other.

Taylor's Bad Blood is thought to be about Katy, while Swish Swish is said to be about Taylor.

At the time Taylor told Rolling Stone magazine that someone did something "so horrible" that made them "straight-up enemies" because they "basically tried to sabotage an entire arena tour".

Avengers and GoT win big at MTV awards
Previous Item
NEXT