Sir Lucian Grainge with Sheryl Crow and Elton John, both of whom are said to have lost music in the fire

A week after it was revealed that Universal Music's archive had been devastated by fire, the company's boss has described the losses as "painful".

In an email to staff, Sir Lucian Grainge said, "the loss of even a single piece of archived material is heartbreaking".

"We owe our artists transparency. We owe them answers".

Up to 500,000 recordings were destroyed by a fire at Universal Studios in 2008, the New York Times reported last week.

Original recordings by the likes of Chuck Berry, Howlin' Wolf, Aretha Franklin, Elton John, Nirvana, Eminem and Snoop Dogg are likely to have been destroyed - although an unknown quantity of them were digitised before the incident took place.

Many of the recordings were said to be master tapes - the original studio source material from which commercially-released music is drawn; and which often contain alternate takes or unreleased songs that later become the basis for box sets and archival releases.

Universal Music downplayed the New York Times' story, citing "numerous inaccuracies" in its reporting and a "fundamental misunderstandings of the scope of the incident".

'I will own this'

In his letter to staff, Sir Lucian, who became global CEO of Universal Music in 2011, said he was "somewhat relieved by early reports from our team that many of the assertions and subsequent speculation are not accurate".

However, he appeared to concede the losses had been extensive.

"Even though all of the released recordings lost in the fire will live on forever, losing so much archival material is nonetheless painful," he said.

"These stories have prompted speculation, and having our artists and songwriters not knowing whether the speculation is accurate is completely unacceptable."

"I will ensure that the senior management of this company, starting with me, owns this."

He added that a specialist team had been established to investigate and respond to artists who were worried about the status of their recordings.

Last week, the official R.E.M Twitter account said it was "trying to get good information to find out what happened and the effect on the band's music, if any". 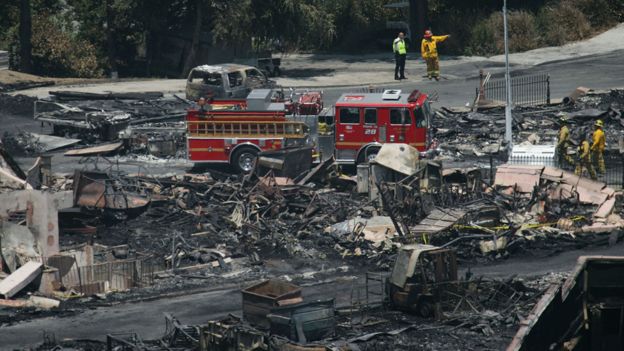 More than 100 firefighters battled the backlot blaze in 2008

"This has a potentially huge impact on their future, coupled with the rather disturbing fact that no one ever told them that their intellectual property may have been destroyed. There is a significant amount of discussion going on, and there will be formal action taken," he told the LA Times.

Although he declined to name his clients, Mr King said there were "more than 10 but fewer than 100" artists taking action.

He has written to Sir Lucian demanding "a complete inventory of all master recordings, including finished sound recordings as well as outtakes, that were destroyed in the fire".

Universal Music, or UMG, is the world's largest recorded-music company, with a market share of 31% last year.

Among the hundreds of artists said to have lost music in the 2008 fire are masters by Billie Holiday, Louis Armstrong, Duke Ellington, Al Jolson, Bing Crosby, Ella Fitzgerald and Judy Garland; as well as some of Chuck Berry's greatest recordings, the masters of some of Aretha Franklin's first appearances on record, almost of all of Buddy Holly's masters and John Coltrane's masters in the Impulse Records collection.

Can Depp’s career survive his trial?

Michele’s tribute for Obama on his birthday

Stars back ‘Ellen’ amid claims