Lewis Capaldi and Dave are leading the nominations at this year's Brit Awards, which will see Jack Whitehall once again host the ceremony.

The number of awards has been cut, as organisers promise more music and fewer acceptance speeches.

Tuesday night will mark the 40th Brit Awards ceremony in total - the first ceremony actually took place in 1977, but it didn't become an annual event until 1982.

The Brits have provided many memorable moments over the decades. Here are 10 moments that will be kept for the archives.

1. Madonna's unscheduled trip down the stairs 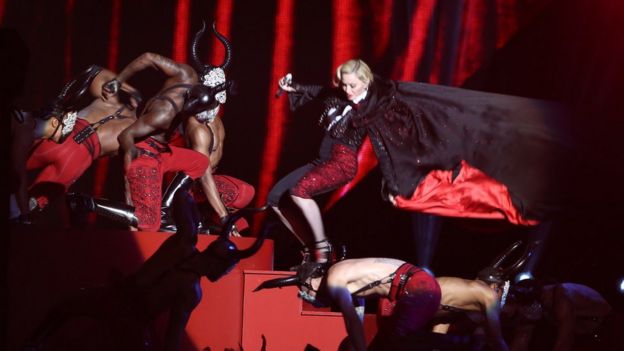 The star's long, flowing cape did not detach as rehearsed earlier in the day. As a result, the dancer who was supposed to sweep the gown away actually swept Madonna off her feet and down a flight of stairs with a sickening thud.

Madonna proved her professional status by picking herself back up and carrying on as if nothing had happened.

"I had little bit of whiplash, I smacked the back of my head," she later recalled on The Jonathan Ross Show. "And I had a man standing over me with a flashlight until about 3am to make sure I was compos mentis." 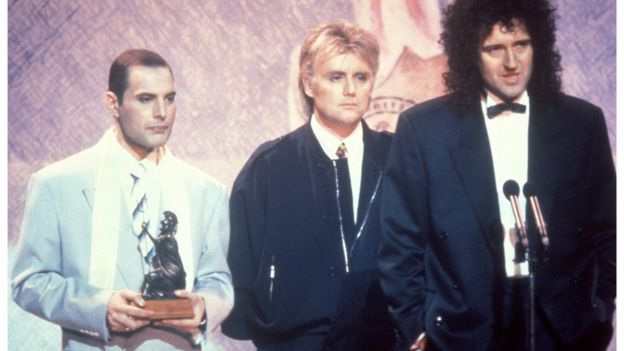 Queen frontman Freddie Mercury made his final public appearance while collecting an outstanding contribution award at the 11th Brit Awards in 1990.

Fans were used to seeing the dynamic singer dominate the stage but, on the night, guitarist Brian May spoke on behalf of the group. A gaunt-looking Mercury ended the speech with a simple, "Thank you, goodnight".

It wasn't public knowledge at the time that the star had been diagnosed with Aids three years earlier. Even the band weren't informed at first.

"We actually didn't know what was wrong for a very long time," guitarist Brian May later recalled. "We never talked about it and it was sort of unwritten law that we didn't. He just told us that he wasn't up to doing tours, and that's as far as it went."

Mercury died in 1991, a day after making his diagnosis public.

3. "Theresa May, where's the money for Grenfell?" 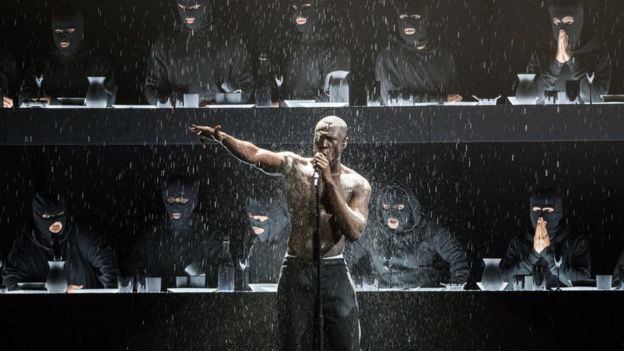 Stormzy closed the 2018 ceremony with a rebuke to then-prime minister Theresa May for her handling of the Grenfell Tower Fire.

In a furious rap, he demanded: "Theresa May, where's the money for Grenfell?"

He then accused the government of hoping the public would forget about the disaster, adding: "You're criminals, and you got the cheek to call us savages. You should do some jail time, you should pay some damages. We should burn your house down and see if you can manage this."

At the time, the government said it had pledged £58.9m for Grenfell, of which £30m had been spent.

A year after the tragedy, Theresa May wrote in the Evening Standard that "the initial response was not good enough". 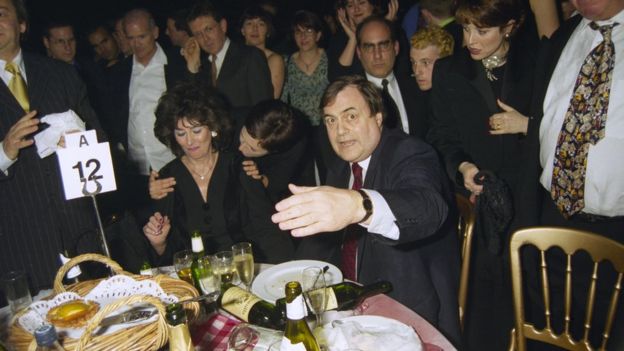 Image caption John Prescott and his wife shortly after getting soaked, 1998

Deputy Prime Minister John Prescott was happily watching Fleetwood Mac play Go Your Own Way at the 1998 Brits when Danbert Nobacon, from the anarchist pop band Chumbawamba, leapt onto his table and emptied a bucket of iced water over him and his wife.

"That's for the Liverpool dockers!" he screamed, in reference to New Labour's inaction over a two-year labour strike in Merseyside.

Chumbawamba had previously opened the ceremony by performing their hit single Tubthumping, changing a section of the lyrics to: "New Labour sold out the dockers just like they sold out the rest of us".

Prescott called the incident an "utterly contemptible" and "cowardly" publicity stunt; and Nobacon was handed to police by his fellow band-member, Alice Nutter. He was later released after the Welsh politician declined to make a formal complaint.

Fourteen years later, Prescott got his revenge on Twitter, following the news that Chumbawamba had split up. 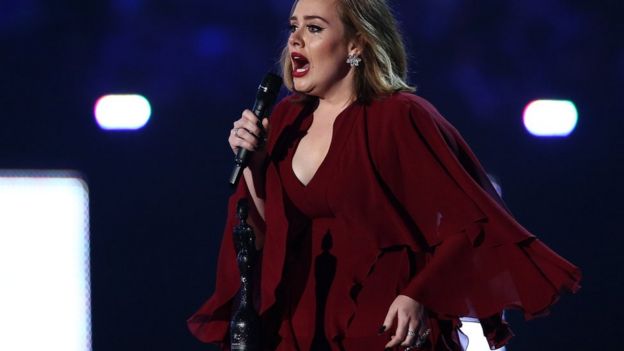 Adele has a lot of history with the Brits.

She brought the ceremony to a standstill with her performance of Someone Like You in 2011, and was memorably cut off during an acceptance speech to make way for Blur the following year.

But a moment you may have forgotten about came in 2016, when the Tottenham-born musician lent her voice to the #FreeKesha movement during her acceptance speech.

Picking up the award for best female, Adele announced: "I'd like to thank my label for embracing the fact that I'm a woman and being encouraged by it. And I'd also like to take this moment to publicly support Kesha."

At the time, the Kesha was embroiled in a legal battle with her producer, Dr Luke, who she'd accused of mentally and sexually abusing her.

He denied the "false and shocking accusations" and counter-sued for defamation and breach of contract. The case is still rumbling on.

Kesha's case preceded the #MeToo movement - but the music industry is still struggling to address issues of sexual harassment and gender equality.

This year's Brits have been criticised for a lack of female nominees, with no women being shortlisted for the night's main prize, album of the year. 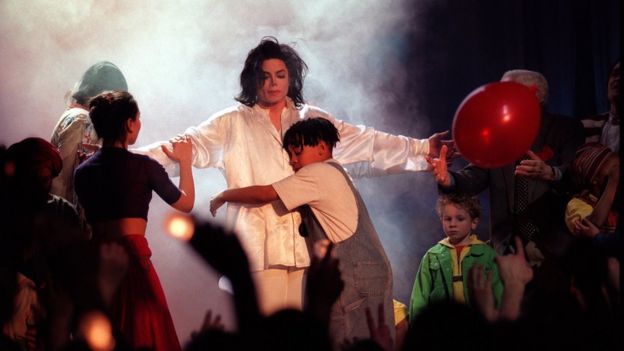 This is the one everyone remembers, even though it was edited out of the TV show.

In 1996, Michael Jackson dropped into the Brits for an understated, low-key performance of his quietly contemplative single Earth Song.

Oh, alright then, it was totally nuts. Jackson portrayed himself as a Christ-like figure, offering succour to the pleading children and adults that surrounded him as he howled a bombastic, seven-minute song about environmental disaster.

When the star stepped onto a crane and soared above the audience, Pulp's Jarvis Cocker had had enough. He walked on stage, looked around in disdain, then turned his back on the audience and wiggled his bum.

Asked to explain the incident later that week, the singer responded: "I was just sitting there and watching it and feeling a bit ill, because he's there doing his Jesus act.

"I just thought: 'The stage is there, I'm here and you can actually just do something about it and say this is a load of rubbish if you wanted'."

Jackson issued a statement saying he was "sickened, saddened, shocked," and, just in case you hadn't got the point, "upset and angry".

But other audience members took Cocker's side. When the musician was taken to a nearby police station for allegedly punching and knocking over three of the children on-stage with him, comedian Bob Mortimer, a former solicitor, offered to represent him. Men Behaving Badly's Martin Clunes and Neil Morrissey staged a "Free Jarvis" campaign outside.

The next day, musician Brian Eno said the stage protest was completely justified. 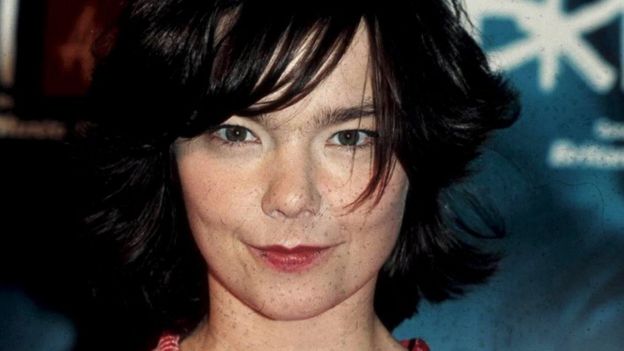 Bjork has won the best international female category more often than any other artist, taking the title four times over the last 26 years.

She's never been completely comfortable with the accolade, though. In 1996, as Goldie presented her with the trophy, she bashfully buried herself in his jacket before muttering a simple "thank you".

Two years later, she came prepared with a speech. "I am," she said solemnly, "a grateful grapefruit". 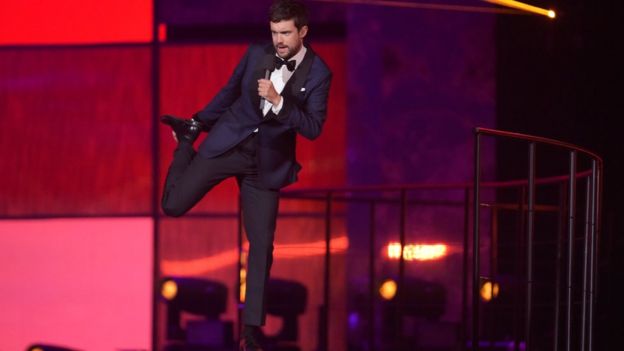 Jack Whitehall took over as Brits host in three years ago, and instantly made the role his own with a series of savage one-liners.

"If you like Adele songs but find them too upbeat you're in for a treat," he announced in 2018. "Sam Smith is performing."

But he drew the most attention by taunting Good Morning Britain presenter, Piers Morgan, over his clash with girl group Little Mix.

"Piers Morgan didn't like that picture where you stripped off naked," he informed the band. "Which is weird because, you know, voluptuous breasts and four chins - it must be like looking in the mirror for him."

Whitehall and Morgan sparred about the joke later; but eventually buried the hatchet when Whitehall appeared on Good Morning Britain. 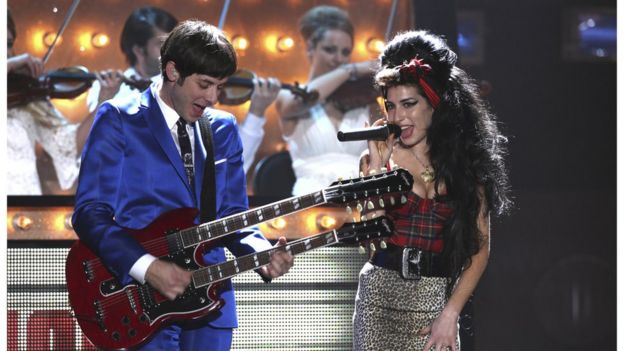 In late 2007 and early 2008, Amy Winehouse's personal life was threatening to overshadow her musical talent.

With her husband in prison, the star's concerts became increasingly shambolic. She appeared drunk or exhausted or both, slurring her words and bursting into tears between songs.

Then, in January, video footage emerged that allegedly showed the star smoking crack cocaine. She was quickly admitted to rehab; and all future performances were scrapped.

A month later, on the night of the Brit Awards, her appearance was still listed on the running order as "TBA".

But when she joined Mark Ronson on stage for a celebratory version of Valerie, it felt like the old Amy was back. Dressed in a tartan bodice, with a gravity-defying beehive, she coiled her distinctive voice around the melody with a sense of pure joy.

It remains one of her best televised performances; and was rewarded with the loudest applause of the night.

She went on to perform her own single Love Is A Losing Game and, although she wasn't nominated for any prizes that evening, she went on to win record and song of the year at the Grammys in LA. 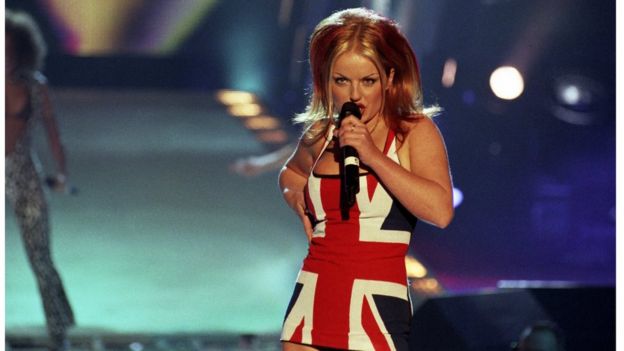 Geri Halliwell's "favourite outfit ever" became an icon of British pop - but it wasn't the star's first choice for the Spice Girls' 1997 Brit Awards performance.

Ginger Spice was originally meant to wear a black Gucci dress, but had a last-minute change of heart.

"Two nights before, Geri said, 'You know what, Emma, I'm really not comfortable with the dress I'm wearing, I've got a much better idea," recalled stylist Emma Poole in an interview with The Telegraph.

"I'm going around to my sister's, she's got these Union Jack tea-towels, I'm going to make a dress.'"

Her hunch paid off. Halliwell was on the cover of every newspaper the following morning, and Harpers Bazaar declared the garment one of the top 10 most sensational dresses of all time.

But did you know that the dress's back panel didn't continue the patriotic theme? Instead, it carried a giant CND logo.

Highlights from the Golden Globes