President Nana Addo Dankwa Akufo-Addo on Wednesday launched the seven-year Coordinated Programme of Economic and Social Development policies of the government, saying the agenda for job creation, prosperity and equal opportunity for all was on course.

He said a number of key initiatives captured under the agenda had been implemented and that the rest would be rolled out soon.

He was, therefore, optimistic that with the launch of the plan, the vehicle bringing about the transformation Ghanaians yearned for and which would culminate in speedy progress and prosperity for all was on course.

“I am inviting all Ghanaians to buy into this vision and make it happen because it provides a clear route to progress and prosperity,” he said.

He enlisted the support of all Ghanaians to buy into the vision and play defined roles in creating a new era of hope and prosperity for all Ghanaians.

President Akufo-Addo maintained that the agenda for job creation, prosperity and equal opportunity for all was a timely intervention that would propel the country to a status beyond aid.

Consequently, he announced that all metropolitan, municipal and district assemblies (MMDAs) were obliged to develop their medium-term programmes in line with the overall agenda of the seven-year plan.

He, therefore, appealed to the private sector to partner the government to play key roles in the attainment of the vision as captured in the plan.

He also charged civil society to live up to its watchdog role in ensuring that society had value for all the interventions being implemented to reap the full benefit of the policies and programmes of the government.

According to the President, the people of Ghana voted massively for change in the December 2016 general election because they had become dissatisfied with the direction the country was going.

A new era of hope

The vision of the government, as captured in the 2016 manifesto of the New Patriotic Party (NPP), encapsulated the desires of Ghanaians to see a remarkable change in their lives that will usher them into a new era of hope and prosperity.

Being in a hurry to usher Ghana into a realm beyond aid, President Akufo-Addo said he had, within a record time, prepared and submitted his seven-year development plan to Parliament and thus had become the first President in the Fourth Republic to have prepared his plan within two years of coming into office.

He recounted that the challenges that his administration inherited required a new and different approach to put the economy on track towards growth, expansion and prosperity.

Therefore, he explained that the agenda for change, as captured in the seven-year plan, provided the anchor for “a new hope, a new vision and a new future”.

That future, he said, would be one in which Ghana would be an optimistic, self-reliant and prosperous nation that exploited its natural resources to create equal opportunities for all. 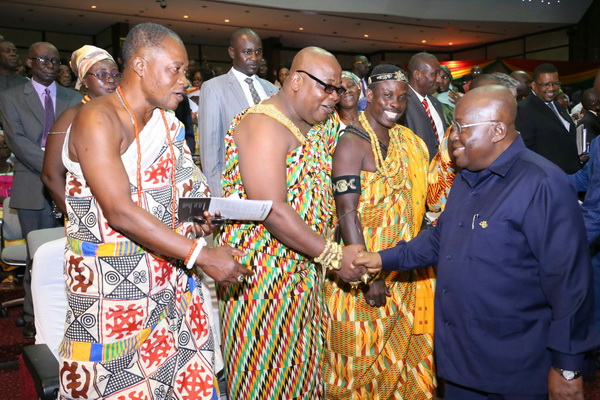 The charge to the government, he said, was to build a resilient economy for businesses to thrive, adding that that could only be achieved by the government creating the enabling environment, as well as instituting all the measures that promoted the expansion of existing businesses and provided a smooth platform for start-ups.

In achieving that, the President stressed the need for an effective fiscal policy management, describing that as being pivotal to the attainment of the vision.

He also underscored the need to develop a world-class workforce, saying the government would resource departments and other allied institutions to ensure that the Ghana labour market information system was effectively operationalised.

He was also of the view that in the past, governments had not paid much attention to research and innovation.

His administration, he said, would resource the Council for Scientific and Industrial Research (CSIR) and allied research institutions to lead the introduction of innovation through research.

The Minister of Planning and Development, Professor George Gyan Baffour, under whose watch the policy was made possible, said the document, which was the expression of the vision of the government, was to guide the planning, policy decision making, measurement and assessment of government programmes.

He said the launch of the comprehensive document had brought the national development process to the fore and represented the desire of the President and the government to let Ghanaians own and share the chosen development path of the nation.

The co-ordinated programme, according to him, also captured the divergent aspirations of the people into a formidable shared vision which would be translated into plans, programmes and actions to be pursued in all districts, regions and sectors of the country.

Prof. Gyan Baffour said the President was enjoined by Article 36 (5) of the 1992 Constitution to present his co-ordinated programmes of economic and social development policies, including agricultural and industrial programmes at all levels and in all regions, to Parliament within two years of assuming office

“The coordinated programme, therefore, outlines the vision of the President for the country, offers a comprehensive diagnosis, an analysis of the country’s socio-economic challenges and presents new approaches to addressing them.

“The policy gives a clear sense of direction to the country on the development path which the country will follow and guidance for future budgets,” he added.

He said out of the four vision documents prepared by the country, the coordinated programme of economic and social development policies was the only one to be presented to Parliament and within two years on assumption of power by the President.

He stressed the need for a new planning culture in the country and called, among others, the private sector, students, civil society groups and all Ghanaians to own the document, as well as be good ambassadors in disseminating the information.

“The document must be the subject of our discourse at all levels and in all regions,” he added.

Tracing Ghana’s efforts at achieving the goals as enshrined in the SDGs, the Majority Leader in Parliament, Mr Osei Kyei-Mensah-Bonsu, emphasised that even before the UN could come up with the goals, Ghana’s Constitution had encapsulated the SDGs in working to ensure sustainable development.

“The document for economic and social development is a national vision and not a partisan vision,” he said.

“It appears there is a missing link in the countrys decentralisation, which is at the district level,” he added.

The Majority Leader, therefore, called for an intermediary body to synchronise all the efforts if there was the need for a review for the Constitution, pointing out that the launched document must be the mirror to reflect and judge the government in its forward march.

The Minority Leader, Mr Haruna Iddrisu, in his remark, commended President Akufo-Addo for being the first to honour a constitutional requirement by sending the document to Parliament in record time.

“I may disagree with your vision, but I may be compelled to accept its successful outcome,” he added.

He told President Akufo-Addo to consider the political opposition as a loyal reminder.

He said he shared in the President’s vision of moving the country beyond aid, saying: “It is a shared idea that we must move beyond aid and create a self-reliant Ghana.”

He urged the President to create the enabling environment for the private sector to thrive, since “it remains the incubator for job creation”.

Ghana has lost 30-40 percent of its wetlands