More traffic lights down in Accra

The problem of faulty traffic lights in Accra has reached alarming proportions, with at least 100 traffic lights at 28 major intersections either down or malfunctioning.

This has made drivers and pedestrians vulnerable to road accidents and knockdowns.

Some of them were on major routes where vehicles were usually held up in gridlock, resulting in eight per cent of the public depending on outlawed motorbikes, popularly known as ‘Okada’, to beat road congestion, according to a 2018 research by the World Bank.

Records at the Department of Urban Roads (DUR) indicate that some of the abandoned traffic lights are as old as 20 years and need replacement.

During an inspection of some of the sites in the national capital yesterday, the Daily Graphic observed that while there were single traffic lights not working on some routes, the devices were not working at all at some major intersections.

Although policemen from the Motor Traffic and Transport Department (MTTD) and the community police have been deployed on some of the routes, they tend to be active only during the rush hours.

By midday most of them leave the roads, allowing build-ups and driver indiscipline to take over as motorists try to outdo one another at some intersections.

The Daily Graphic, on February 21, 2018, drew attention to the breakdown traffic lights in parts of the country, some of which had been out of service for more than a year.

But officials of the Department of Urban Roads (DUR) explained that the problems varied from temporary challenges such as power trips/surges, power outages and stealing of cables to the dumping of refuse into the controllers.

Almost nine months later, most of the traffic lights are yet to be fixed, with more going off the grid. 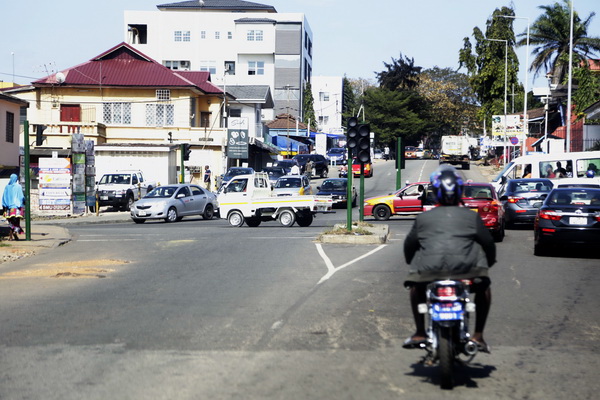 During today’s checks, all the traffic lights at the intersection near the Graphic Communications Group Limited, the Graphic Press House, the COCOBOD Headquarters, the NIB office in Accra Central, the Rawlings Park and CMB were seen not to be functioning.

Similarly, those at the environs of the Kwame Nkrumah Interchange — in front of the Vodafone Office, the Orion Cinema, the GCB Bank, the Ridge Taxi Rank and the ECOBANK branch near the Adabraka Market — were down.

The situation was the same on the Kanda Highway heading towards the roundabout near the Kanda Flats, at Kanda 441, the Total Bus Stop heading towards GBC, the Gold Coast Securities Office and the Ako Adjei Interchange on the Ring Road.

Besides, traffic lights at two intersections directing traffic onto the N1 at the Achimota Overhead were totally off.

The same applied to the traffic lights at the Alajo Junction.

At some of the intersections, although most of the traffic lights were working, a few were off, posing a threat to motorists who sometimes got confused about sudden acceleration from the other side.

The last group of traffic lights are those on perpetual amber. They are at intersections leading to the Kotoka International Airport from the Cantonments Post Office and the Burma Camp.

The Head of Communications at the National Road?Safety Commission (NRSC), Mr Kwame Atuahene, told the Daily Graphic that the issue was of grave concern and that the commission would draw the attention of the DUR to the issue, given that it had safety consequences.

Most of the traffic lights which were not working were not powered by solar energy, which the DUR, under the Ministry of Roads and Highways, began rolling out in 2014.

Phone calls and text messages to the DUR yesterday were not responded to, but in February this year its  engineer in charge of Development and Traffic, Nana Kwame-Fori Obuobi, had said in the case of the traffic lights at the Kwame Nkrumah Interchange, a sub-contractor who installed the gadgets during the construction of the interchange had been contracted to remedy the situation.

In the case of the Graphic Road traffic lights, he had said there was a temporary power problem that would be fixed before the end of March this year, while the one directing traffic to COCOBOD/Kantamanto had a problem with power source.

Nana Obuobi said the DUR was holding discussions with the Electricity Company of Ghana (ECG) to find a solution to the problem.

In the case of those at the Total Bus Stop near GBC and the Achimota New Station Shell, he said the DUR had received approval to completely replace the system with LED traffic lights and upgrade the controller because it was more than 20 years old.

But almost nine months later, the traffic lights are still off.

He said a major problem for Accra had been people vandalising the controllers and stealing voltaic stabilisers and cables to sell.

He accused some residents of Nima and Maamobi of throwing refuse into the controllers, thereby inviting rats to chew the cables at the traffic lights at Kawukudi, while others had either vandalised or stolen the cables.

According to the DUR, in all there were 239 intersections with traffic lights in the city. Out of the number, there are 31 solar-powered intersections under maintenance, with total intersections, including those still under defect liability, standing at 72.

The traffic lights are managed by three companies — Facol Roads (36), Signal and Controllers (43) and Angel Data (92), with the rest being under warranty.

In 2014, the DUR rolled out a project to power traffic lights in the city with solar energy.

The move became necessary because it wanted to eliminate chaos at road intersections in the city, often caused by power outages.

Currently, 31 intersections, including the Achimota Neoplan, the Nationalist Park, the American House, Kawukudi Junction, the Jubilee House and the Fiesta Royale Hotel, run on solar power.

The DUR engaged a local contractor, A2Z, to install the traffic light panels and batteries for the six intersections and intends to do same for the traffic lights on the George Walker Bush Highway (N1 Highway).

Millions to Celebrate PR on July 16

Close down schools if strike persists