The Minister of Information, Mr Kojo Oppong Nkrumah has explained that contrary to claims of an increase in the staff establishment numbers at the Office of the President, the number is rather reducing by 69 in 2019.

In 2017, President Nana Addo Dankwa Akufo-Addo forwarded a list of 998 staffers and ministers of state at the Office of the Presidency (OOP) [Jubilee House] to Parliament for purposes of accountability.

The list, which was for the period January 7, 2017 to December 31, 2017 was in line with the constitution and the Presidential Office Act 1993 which enjoins the Presidency to annually brief Parliament on the list of persons who work at the Presidency.

The 998 list, which includes ministers of state at the presidency, persons working directly at the office of the president, senior presidential advisers, presidential staffers, and presidential aides and employees of other Public Services assigned to the Office of the President generated a public discussion with some saying the number was on a high side whilst government explained that the number of staffers at the Presidency should not be a matter of concern but a commitment to protect the public purse should be the issue.

The then Information Minister, Dr Mustapha Abdul-Hamid argued that in 2017 for instance, the budget for government machinery was Gh?1.5 billion under President Nana Addo Dankwa Akufo-Addo as against President John Mahama’s Gh?3 billion in 2016, with lesser staff numbers at the Presidency.

Presidency staff will balloon to 1,697 - Minority

Some Minority Members of Parliament in the National Democratic Congress [NDC] last week claimed that the number of persons said to be working at the Presidency has been understated.

“There are many more names we know that are not on the list. He has budgeted for 1,697 this year. So the 998 which we are all outraged about is not even the end. He hopes to get to 1697 in 2018,” Mr. Ablakwa said in a radio interview with Accra based Citi FM basing his figure on allocations in the 2018 budget.

But addressing a press briefing Sunday afternoon, the Minister of Information, Mr Kojo Oppong Nkrumah said the Minority and the peddlers of the allegation of an increase in the numbers were rather confusing the Office of Government Machinery (OGM) with that of the Office of the President (OOP).

“Specifically, Office of the President for the avoidance of doubt is expected to reduce by 69 by end of 2019,” he said.

He explained that the reduction was mostly as a result of retirements which are not being replaced.

“So contrary to the claim of an increase in numbers, there is rather a reduction in numbers by 69 specifically at Office of the President and net reduction of 83 in all at the entire Office of Government Machinery,” he said.

"Last week in Parliament and subsequently on several media platforms, the members of the Minority claimed that the government was planning to increase the number of staff at the Office of the President from 998 - 1614. They even further calculated and said an increase of 616 staffers."

"After several requests for them to offer proof to back this claim, they referred to the 2019 budget as the source of their claim and proceeded further to claim any such act will amount to a burden on the public purse," the Information Minister said.

"There are three things government wishes to share with you on this matter:

- Contrary to the claim, Staff numbers at Office of the President and Even the Office of Government machinery are rather going through a programmed reduction.

- Government pleads with the Media, that to preserve the sanctity of facts in public discourse, kindly subject people who make claims on facts, to strict empirical proof before giving them space to peddle such claims which can have significant effects.

Explaining the difference between Office of Government Machinery (OGM) and Office of the President "OOP", he said:

The Executive arm of government is organized into Ministries Departments and Agencies. The supervising outfit of the executive arm is referred to as Office of Government Machinery. It comprises 19 difference units one of which is the Office of the President.

So Indeed the established Posts at OGM has reduced between 2018 and 2019. It has reduced not increased.

The claim of an increase is because the minority is comparing Office of the President(998 in 2018) which was part of the 1697 ceiling, with the entire Office of Government Machinery ceiling for 2019 (1614).

The Information Minister therefore entreated the media, "to subject people who make claims about facts, to first substantiate them, before giving them media mileage to repeatedly peddle such unsubstantiated claims."

He added, "The basic rule of evidence is that he who alleges has an onus to prove. If we do not push people to first prove their claims and instead give them mileage to keep repeating their false claims, only to ask persons against who false claims are made, to rather come forward and prove their innocence, the media will soon be taken for a ride by people who feel all they have to do is make a claim because you will give them space.

"We want to encourage the media to subject such persons to proof or to check the facts themselves and not allow the public media space to be filled with untruths." 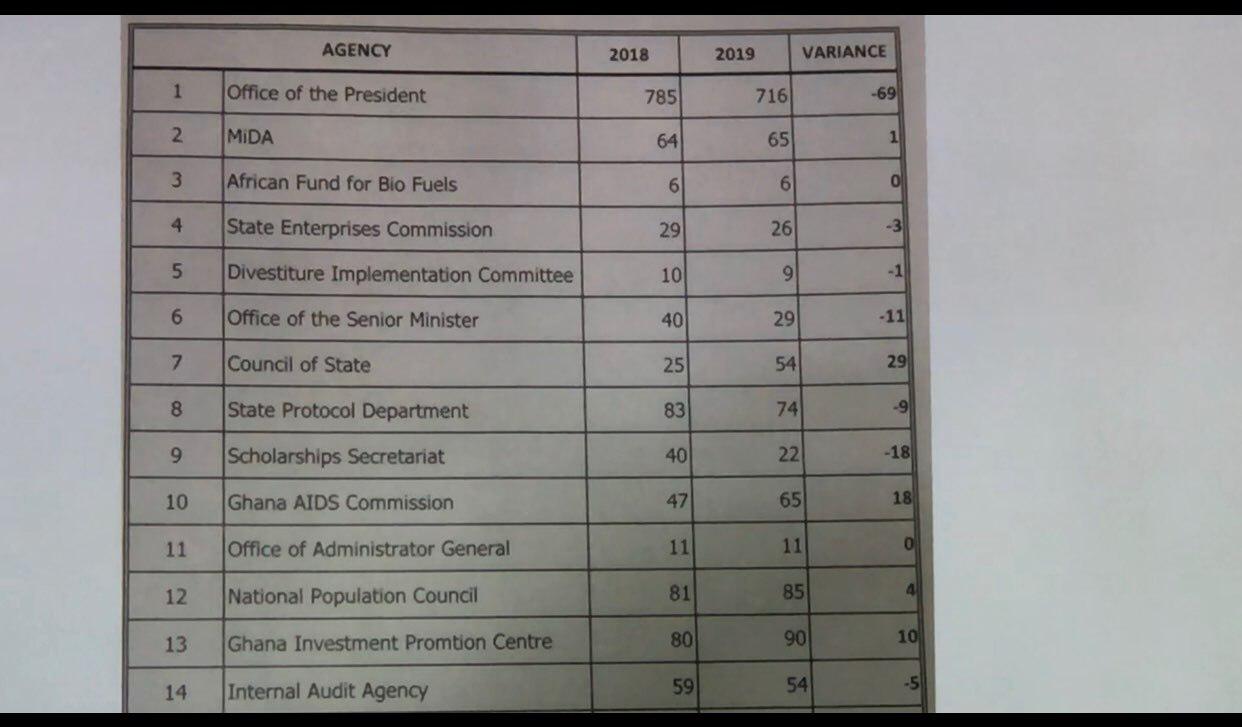 Budget should increase taxes on tobacco

Be discerning about what you consume-FDA