The military and the family of the late Major Maxwell Adam Mahama, who was killed by a mob while on anti-illegal mining assignment two years ago, yesterday defied a downpour to unveil a statue and a roundabout in his memory.

On the day the country was commemorating the second anniversary of his brutal death in the hands of a mob, dark clouds gave way to heavy rains that temporarily put the ceremony on hold.

After almost an hour and half, the ‘tears’ from heaven finally subsided for the solemn ceremony to continue.

It was attended by the top brass of the military, including the Chief of the Defence Staff, Lt Gen. Obed Akwa; the Minister of Defence, Mr Dominic Nitiwul, and the Minister of the Interior, Mr Ambrose Dery.

It was a day the late soldier’s mother and other relatives could not hold back their tears. Madam Veronica Bamford buried her face in her palms, under the shadows of the imposing effigy of her late son, and cried profusely.

She could not face the towering bronze statue of her son that stood at the Airport Hills (Kpeletso) Roundabout at La, a suburb of Accra.

“I can’t stand it; I can’t stand it. Adam, my son, I can’t stand it,” she said as family members consoled her.
With bloodshot eyes, she wailed uncontrollably, occasionally wiping her tears, while turning her back to the eight-foot structure.

The late Major’s wife, Barbara, remained emotionless, only staring blankly at the statute — the stark reminder of the man she lost to mob injustice on May 29, 2017.

She did not yield to the media’s bait for interviews.

The towering structure depicts the late Major Mahama, who died after a mob attack at Denkyira Obuasi in the Central Region. It has a triangular pedestal wall, with sculptures engraved on all three faces that recount the violence he suffered.

On each face, he is seen facing his assailants, with one hand close to his pistol and the other stopping the crowd from throwing missiles at him.

They also show a radiation of heat, indicating restraint from the use of force. 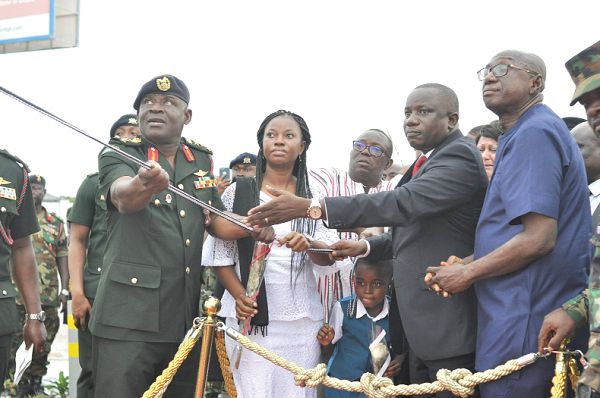 The Scale of Justice is also seen in the art at the convergence of two lines, urging a recourse to the rule of law as the best option to mob action.

The monument is in fulfilment of a promise President Nana Addo Dankwa Akufo-Addo made in June 2017, while visiting the family of the late Major Mahama, to the effect that he would set up a fund to cater for the wife and the children of the late soldier, honour him posthumously with the rank of a Major (he was a Captain when he died) and build a monument in his memory.

Speaking at the ceremony, Mr Nitiwul said the monument should be a perpetual reminder to all that instance injustice should be a thing of the past.

“As stated by the President when he visited the family, the statue we see today should remind all of us that the ultimate sacrifice that this young man made to the people of Ghana should be the last for all of us.

It should be a reminder to us that in the laws of Ghana, you are presumed innocent until proven guilty,” he said.

“Taking the law into our hands to beat to death, stone to death, burn to death, club to death or strangle to death by any group of individuals should be a thing of the past,” he added.

The fallen soldier’s father, Captain Adam Mahama (retd), commended the government for living up to its promise.

“So far, the government has done very well. They made promises and they have fulfilled all. Today is the realisation of the last one. We are happy about it,” he said.

“It shows Ghanaians have swept the whole case under the carpet. I know everybody in the country heard about it and yet some few months after that people still chase, molest and kill suspects. It is still happening; it has not been educative enough,” he said.