Schoolchildren in public schools in the East Mamprusi Municipality in the North East Region are forced to learn under harsh conditions.

The municipality has a total of 100 primary and junior high schools (JHSs) and all are faced with challenges ranging from lack of furniture to poor infrastructure.

A visit by the Daily Graphic to 10 basic schools revealed that in spite of the government’s resolve to ensure that all children of school age were enrolled, most schoolchildren were studying under bad conditions.

Some pupils lie prostrate to write while others are combined in the few available classrooms.

All the basic schools visited lacked furniture and were in a deplorable state, affecting teaching and learning.

In some schools, pupils from Kindergarten (KG) to Primary Three had no desks to sit on while others shared the few available desks.

Moreover, authorities of most of the schools had combined both upper and lower primary pupils in the existing dilapidated classrooms.

Some schoolchildren also study under trees due to the lack of classrooms, exposing them to environmental hazards.

Aside from the lack of furniture and infrastructure, checks by the Daily Graphic revealed that the Sakogu E/A Primary School, for instance, since its establishment some years ago had not been provided with teaching and learning materials, compelling teachers to improvise for academic work.

The school also had no tables and chairs for the teachers.

According to authorities of the various schools, the situation had resulted in a number of pupils dropping out of school.

“Because of the bad conditions, some pupils have dropped out of school and are now helping their parents on their farms, other parents who are able to afford have also withdrawn their wards to better endowed private schools where the environment is conducive for learning,” a teacher, who wishes to remain anonymous, told the Daily Graphic.

Another teacher said: “I have complained and took pictures of the pupils lying on the bare floor and sent to the District Chief Executive but nothing has been done about it”.

The Municipal Director of the Ghana Education Service (GES), Mrs Hawa Yussif, in an interview said the situation had affected academic performance of the pupils enrolment over the years.

“It is true that there are infrastructure and furniture challenges in the municipality, the GES does not provide furniture and infrastructure so I have written to the assembly on several occasions but nothing has been done about it, almost all the schools in the area are facing same challenges,” she noted.

“The Complementary Basic Education (CBE) programme will prepare the out-of-school children but transitioning them into the formal education system is always a big challenge,” she added. 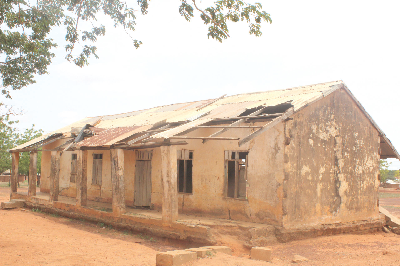 Mrs Yusif disclosed that due to the bad conditions in the various schools, a number of teachers were seeking release from the area which had become a major worry to the directorate.

Available data indicated that there were 671 trained teachers in the municipality, however, a large number of them have sought transfer to leave the area.

“About 25 teachers who were posted to the area in 2015/2016 have currently applied for release,” the Municipal Human Resources Director, Mr Francis Adongo added.

When contacted, the Municipal Chief Executive, Mr Abdul-Nasir Danladi, said the assembly had received reports on the bad state of the schools and was making frantic efforts to address it, adding that “the issue of lack of furniture is not a small problem but we are working on it. Last year we distributed a number of furniture to the schools but that was not enough”.

He appealed to non-governmental organisations (NGOs) and benevolent organisations to assist the assembly in its quest to provide furniture to the schools to ensure quality education.

COVID19: Nurses to get free transportation

COVID Outbreak: How to clean surfaces

Fact Check: COVID-19 is NOT airborne

Govt to undertake testing for COVID19