Former US Vice-President Joe Biden has declared a presidential bid, putting an end to months of speculation.

In a video announcement, Mr Biden warned that the "core values of the nation... our very democracy, everything that has made America America, is at stake".

The 76-year-old enters a crowded race for the 2020 Democratic nomination.

He is up against 19 other hopefuls, including Senators Elizabeth Warren, Kamala Harris, and Bernie Sanders.

In his announcement, Mr Biden recalled President Donald Trump's much-criticised response to the deadly Charlottesville white nationalist riots of 2017, saying the US was in a "battle for the soul of this nation".

"I believe history will look back on four years of this president and all he embraces as an aberrant moment in time," he said. "But if we give Donald Trump eight years in the White House, he will forever and fundamentally alter the character of this nation, who we are, and I cannot stand by and watch that happen."

Mr Biden is the most experienced of the Democratic candidates. A six-term senator, he served as President Barack Obama's deputy for two terms and ran twice unsuccessfully for president - in 1988 and 2008.

He was tipped to run again in 2016, but ruled himself out after the death of his 46-year-old son, Beau Biden, from a brain tumour.

Since his stint as vice-president, Mr Biden has enjoyed relative popularity among Democrats. On some issues, such as same-sex marriage, he was ahead of Mr Obama.

His popularity is reflected in opinion polls - he has consistently led every national poll of the Democratic primary tracked by the website RealClearPolitics. The sheer weight of his experience sets him apart from many of the younger 2020 Democratic hopefuls, and widespread national popularity and name recognition make him an immediate front-runner.

Mr Biden is also betting on having the strongest appeal of the Democratic candidates across America's Midwest, where many low-income voters have abandoned the party in recent years in favour of Mr Trump.

But the former vice-president also carries political baggage that the liberal wing of his party sees as problematic - including support for the Iraq war, opposition to efforts to improve racial integration, and controversy over his 1991 handling of sexual harassment allegations against Supreme Court nominee Clarence Thomas.

More recently, his campaign stumbled before it began, when he was forced to address claims he had inappropriately invaded the personal space of women. He apologised, saying: "The boundaries of protecting personal space have been reset," he said. "I understand it and I'll be much more mindful."

There is also the question of Mr Biden's age. On inauguration day he would be 78, making him the oldest sitting president in history, at a time when many Democratic voters are looking to a younger generation to galvanise the party.

Joe Biden enters the Democratic presidential contest as a front-runner, if not the front-runner. He has near universal name recognition, high approval ratings within the party and among political independents, a close connection to the halcyon days (at least, for Democrats) of the Obama presidency, and the potential to raise vast amounts of campaign money through traditional Democratic donor networks.

Of course, so did Hillary Clinton in 2015 - and we all know how that turned out.

Mrs Clinton's key weakness in that presidential race was her lengthy time in the public eye, leaving a long record for her opponents to pick apart, and binding her to a status quo establishment many Americans had come to distrust.

Mr Biden shares those challenges in spades, and he faces a much more diverse and talented primary field than Mrs Clinton did.

His position against school bussing to end segregation in the 1970s, his chairmanship of the Clarence Thomas Supreme Court confirmation hearings in 1991, and his support for the 2003 Iraq War and stringent anti-crime and bankruptcy bills put him out of step with today's Democratic Party.

Then there's his advanced age, propensity for verbal stumbles, allegations of inappropriate physical contact and status as a two-time loser in past White House bids.

The former vice-president has a lot going for him. He also has a lot going against him. The durability of his campaign is one of the big questions hovering over the early days of the 2020 Democratic race. Those questions will soon be answered.

Who is Joe Biden?

Joseph Robinette Biden Jr was born on 20 November 1942 in Scranton, Pennsylvania, one of four children in an Irish-Catholic family.

In 1972, Mr Biden was elected to the US Senate at the age of 29, and took office a few weeks later when he turned 30 - the minimum age to enter the Senate.

Just before he took office, he was devastated by tragedy: his wife Neilia and infant daughter Naomi were killed in a car crash. 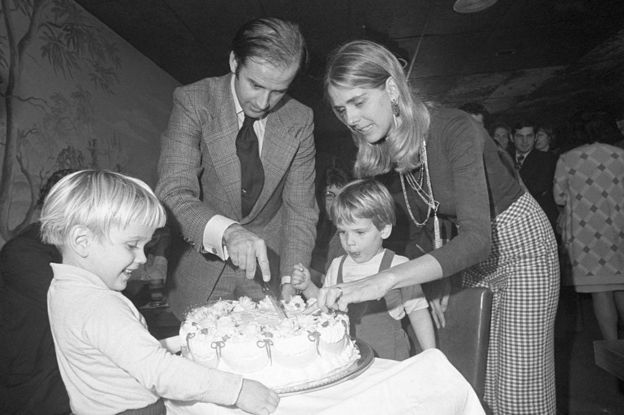 Mr Biden first ran for the presidency in the 1988 election, but he withdrew after admitting that he had plagiarised a speech by Neil Kinnock, the leader of the Labour Party in the UK at the time.

After that bid he spent time rising through the Senate ranks, eventually becoming chairman of the judiciary and foreign relations committees.

In 2008 he ran for president again, but failed to gain the political traction he needed and dropped out again. Instead, he joined the Obama ticket as candidate for vice-president.