Protests continued into Tuesday after a violent day on Monday

Hong Kong's rule of law has been pushed to the "brink of total collapse" after more than five months of protests, police have warned.

The warning came a day after the territory saw a marked escalation in violence, with police shooting one activist in the torso.

A pro-Beijing supporter was later set on fire by anti-government protesters.

Protesters continued to clash with police on Tuesday in the central business district and at universities.

According to news agency AFP, hundreds of masked protesters were seen throwing bricks and other objects, while police used tear gas to force them back.

But there were also thousands of office workers out on the streets, peacefully chanting: "Fight for freedom, stand with Hong Kong!"

The protests started in June against a now-withdrawn plan to allow extradition to mainland China, but have since morphed into wider demonstrations, with activists demanding greater democracy and police accountability in Hong Kong.

On Tuesday afternoon, police spokesman Kong Wing-cheung hit out at the protesters, saying they had "countless examples of rioters using random and indiscriminate violence against innocent" people.

"Hong Kong's rule of law has been pushed to the brink of total collapse as masked rioters recklessly escalate their violence under the hope that they can get away with it," he told reporters, adding that Monday's attack on the pro-Beijing supporter was being investigated as attempted murder. 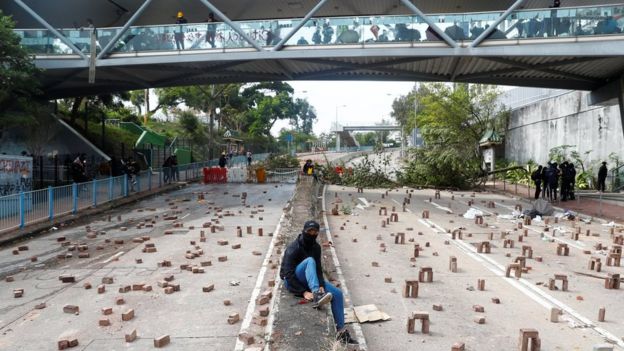 Protesters set up roadblocks near the City University of Hong Kong

Speaking at the same conference, Supt Li Kwai-wah defended the officer's decision to shoot the protester on Monday.

"We found out that our colleague did not only face threat from one person, instead it was a group of people with an organised plan attempting to steal the gun," he said.

"In a situation like this, we believe our police are reacting according to the guideline, to protect themselves as well as the people around them."

Both the protester and the pro-Beijing supporter remain in hospital, with the latter in a critical condition.

Clashes erupted at the Chinese University of Hong Kong, with police firing tear gas to disperse students, while at City University there was standoff between students and riot police which continued throughout the day.

Police continued to use tear gas to try to disperse the protesters. 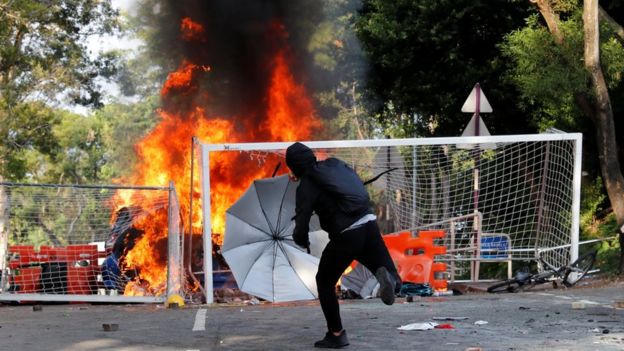 Students built roadblocks on streets in and around City University campus to stop police from entering. At one stage, a van used as part of a street barricade was set on fire.

Students at Hong Kong Polytechnic also tried to disrupt traffic near their campus.

In the morning, suspended railway services and road closures had already led to long traffic jams in the early rush hour.

At noon, protesters moved into the city's central business district for a flash mob protest.

Dozens of local and international schools across Hong Kong said they would close on Tuesday with some telling parents on text messages it was due to safety concerns.

Speaking on Tuesday morning, Chief Executive Carrie Lam said despite the unrest, there would be no blanket suspension of all schools.

What happened on Monday?

Protesters had called for a day of city-wide disruption. Early in the day a protester was shot at close range by a police office near a roadblock set up by activists.

Elsewhere a man was doused with flammable liquid and set on fire by anti-government protesters after arguing with them.

More than 260 people were arrested on Monday, according to police, bringing the number to more than 3,000 since the protests began in June.

Ms Lam, speaking at a news conference in the evening, called the demonstrators enemies of the people.

The US meanwhile expressed "grave concern" over the situation in Hong Kong, condemning "violence on all sides" and calling for restraint.

Why are there protests in Hong Kong?

Hong Kong is part of China but as a former British colony it has some autonomy and people have more rights.

The protests started in June against plans to allow extradition to the mainland - which many feared would undermine the city's freedoms.

The bill was withdrawn in September but demonstrations continued and now call for full democracy and an inquiry into police behaviour.

Clashes between police and activists have become increasingly violent and in October the city banned all face masks.

Perception of hardships not creation of NDC

Ghanaians not paying taxes because of Pres.

Giving birth under the Taliban

African presidents in US for UN assembly

The man who hopes to topple Trudeau