Her killing in August sparked large protests over the high levels of violence against women in the country.

There were brief cheers in the court on Friday as the sentence was handed down.

"This judgment won't in any manner replace Uyinene but we do appreciate it," her uncle said, IOL reports.

In South Africa some 2,700 women were murdered by men last year.

That is five times higher than the global average. In addition, at least 100 rapes were reported daily.

In September, at an emergency sitting of parliament on this issue, President Cyril Ramaphosa said urgent action was needed and likened the figures for violence against women and children to those of a country at war.

Shortly after her murder, reports emerged that Ms Mrwetyana had been lured into the mail room of a post office in Cape Town.

She was then raped twice and bludgeoned to death, South African news site News24 reports. 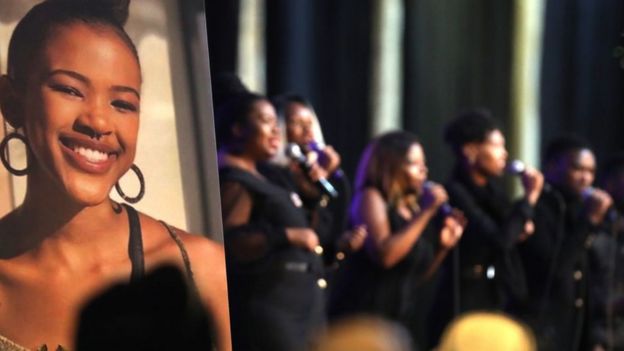 At the student's funeral the family apologised for not protecting her

Botha hid her body in the post office's safe before taking it to another place and setting fire to it, News24 adds quoting the prosecution's summary.

The first-year film and media studies student had been missing for a week before her body was found dumped in Khayelitsha township.

The killing led to large protests, including an attempt to storm a conference centre in Cape Town where a meeting of the World Economic Forum was taking place.

In September, the Duchess of Sussex, Meghan Markle, tied a ribbon at a memorial on her visit to Cape Town.

She personally passed on her condolences to the victim's mother. Meghan made the visit to "show solidarity" with protesters against gender-based violence, a post on her official Instagram account said.

'She was a fighter'

The family has announced a scholarship in Ms Mrwetyana's name at the University of Cape Town where she was a student.

"Though it may be cold comfort to you today, it is not without significance that she was a fighter and clearly had a fighting spirit for her life."

South Africa's Justice Minister Ronald Lamola said the sentence handed to Ms Mrwetyana's killer sends a strong message that gender-based violence and femicide "has no place in our society".

This high-profile case comes amid a recent spike in violence against women in South Africa - over the past year sexual assault increased by 9.6% and rape by 3.9%.

Murders and sexual offences since 2010

For many it was a sombre reminder of how dangerous everyday life had become for many South African women and that it seemed nowhere was safe - not even a post office, says the BBC's Pumza Fihlani in Johannesburg.

This ruling may go some way in restoring people's faith in the justice system, our correspondent adds.

In a statement on the release of the latest figures in September, the Minister of Police Bheki Cele, said reversing the rising murder trend of the last six years was a "mammoth task, but is doable".

No project abandoned in Biakoye - DCE

Imam who married a man charged

'Don't influence the youth with money'

US congresswoman reveals she has alopecia

Sudan looks to pyramids to attract tourism
Next Item