Coronavirus: Taobao warns firms not to profit from outbreak

Chinese online giant Taobao has warned sellers using its platform not to profit from the deadly coronavirus outbreak by raising prices.

Fears over the spread of the virus in China have triggered a surge in sales of protective gear in Asia.

Pharmacies have seen a rush for surgical masks, while rubber glove makers are braced for a jump in demand.

At least 17 people have now died, with more than 500 confirmed cases across China, and as far afield as the US.

Over the two days of 20 and 21 January more than 80 million masks were sold on Taobao, which is owned by Alibaba and is one of the largest online retailers in the world .

However, media reports suggested these included profiteers looking to quickly resell the masks at a higher price.

This prompted the online message from Taobao warning sellers they were ''not allowed to increase prices''. In November, a pack of 20 3M masks sold for 178 yuan (£20), but on Tuesday sellers were charging up to 1,100 yuan for the same item, according to a report in Singapore's Straits Times newspaper.

Taobao said it would also offer ''special subsidies'' to make sure masks were ''cost-effective'' for consumers. On top of this, it will also continue delivery services during the Chinese New Year celebrations

Joleen Siew at Glovida, an e-commerce site based in Singapore selling health products, said it had seen a "significant spike in demand for masks compared to normal".

"We've also seen more demand for immunity products like vitamins and supplements as parents want to protect their kids. Singapore likes to be pre-emptive about these things.''

Denis Low, president of the Malaysian Rubber Glove Manufacturers Association which represents 56 members told the BBC: "I have spoken to the members and we are all geared up if demand shoots through the roof as expected. We will ramp up capacity and make some tweaks to productivity.''

Malaysia produces around two-thirds of the world's rubber gloves, predicted to be more than 150 billion pairs this year.

During the H1N1 flu pandemic in 2009 and 2010, Malaysian rubber glove makers saw a surge in orders of about 10%-15%. Mr Low, who works for glove maker Supermax, said the increase could be higher this time if the coronavirus continues to spread.

''We are very worried about this virus and will do all we can to make sure we meet the demand. But we will not profiteer from this calamity by putting up prices,'' he added. 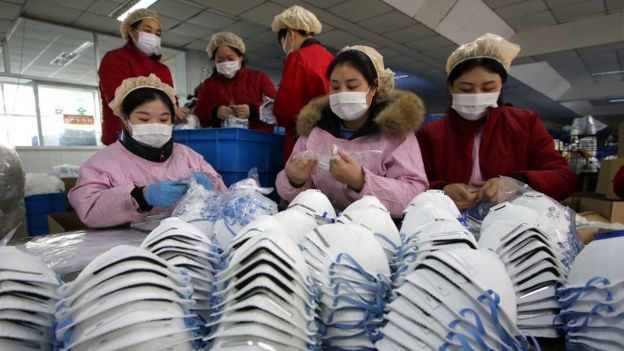 Demand for face masks has soared

Major airlines have said they will supply protective gear to cabin crew and passengers who request them.

Hong Kong carrier Cathay Pacific was the first airline to announce it will allow cabin crew to wear surgical masks while operating mainland China flights due to infection concerns.

Singapore Airlines also said it is making surgical masks available to crew, and other carriers operating in the region are expected to follow suit.

A Cathay Pacific spokeswoman said: ''We are monitoring the situation closely and will continue to co-ordinate with the health authorities in Hong Kong and in all the ports to which we operate flights'

Founder Pony Ma Huateng will not hand out traditional red packets to employees to celebrate the Lunar New Year for fear of spreading the virus.

This is the first time in almost two decades Shenzhen-based Tencent has cancelled this traditional handout to staff.

Use virtual public space for campaign

EC concerned about safety of applicants

Probe of Saudi prince
Next Item