US Open champion Naomi Osaka came from behind to beat Latvia's Anastasija Sevastova and reach the Australian Open quarter-finals.

The Japanese fourth seed won 4-6 6-3 6-4 to set up a meeting with sixth seed Elina Svitolina.

Both Svitolina and Osaka have been taken to three sets in their past two matches this tournament.

Svitolina broke twice to take the first set but Keys won five games in a row and hit 16 winners as she went on to dominate the second.

The Ukrainian then held off five break points in a 16-minute game in the third set on her way to victory.

Osaka makes it hard for herself (again) 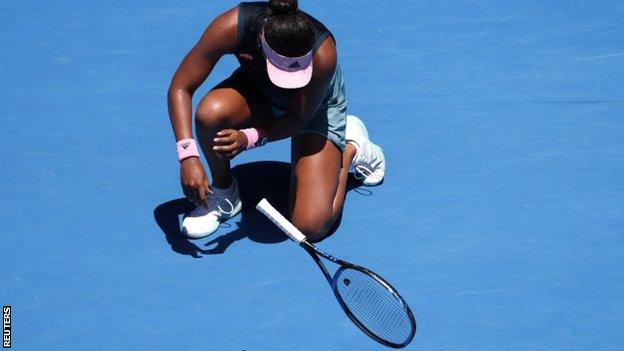 Naomi Osaka took out her frustrations on her racquet

Osaka had made a confident start, holding her opening serve to love, but then dropped her next service game to allow Sevastova to take charge of the first set.

For the second match in a row, the world number four faced the prospect of a three-set match if she wanted to progress.

She fended off a break point in the third game of the second before getting the decisive break in the sixth with a powerful forehand winner and later serving out the set.

Osaka continued to put pressure on the Latvian's serve, securing an early break, but then succumbed on a sixth break point to drop serve in a lengthy game.

She took out her frustrations on her racquet but recovered to break back immediately and eventually sealed victory on her second match point with a forehand winner.

"I didn't give up, she was playing really well and I wasn't really sure what to do at a certain point but I just tried to stick in there," said Osaka, who had been a set and a break down in her third-round match against Taiwanese Hsieh Su-wei.

"I was thinking I've been in this position before - actually it was a little bit worse last time." 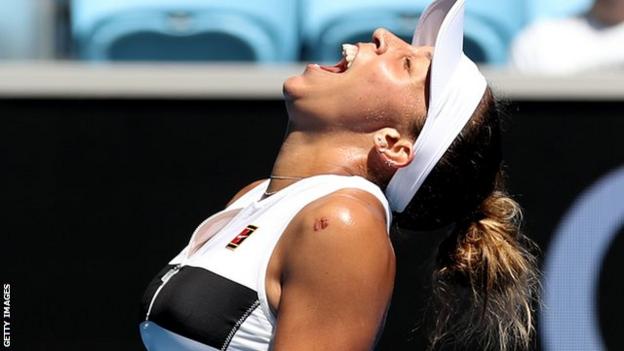 Keys had five break points in the third set but failed to convert any, while Svitolina had two and broke twice

It looked like it would be an easy victory for Svitolina when nine unforced errors from an out-of-sorts Keys helped the Ukrainian storm to a comfortable first-set lead.

The only thing troubling Svitolina was a blister on her toe, which needed attention during a medical timeout before her final service game.

But despite losing just seven points on her serve in the opening set, Svitolina struggled to match Keys' powerful ground strokes in the second and was immediately broken.

A revived Keys flipped the match on its head, winning 85% of her first serve points and hitting 16 winners to Svitolina's four in the second set.

It looked like the momentum would follow Keys into the deciding set and at 1-1 Svitolina had to hold off a mighty challenge from the American, who failed to take any of her five break points in a game that lasted 16 minutes and 20 seconds.

And that lack of ruthlessness proved costly for 17th seed Keys as Svitolina responded with back-to-back breaks to storm to victory and book her place in the quarter-finals for the second year running.

"I was happy to handle that pressure at 1-1 in the third set," Svitolina said. "It was very hard because the sun was burning my eyes, so I was very happy that I could win that game.

"I was playing good tennis today but Madison was playing great too in the second set, so I had to rise and put my level up. I am going to enjoy this first because I have to keep positive for the next round.

"It is always exciting. I love to come here and it is always a happy place." 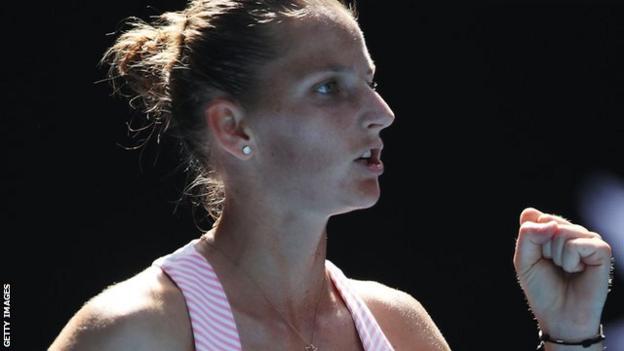 It was an extremely comfortable afternoon for Pliskova who made two-time Grand Slam champion Muguruza look fairly average on Margaret Court.

The Czech was broken early in the opener but broke back twice to take the first set in 37 minutes, then took the advantage again immediately at the start of the second.

It was a ruthless performance as Pliskova clocked up 23 winners in total, won 82% of her first serve points and only produced three unforced errors.

In comparison, former Wimbledon champion Muguruza looked out of sorts and out of ideas as she made 20 unforced errors and could only win 29% of the points on her second serve.

The match was over in an hour but Pliskova will face much tougher competition in the next round when she comes up against the unquestionable talents of Halep or Williams.

Salisbury sees off Evans in doubles

Zverev loses to Milos Raonic in fourth round
Previous Item
NEXT