Nick Kyrgios is ranked 36th in the world

He's never been one to hold back and now Nick Kyrgios has unleashed a volley of criticism against some of his fellow professionals in an unfiltered interview.

In the 50-minute interview, Kyrgios called Roger Federer the "greatest of all time" but had less warm words for the Swiss' great rival Nadal.

"When he wins it's fine, he won't say anything bad, he'll credit the opponent - 'he competed well today, he's a great player' - but then as soon as I beat him, it's just like 'he has no respect for me, my fans and no respect to the game'. I'm like 'what are you talking about? I literally played this way that I beat you the other previous times and nothing changed'.

"It's not a good look. And then Uncle Toni [Nadal's coach] came out saying 'he lacks education'. I'm like 'I did 12 years at school, you idiot. I'm very educated. I understand that you're upset I beat your family again'."

The contents of the podcast interview became public on Thursday, the same day Kyrgios was defaulted from the Italian Open after throwing a chair on to the court and walking off.

He was docked a game by the umpire for unsportsmanlike conduct, and as Kyrgios packed his bags and left, the umpire awarded the match to Norway's Casper Ruud early in the deciding set. 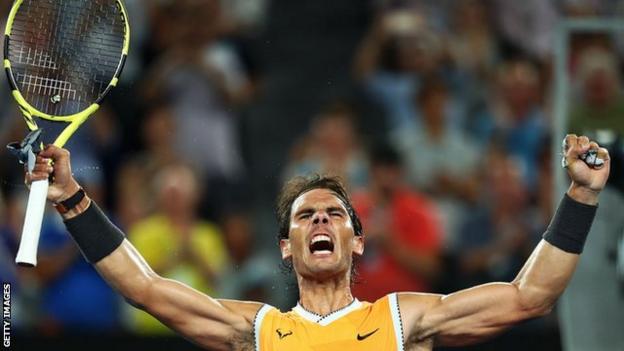 In an interview earlier this year, Nadal said Kyrgios "lacks respect for the public, the rival and himself"

"I just feel like he has a sick obsession with wanting to be liked. He just wants to be like Roger.

"For me personally, I don't care right now, I've come this far, I feel like he just wants to be liked so much that I just can't stand him.

"But he is a champion of the sport, one of the greatest you'll see.

"Djokjovic just rubs me the wrong way, always says what feels like he needs to say and never speaks his opinion."

"With Murray, he would have ticked all the boxes, it's just sad, it sucks not seeing him around here, in the locker room he was the best, always having bants and everybody was super friendly with him but he also had an opinion of some people too and he wasn't afraid to say things as well which I liked. He was just a lot of fun and I think the sport lost a good one there." "Verdasco drives me nuts, man. It gets me so vexed, I'm like angry now that I just hear that name. He's the most arrogant person ever. He doesn't say hello, he thinks he's so good, he thinks he's God's gift. Dude, your backhand's pretty average and let's be honest, you hit a ball over a net.

"Guys like that, they drive me insane. There's no humility there, there's no perspective. It's just like 'I'm here, I'm so cool, I'm unbelievable because I hit a ball over the net. Do this for me, do this for me, I won't say hello to you, I'm too important'.

"Guys like that. See how angry I'm getting? It kills me."

Nick forfeits after storming off court
Previous Item
NEXT