Three-time Formula 1 world champion Niki Lauda produced the "most courageous act of any sportsman" in returning to racing so soon after a horrific crash, says former team-mate John Watson.

He almost died following a crash in the 1976 German Grand Prix at the Nurburgring.

World champion Lewis Hamilton said he was "struggling to believe you are gone". The Briton added on Twitter: "I will miss our conversations, our laughs, the big hugs after winning races together. God rest your soul.

"Thank you for being a bright light in my life. I'll always be here for your family should they ever need me. Love you man."

Watson was a team-mate of Lauda at Brabham and McLaren in the 1970s and 1980s and was one of the first people to attend to him after the crash.

"I came around shortly after the accident and the other drivers that were there managed to get him out of the cockpit and walked him away," Watson told the BBC.

"We lay him down and I put his head in my lap and he was able to communicate.

"Nobody realised the actual damage to Niki. The real danger he was in was not from the superficial injuries that we could see but from the deeper injury which was that to his lung.

"He'd suffered inhalation of toxic fumes from the burning fibreglass and we didn't appreciate the severity of the injury that he'd suffered.

"It was only after two or three days that the story came out that it was the lung damage that was the injury putting his life in danger.

"Racing 40 days after that accident was the most courageous act of any sportsman I've ever seen in my life."

Watson, 73, added: "What was really more remarkable was the speed of his recovery and what he was able to achieve.

"His courage, his commitment, focus, determination and bloody-mindedness. All the naysayers were saying that 'Lauda is finished' but his health and condition at Monza was just remarkable.

"He was winning the world title in 1976 by a country mile up to that accident and it was this year where there was this battle between Niki and James Hunt, so there was a lot of motivation to get back into the car."

"Recovering from that accident, he came to Monza [for the Italian Grand Prix], which I was doing commentary for. He shouldn't have been there but wanted to get back to racing.

"I will never forget him putting his helmet on and he was suffering so much pain. When he came out from driving at the end I was there and the blood was running down out of his helmet.

"It's very sad news. I've known Niki for a long time and he was just entering grand prix racing when I was retiring. We had a season together. He always had great integrity and was one the smoothest, best drivers I've ever seen."

'One of the greatest legends'

As non-executive chairman of Mercedes, Lauda helped them win both the drivers' and constructors' title in each of the past five seasons.

Team principal Toto Wolff said: "First of all, on behalf of the team and all at Mercedes, I wish to send our deepest condolences to Birgit, Niki's children, his family and close friends.

"Niki will always remain one of the greatest legends of our sport - he combined heroism, humanity and honesty inside and outside the cockpit.

"His passing leaves a void in Formula 1. We haven't just lost a hero who staged the most remarkable comeback ever seen, but also a man who brought precious clarity and candour to modern Formula 1. He will be greatly missed as our voice of common sense.

"Our Mercedes team has also lost a guiding light.

"As a team-mate over the past six and a half years, Niki was always brutally honest - and utterly loyal. It was a privilege to count him among our team and moving to witness just how much it meant to him to be part of the team's success." 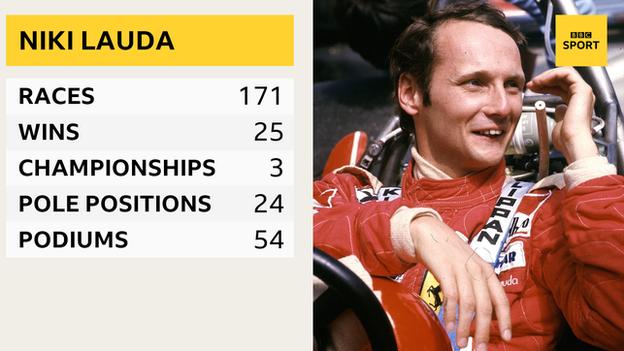 Nico Rosberg, who won the world title in 2016 with Mercedes, tweeted: "Dear Niki. Thank you for everything that you did for me. I learned so much from you.

"Your passion, your fighting spirit, to never give up, you belief that you always meet twice in life, and even your patience with us youngsters.

"Myself and all of your 100 million fans around the world whom you also so strongly inspired to never give up in the hardest of times are thinking of you and your family and wish that you rest in peace." 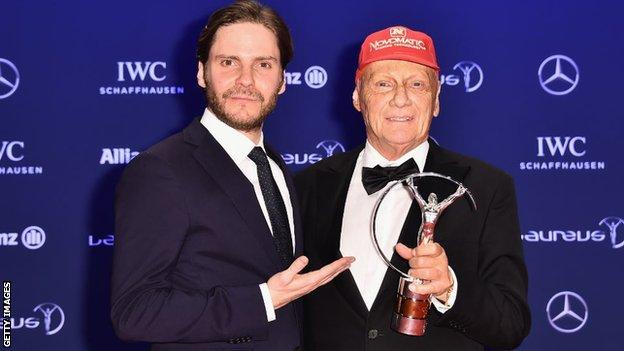 Actor Daniel Bruhl played the role of Niki Lauda in the film 'Rush', which focused on the 1976 Formula 1 title battle between Lauda and Briton James Hunt.

On Tuesday, Bruhl paid tribute to Lauda and wrote on Instagram: "The bravest man, I've ever met, not only because he was an F1 world champion in the crazy '70s and had the most incredible comeback in sport's history, but also because of how he treated people.

"Always honest, straight forward, blunt. Niki told you the truth in your face, no matter how uncomfortable. He was totally unpretentious and incredibly funny. I learned a lot from him and deeply admired him.

"I know how much you enjoyed flying. Race the sky in peace immortal champ, we'll miss you."

Ferrari: "Everyone at Ferrari is deeply saddened at the news of the death of our dear friend Niki Lauda.

"He won two of his three world championships with us and will always be in our hearts and in those of all Ferrari fans.

"Our sincere condolences go to all his family and friends."

Former world champion Damon Hill: "He was a remarkable individual in every way. I was certainly one person that looked at Niki and thought 'I'll never be half the man he was.

"His career was stylised and characterised by his intelligent approach. When he came up against Alain Prost, he knew he couldn't beat him on speed so he beat him on tactics.

"He was thoughtful, intelligent, pragmatic and just got the job done."

Red Bull driver Max Verstappen: "Shocked by the loss of Niki Lauda. He was a true legend in our sport and someone I had great respect for. May he rest in peace."

Red Bull team principal Christian Horner: "Rest in peace to an F1 legend that I was lucky enough to call a friend. A very sad day for the entire motorsport community.

"All at Red Bull Racing share their thoughts with Niki's family and friends at this time. Godspeed Niki."

McLaren: "Niki will forever be in our hearts and enshrined in our history."

Former driver Johnny Herbert: "A real loss to sport and a big hole in our hearts. Courageous, chatty, and extremely funny.

"I am going to miss you being around the F1 paddock but the legend of Niki Lauda will live on, because you were a very, very special man. Thanks for all the memories." 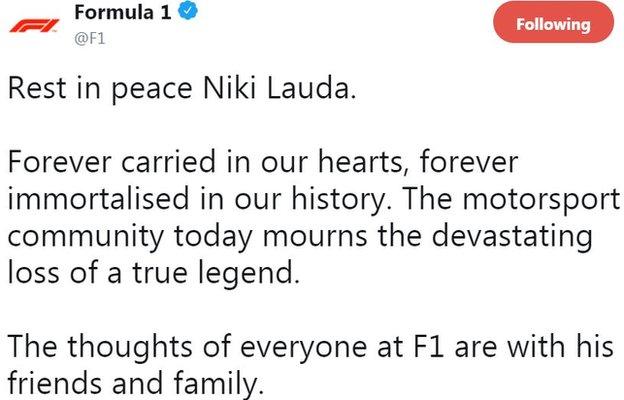