Lee is facing 10 weeks out after twisting his knee early in Sunday's league defeat by Celtic, with the teams meeting again at the weekend.

Haring has not played since last month's semi-final but insists he has recovered from a groin complaint.

"I took some days off after getting an injection then started with some work in the gym. I started some light running abut 10 days ago and have been doing a little bit more every day.

"It's been a stressful few weeks worrying whether I'd make the final."

On Lee's injury, manager Craig Levein told the club website: "It's hugely disappointing news for us, and especially for Olly.

"Missing out on a cup final is hard to take so Olly now has to focus on his rehab and target making a comeback for the beginning of the next league campaign."

Like Lee, Haring joined the Tynecastle club last summer and has quickly become a fans' favourite.

"This will be one of the biggest games of my career - and I've had a lot of those this year," said the Austrian.

"It's been the best season of my life so far, my best experiences in football have come this season.

"It's the last day of the season and a cup final. It's about taking everything you've got in your body and putting it all into trying to win a trophy."

Arnaud Djoum, who has been sidelined by an Achilles problem will be monitored, while striker Uche Ikpeazu is making good progress and Harry Cochrane is expected to recover from illness. 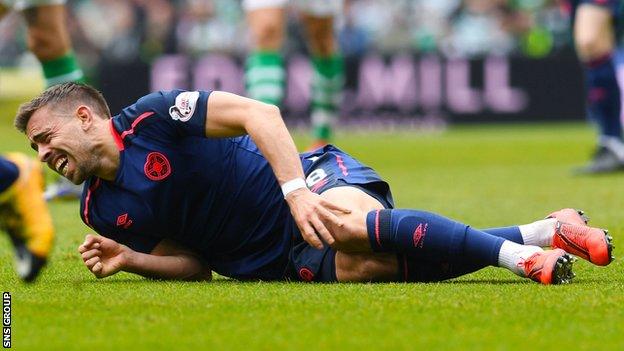 McNulty one of 12 Hibs departures
Next Item