Scottish Cup: The inside story of Hearts' 2012 win over Hibs

Throwing up in the Hampden toilets. Finding out the opposition team days before the game. Celebrating with a five-day bender, while being treated like Take That.

Hearts' 2012 Scottish Cup final meeting with Hibernian was certainly an eventful occasion, but they could not have wished for the game itself to go any better, running out 5-1 winners at Hampden Park to seal their eighth triumph in the competition.

Goals from Ryan McGowan, Darren Barr, Danny Grainger and a brace from Rudi Skacel gave the Tynecastle faithful a day that they will never forget - a crushing win over their city rivals in a major cup final.

As Craig Levein and his side prepare to face Celtic in this year's showpiece, BBC Sport Scotland caught up with some of the key men from that unforgettable day in 2012.

'I wasn't sat in a hedge with binoculars' - insider information

Hearts went into the game as clear favourites, having beaten Hibs comfortably in all three league games that season as Paulo Sergio's side finished fifth in the Scottish Premiership. Hibs, meanwhile, had a campaign to forget as they finished 11th. But the Tynecastle side were leaving nothing to chance.

Hearts assistant Gary Locke: "It wasn't quite spying - before any Edinburgh derby you're always trying to find out bits and bobs. I heard from somebody I knew that Hibs were working a certain formation and what the team was going to be. Sometimes it can be a nonsense, but luckily for us the information that we got was pretty much spot on and what we worked on in training paid off. I certainly wasn't sat in a hedge with binoculars watching their training, that's for sure."

Defender Ryan McGowan: "We were quietly confident but they had a few match-winners such as Leigh Griffiths and Garry O'Connor - players who on their day can score goals out of nothing - so we were wary of one of them scoring an absolute screamer. That was in the back of our minds."

'He was sat there spewing' - the nerves

An Edinburgh derby win comes with bragging rights. But this was not just any Edinburgh derby. It was the first time the two clubs had met in a Scottish Cup final since 1896. For some of the players, it all got a bit too much.

Defender Danny Grainger: "I didn't feel too bad. I think it was more the local lads, I know Ian Black was really nervous. He was in the toilet being sick about 20 minutes before kick-off. I remember walking into the toilets and he was sat there spewing, physically sick with nerves." 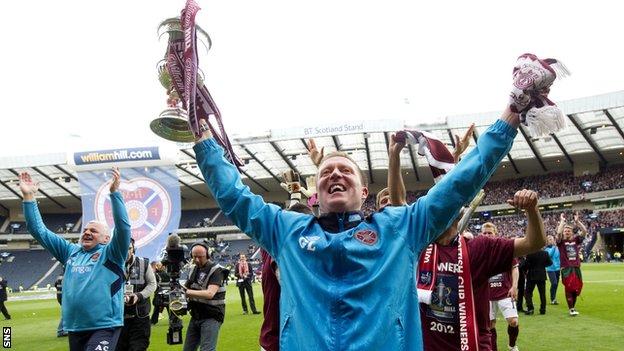 Locke: "There were a lot of nerves before the game because of the magnitude of the game. In a cup final, as much as you're confident, there's another side to it. You're thinking 'if we get beat today we're never going to hear the end of it'. I'm a big Hearts fan - I knew that if there's one game we cannot get beat, it's this one.

"Paulo Sergio made us train at Tynecastle every day that week. I thought it may have been a good idea to get away for a couple of days but Paulo wanted the players to sleep in their own beds and stay with their families. We needed them as relaxed as possible."

Midfielder Ian Black: "There was a bit of nerves, but as soon as the whistle went to start the game, all the nerves drained out and we got the ball moving."

'It could have been six, seven or eight' - the game

Goals from Barr and Skacel put Hearts in a commanding position, but James McPake pulled one back for Hibs before the break. After half-time, Pa Kujabi gave away a penalty and was sent off before Grainger scored from the spot. McGowan's header and Skacel's second then sealed the win against the dishevelled 10 men.

"Scoring was fantastic. My little boy was wasn't very old, my family and friends were right in line with the penalty spot, too. I lost my granddad prior to the semi-final. It was an emotional time for me, but that day was really amazing."

Grainger and his son Oliver on the pitch after the game

McGowan: "My goal was probably one of the best feelings I've had in football. Coming to Hearts at such a young age, coming through the ranks and experiencing highs and lows - that goal made it all worthwhile."

'We were on a five-day bender' - the celebrations

Following the dressing-room celebrations, the players returned to Tynecastle to join up with their families.

Locke: "Chaos, that's the best word to describe it. There was a lot of relief because the build-up had been pretty intense. Ryan McGowan liked a beer, he liked a night out and he'd obviously scored in the game. Ian Black was another one who, being a local lad and Hearts man, he knew what it was all about. They all knew how to enjoy themselves, that's for sure. The celebrations probably lasted a lot longer than they should have. A lot of the boys had a good drink in them. We had a great time at Tynecastle ... you see the boys in a different light with a drink in them.

"On the Sunday, my mates had organised a party in Dalkeith, so Danny Grainger and Ryan came to that and they couldn't believe how well they got treated. They got treated like Gary Barlow and Robbie Williams when they came into the place." 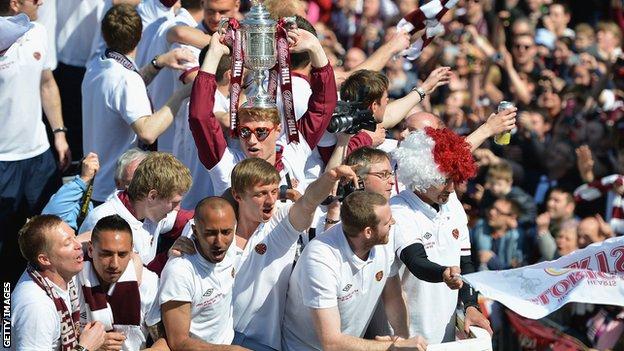 Hearts partied into the 'early, early hours' of the morning before their parade the next day

Grainger: "I think Ryan and I were leading the five-day bender. If that's how Take That were treated every week then maybe I should have gone into the music industry because it was amazing. It really was, it was fantastic. You don't forget memories like that. Looking back, I can see why the likes of Lockey and Ian Black were so nervous. We knew how much it meant to the fans. It's the greatest achievement of my career."

Black: "The majority of us who could still walk hit the town. Others went to bed until the morning when they had to start again for the bus parade. It's definitely the highlight of my career. Finishing your Hearts career on a high with a derby win in the Scottish Cup final, that's the standout game for me."

WAFA coach to restrategise for league