A cricket match between India and Pakistan is one of the biggest draws in sport - watched by a worldwide TV audience of up to a billion people and often an emotional occasion both on and off the field.

The fact it doesn't take place very often these days - and that it's now happening in a World Cup - makes Sunday's match between the two at Old Trafford even more special.

But how big is the rivalry for British Asians? And what do they remember of matches in years gone by?

BBC Asian Network's Ankur Desai, comedian Aatif Nawaz and BBC Get Inspired's Kal Sajad tell The Doosra, a podcast looking at cricket with a British-Asian spin, what India versus Pakistan means to them. 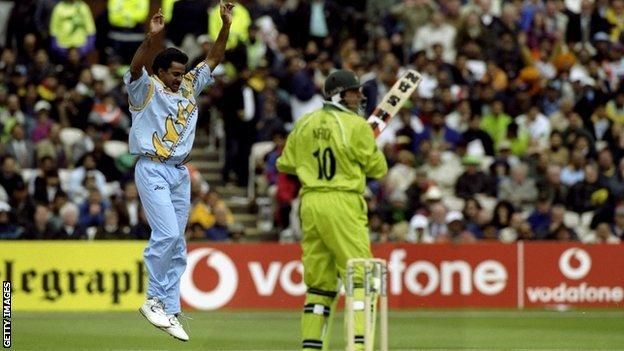 Growing up in the UK, a father would normally give his son a football. But my dad, being of Indian heritage, gave me a cricket bat.

Indians weren't great at football, but in contrast I got a sense of pride from Sachin Tendulkar, who was someone who looked like me, represented me and was somebody I could identify with.

I was at sixth form during the 1999 World Cup in England, when India played Pakistan - a match which also took place at Old Trafford.

My friend and I, thinking we were big brave lads, went into college with our India shirts on. And there were a lot of Pakistani students at that college.

My business study teacher said to us: "Good luck getting through certain parts of town without getting a beating!" But in truth, the rivalry was of a friendly nature. I played for a team called Luton Indians against the likes of Luton Pakistanis and Luton Caribbeans.

The rivalry on the pitch was fierce, but what I loved afterwards was we all got along and had some food and drink afterwards.

I can't wait for Sunday's game. As soon as the fixtures come out, it's the first one you look for. All your energy and focus will go on to the whole weekend of the fixture.

Covering it for Asian Network is a massive privilege. I've done Wimbledon, FA Cup and Champions League finals but watching India v Pakistan is right up there. The atmosphere, the occasion - it's such a big event with so many British Asians there that you feel like you're plugged into something special.

You see the noise and what it means to the fans there, around the world. You know you're at the centre of something unique.

Growing up, it was always about this game. If you don't win the World Cup, then make sure you beat Pakistan. It was far more important to me than beating England, Australia or anyone else.

As I got older it's a bit different. It's more about the curiosity because we play each other less frequently, hence it's hyped up even more.

I actually quite like the Pakistan side. They're such mavericks and exciting to watch. Nowadays, winning the tournament is more important to me than beating Pakistan. It's about adding those stars to the India shirt.

It's great that it's in the north west of England, where there are a lot of Pakistani fans. Usually Indian fans buy up a lot of the tickets, so it will be good to see an equal number of supporters. 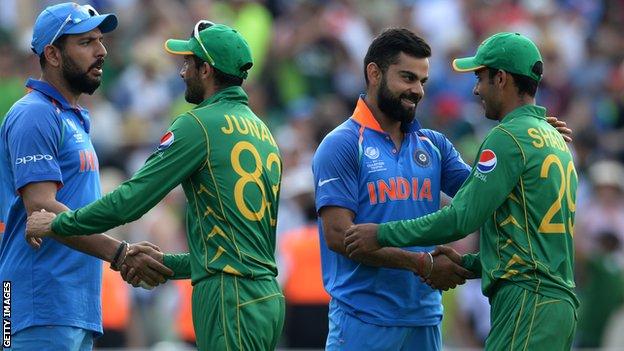 Players from both sides embrace after Pakistan beat India in the final of the 2017 Champions Trophy, the last time the two teams met in a major ICC tournament

Every time Pakistan play India I'm 15 years old all over again - I'm back at school and I'm around my friends.

It's so much more than who wins, who is above who in the rankings, which team progresses to the semi-finals. It's about the verbal beating you'll get in the playground the next day. It's on another level. It's terrifying.

That game at the 1999 World Cup, we watched the first half on a classroom TV. We rushed home and watched the second innings. And we lost.

I did not miss one day of secondary school over seven years but that was the one time I came close. Because it's unrelenting. Kids can be pretty cruel.

It's different now that I'm older. There's not as much anger or verbal jousting, not in an aggressive way. Not from Indian fans. There isn't that interplay anymore. Not even in a fun way.

Having said that, losing to India still hurts. Before the game, I may be like 'oh it's just a game, it doesn't matter who wins, we're brothers, divided by a fake line in the sand, and we're the same colour and unity' … but then Pakistan will lose and it feels like the end of the world, like your wife is going to leave you, you'll never get approved for a credit card, a mortgage, you're going to lose your job, every one is going to hate you.

But in honesty, the further we get away from partition, the more genuine friendships develop between players and cultures, and there's acceptance.

Yes, the politics thing is still there, but Joe Indian and Joe Pakistani don't give a monkeys about all that. We just love the sport. 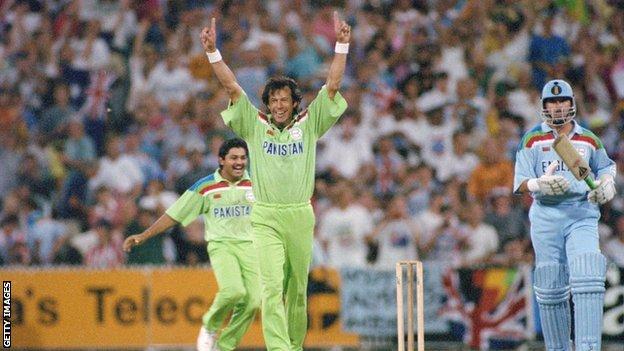 I remember the day I came out as an England fan to my dad. The disappointment in his face will be etched in my mind for eternity.

My parents are both from Pakistan. I'm the youngest of six children born in the UK, and all my siblings support Pakistan.

As a young lad, I was obsessed with cricket and one of my earliest memories is being a five-year-old, sitting cross-legged in front of the TV watching the early morning repeat of the 1992 World Cup final as Pakistan beat England.

At that young age, I supported Pakistan. But as I started to get older, my influences changed and, not being all that immersed in the Asian culture, I started to identify more with England.

It was the 1999 World Cup when it really hit home to me how much cricket, and the India v Pakistan rivalry, meant to my family.

India were going along nicely batting first: 95-1 with Tendulkar still at the crease.

I went to the toilet. I heard screams from the living room. The danger man Tendulkar was gone. Was it down to a smart bit of bowling from Azhar Mahmood? A well-taken catch by Saqlain Mushtaq? A rare lapse in concentration by Tendulkar?

Nope, my dad was convinced that the wicket was down to the fact I had gone for a wee. That superstition was taken to such lengths that he ordered me to the bathroom whenever Pakistan needed a wicket. I reckon I missed at least half of that innings.

And in the final of that tournament against Australia, my dad would turn the television off whenever he thought Pakistan were in trouble.

He thought that by turning it off for 10 minutes Pakistan would have somehow miraculously scored 100 runs in the few overs we missed.

With an Australia win inevitable, my brother and dad decided to go to the local shopping centre for an hour as the stress just got too much.

I can't quite remember what we bought that day, but I'm sure it hasn't lasted as long as the feeling of disappointment my dad felt at Pakistan's capitulation.

England to assess Eoin Morgan and Jason Roy
Next Item