Juli Inkster and Catriona Matthew either side of John Solheim, son of the cup's creator Karsten Solheim

The 16th edition of the Solheim Cup between Europe and the United States begins on Friday, 13 September at Gleneagles, Scotland.

The event follows the same format as the Ryder Cup, with fourball and foursomes matches on the first two days followed by 12 singles on Sunday.

Team USA have won 10 of the previous 15 contests and are attempting to claim a third on the trot after winning four years ago in Germany then defending the title on home soil in Iowa in 2017.

This is the third time the Solheim Cup has been staged in Scotland, with Europe winning on both previous occasions.

Play is scheduled to start at 08:10 BST on Friday and here's what you need to know about the teams, the history and the course.

Scotland's Catriona Matthew captains the home side. The 50-year-old is a veteran of nine Solheim Cups as a player and said the event has been "the highlight of my career every two years".

Hull became the youngest European player in 2013 when she made her debut at the age of 17 and has contributed seven-and-a-half points from 11 matches across her three appearances.

She is one of only three players in the team inside the world top 30, alongside Law in 26th, Hull at 29th and Spain's Carlota Ciganda, who is the highest-ranked European at 12.

Hall won the 2018 Women's British Open and the 23-year-old has won the Ladies European Tour's order of merit for the past two years.

Law, 24, is one of three rookies in the European team, with France's Celine Boutier, 25, and 23-year-old Anne van Dam of the Netherlands. 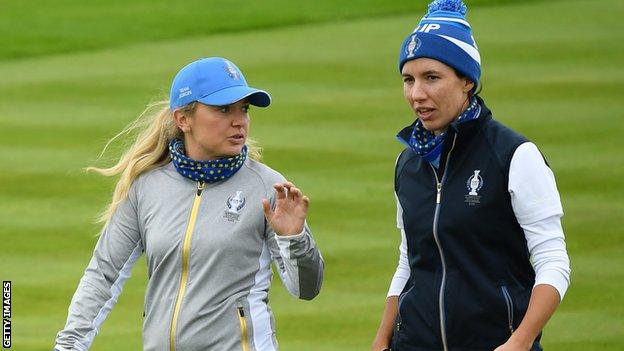 The Stockport-born player picked up her first LPGA Tour victory earlier this season and was one of Matthew's four wildcard picks, along with Boutier, Ewart Shadoff and Suzann Pettersen.

Norway's Pettersen - who has won 19 points in eight Solheim Cups - was a surprise inclusion having missed the 2017 event through injury and then taken time off in November of that year to have a baby.

The 38-year-old had been selected as a vice-captain but despite missing the cut in her first two events back this year, Matthew picked her to play.

The visitors are led by Juli Inkster, who is captaining a relatively inexperienced side for a record third time.

Five of the American dozen are in the world's top 20 but half of her squad are making their first Solheim Cup appearances.

In fact, they have played in just 14 Solheim Cups between them, with three players making their second appearances.

But Inkster thinks making your Solheim Cup bow away from home can actually help.

"If you're a rookie, it's easier to play away because you're not expected to win and you can play a little looser," she said.

"It's easier to bond and you don't have a lot of outside distractions."

Of those, only 21-year-old Nelly Korda at 10th is in the world's top 30. Korda's elder sister Jessica, 26, is also in the team, making them the first siblings to play for the US at the Solheim Cup.

"We're similar in the way we look, we get called each other's names, and our golf games are a similar style," Jessica told BBC Sport.

"When I [recently] had a rules official saying I was going to be warned, he called me Nelly."

The American team also features world number three Lexi Thompson. The 24-year-old became the youngest player to qualify for the US Women's Open when she was 12

At the age of 16, she became the youngest winner of an LPGA event and was 19 when she won her first but so far only major title.

She has lost only two of her 11 Solheim Cup matches, picking up seven points in three appearances.

Morgan Pressel is the most experienced of the US players and is making her sixth appearance. The 31-year-old has won 10 and lost seven of her 19 matches.

Norwegian-born American golf club maker Karsten Solheim was the driving force behind the formation of the event that bears his name.

Solheim only took up golf at the age of 42 but set about redesigning the putter and went on to establish Karsten Manufacturing, makers of the Ping brand of golf clubs.

The first Solheim Cup was staged at Lake Nona, Florida in 1990.

The US were comfortable 11½-4½ winners in the inaugural match but a Laura Davies-inspired Europe claimed victory two years later at Dalmahoy, near Edinburgh.

The US won the next three events by wide margins before the event returned to Scotland in 2000, with Europe triumphing at Loch Lomond.

Another home victory in 2003 for Europe was followed by three American successes. But after a narrow 15-13 win in Ireland, Europe recorded their first away victory in 2013 with a resounding 18-10 win in Colorado.

The US turned to Solheim Cup veteran Inkster as captain for the 2015 event in Germany but while Europe led 10-6 heading into Sunday's singles, the US won eight-and-a-half points out of 12 to snatch victory.

The PGA Centenary course hosted the 2014 Ryder Cup, when Europe's men beat their US counterparts 16½-11½ and there are a number of holes that could be key to the outcome of matches.

The second hole - Wester Greenwells - the first par five and danger lurks for those chasing the green in two with bunkers and water waiting for errant shots.

The fifth hole - Crookit Cratur - always rated the toughest hole on the course, with another well-protected green, particularly by marshland short and right.

The 14th hole - Nebit Knowe - a real risk-reward par four of just 232 yards. The green is shallow and well-guarded by bunkers with the safer option being to bail out to the left.

The 16th hole - Lochan Loup - do you lay up short of the water, or go for the green in two on this long par five? A heavily contoured green means there's no certainty you'll get down in two.

The 18th hole - Dun Roamin' - for matches that make it up the last, there is a par five to finish. The green is narrow and surrounded by bunkers and hollows that will make for challenging up-and-downs.

Sam Bird signs for Jaguar for next season

Muntari: FIFA must do more to fight racism

No fans for remainder of PGA Tour

I needed miracle to sway Eddie Jones
Next Item