Champions League winners in June, five points clear at the top of the Premier League table in mid-September and on an incredible winning streak that stretches back to March.

So just how long can Liverpool keep winning? Is Sergio Aguero on course for the Golden Boot? And why is Chelsea's current season stirring memories of a past title-winning campaign?

BBC Sport looks into some of the weekend's Premier League statistics. 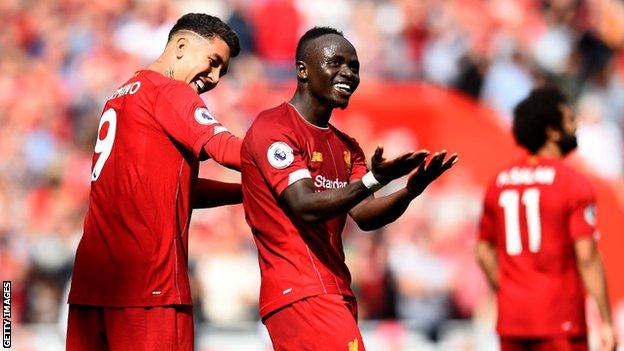 Liverpool have a 100% record in the Premier League this season

Five wins from five have given Liverpool the perfect start to the season as they sit top of the Premier League with 15 points, five ahead of Manchester City.

It also means they have become only the fourth team to win 14 top-flight fixtures in a row, equalling Arsenal's record of 14 in 2002 and putting them one behind Manchester City's run of 15 in a row this year and four behind the 18 consecutive league wins City achieved in 2017.

Arsenal's run was ended by a 2-2 draw at West Ham on 24 August 2002 while Tottenham brought City's 15-game winning run to an end last month. Their 18-game winning run, meanwhile, was halted by Crystal Palace, who held Pep Guardiola's side to a goalless draw on 31 December 2017.

So what chance have Liverpool of surpassing Manchester City's record run? These are their next five games in the Premier League:

Last season, Liverpool beat Tottenham home and away but they drew each of the corresponding fixtures with Chelsea, Manchester United and Leicester. The last time they played Sheffield United in the Premier League was back in the 2006-07 season and on that occasion the Blades managed to hold the Reds to a 1-1 draw at Bramall Lane.

To add to past form against those sides, all apart from Sheffield United currently occupy the top six.

Jurgen Klopp's side will certainly have to be at their best to maintain their run and overtake City's record. 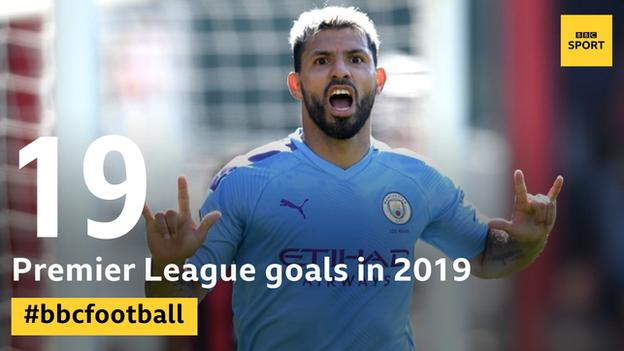 For those searching for the secret to eternal youth, they could do worse than have a look in Sergio Aguero's cupboard.

The 31-year-old Manchester City striker appears to be only getting better with age and on Saturday he scored for the fifth consecutive game since the start of the season with his side's first in the 3-2 defeat at Norwich.

Aguero is just the third player to achieve that feat in the Premier League, after the late Jose Antonio Reyes for Arsenal in 2004-05 and Wayne Rooney for Manchester United in 2011-12.

Both those players went on to have the most prolific seasons of their careers after such a strong start.

Aguero has scored 30 goals or more in four of the past five seasons. He has seven goals already in this campaign and, with a home game against Watford up next for City, there is little reason to believe he will not keep up his impressive run of form in front of goal.

The chink in City's armour?

There are not many obvious weaknesses in the Manchester City team, but coping with set-pieces certainly seems to be a problem for them.

In Saturday's 3-2 defeat at Norwich the hosts' first goal came from a corner.

Eight of the last nine goals Manchester City have conceded in the Premier League have come via set-pieces, with four of those from corners.

Widen the net further to include the past 12 months and more than half of the - admittedly few - goals they have conceded have been from set-pieces.

Despite those statistics, Guardiola does not believe his side have an issue dealing with them.

"We've defended them really well in the past and in four years our standard has been so high, so it is not a weakness," he said.

The kids are all right 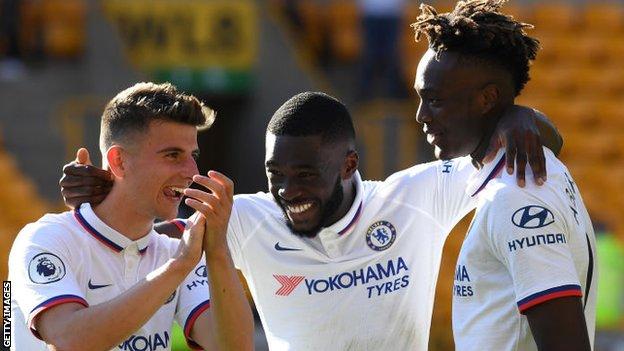 As a supporter, there are few better sights than seeing a home-grown player come through the system and have a big impact for your club.

Chelsea fans are currently getting to see several of their own doing just that.

A combination of the arrival of club legend Frank Lampard as manager and the Blues' transfer ban means they are having to turn to the kids much more than in recent times and they are firmly reaping the rewards.

In Saturday's 5-2 win against Wolves all of Chelsea's goals were scored by academy products aged 21 or under.

Even more impressive is the fact all eight of their Premier League goals this season have been scored by English players (Tammy Abraham - five, Mason Mount - two, Fikayo Tomori - one).

This is the Blues' longest streak of consecutive Premier League goals by English players since a run of 11 in a row from September 1993 to January 1994 (Gavin Peacock - four, Neil Shipperley - three, Mark Stein - three, Dennis Wise - one).

"We are trying to give chances to young players but only because they deserve it," Lampard told Match of the Day.

"I know how hard they work in the academy to promote not just good young players but also good attitudes with good ethics - what can get you to be a top player."

Already this term, English Under-21 players have played 960 minutes for Chelsea in the Premier League.

That means this season's team is well on the way to surpassing the total number of minutes played by Under-21 English players in 2004-05 for the Blues.

That season didn't turn out too badly for Chelsea either - they won the Premier League title.

Arsenal display had me screaming at the TV
Next Item