Dina Asher-Smith is hoping to create history as she leads Britain's hopes of winning medals at the World Athletics Championships, which begin on Friday.

"It's refreshing we are expected to do something," she told BBC Sport.

Asher-Smith, 1500m runner Laura Muir and heptathlete Katarina Johnson-Thompson are the trio tipped to win individual medals, while Great Britain are expected to win more medals in the relays.

Kent-born Asher-Smith is aiming to better Farah's achievement by winning three - in the 100m, 200m and 4x100m relay - although no British woman has won individual world medals in two events.

She came agonisingly close to breaking her world medal duck two years ago when she missed out on 200m bronze by 0.07 seconds.

Since then the Blackheath & Bromley Harrier has achieved her first major sprint double at last year's European Championships and followed it up this season with great displays in the Diamond League.

Her 10.88secs and 22.08secs places her fourth on the lists of fastest times in the 100m and 200m this year, and she has beaten many of her rivals including double Olympic champion Shelly-Ann Fraser-Pryce.

The Briton got the better of the Jamaican in Brussels, but added that we shouldn't read too much into those results.

"I've raced these women at different stages in the season," she said. "It might be that I'm in front of them, but they are in a heavy period of training. Or I might be behind, but I've been loading my legs and they've been peaking for that race."

She added: "Racing the best girls has been really good mentally.

"Whenever I've gone into a race this season I've had to bring my 'A' game and that will stand me in good stead going into the World Championships."

When is Asher-Smith racing?

You can watch all her races live on BBC TV and the BBC Sport website, with further coverage on BBC Radio 5 Live:

I'm not worried about my lack of racing - Muir 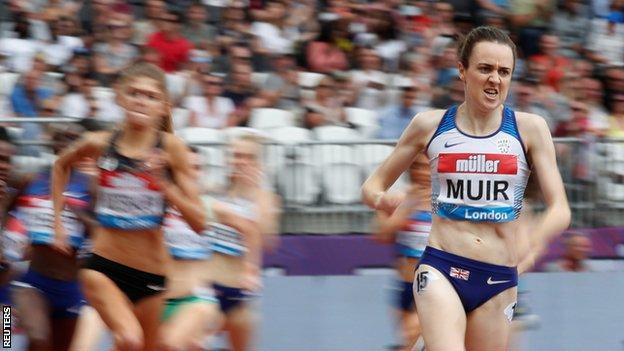 Scotland's European 1500m champion Muir is another major British medal contender, although there are doubts over her race fitness having not competed since July because of a calf problem. Prior to picking up the injury she had top-three finishes in all five of the Diamond League races.

"An injury is never great, but I have to put things into perspective," she told BBC Sport. "Had it been last year I would have missed out winning at the Europeans and the Diamond League. All things considered I'm lucky that these Championships are quite late."

The 26-year-old, who has been at a training camp in South Africa, also said she was unperturbed by her lack of racing for three months heading into the competition.

"I'm fortunate, with my training, I can race straight off the bat. I've got the heats and semi-finals to see what the racing is like before the final," Muir added.

Having first made a major impact by taking the Diamond League 1500m title in 2016, Muir finished fourth in the event at London 2017. She won her first major outdoor title a year later with European gold in Berlin, and started this season by winning European Indoor gold.

Hopes of Muir winning a world outdoor medal have been further raised by the withdrawal of Ethiopia's world record holder Genzebe Dibaba, while Olympic champion Faith Kipyegon has only recently returned from having her first child and there is uncertainty whether Dutch mile-record holder Sifan Hassan will compete.

"It's a World Championships and will always be really tough," said Muir. "When you run well year after year the pressure gets higher, but I've shown in Championships I can cope with it very well." 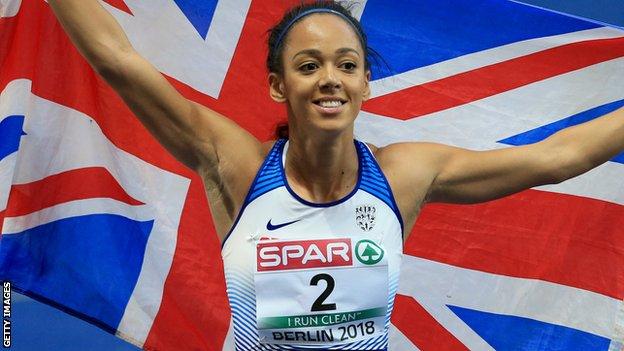 Johnson-Thompson, like her team-mates, is seeking her first major outdoor medal on the world stage. The 26-year-old Liverpool-born athlete was expected to emulate the achievements of compatriot and former world and Olympic champion Jessica Ennis-Hill after finishing fifth at the 2013 World Championships, but that promise has yet to be fulfilled.

The World Indoor pentathlon winner and Commonwealth champion faces the difficult test of overcoming Belgium's world and Olympic champion Nafissatou Thiam, who beat her to the European title in 2018.

"She's a phenomenal athlete and has been getting better and better," Johnson-Thomson told BBC Sport. "However, I've always thought I have to concentrate on myself. If I do my best I can win."

She added, jokingly: "If I do my absolute best there still a chance I could come second."

'We can achieve something special'

Cardiff Half Marathon postponed until 2021

Kane and Son team up to secure Spurs win

Five reasons to watch the Carabao Cup
Previous Item
NEXT

Vettel the right winner for Ferrari - Palmer
Next Item