Mo Farah insists he has "not done anything wrong" as he faced questions over his former coach being banned for doping violations.

Farah has never failed a drugs test and said there was an "agenda" against him.

"There is no more I can do," the 36-year-old said, adding he was one of the world's "most tested athletes".

Speaking to journalists in Chicago, where he will run in Sunday's marathon, Farah said: "I am probably one of the most tested athletes in the world.

"I get tested all the time and I'm happy to be tested anytime, anywhere and for my sample to be used to keep and freeze it."

Farah even appeared to suggest media scrutiny of him was motivated by racism, the four-time Olympic champion adding: "There is a clear agenda to this. I know where you are going with it. I have seen it with Raheem Sterling and Lewis Hamilton."

Farah was coached by Salazar at the Nike Oregon Project, which was closed down by the sporting brand earlier on Friday.

Salazar's ban followed a four-year investigation by the US Anti-Doping Agency (Usada) and a two-year court battle behind closed doors.

The investigation began following a BBC Panorama programme in 2015, meanwhile UK Athletics (UKA), the sport's UK governing body, conducted its own review into the claims, and gave Farah the green light to continue working the American.

Speaking on Friday, Farah said he flew to meet Salazar at the time to "get some answers".

"He assured me at the time, these are just allegations, this is not true. He promised me. That hasn't been true," he said.

That was as close as Farah got to criticising his former coach, choosing instead to blame the media when asked repeatedly whether he was disappointed in Salazar.

The Briton said he "has no time for anyone who has crossed the line" and asked if Salazar's ban will taint his own legacy Farah replied: "Not at all. It's just what you want to make it. For me I believe in what I do.

"This is not about Mo Farah, this is about Alberto Salazar. I am not Alberto.

"I was never given anything. I am not on testosterone or whatever it is. At the time I never saw any wrongdoing when I was there. This allegation is about Salazar, not Mo Farah."

An animated Farah said: "I have not done anything wrong. I have not failed any tests and I am happy to be tested anytime anywhere.

"I feel let down by you guys to be honest, there is no allegation against me.

"It's taken four years for Usada to get to this position it has right now. The first time I am hearing it is when you guys are reporting it."

Salazar, 61, has said he was "shocked" by the outcome of Usada's investigation and would appeal against his ban, which Nike has said it will support.

Nike also stressed Usada's findings that performance-enhancing drugs had not been used on or by Nike Oregon Project athletes. 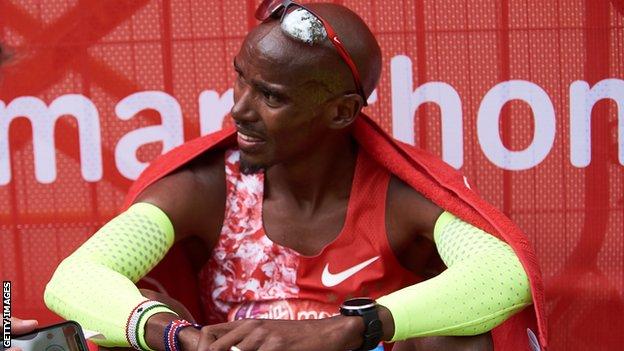 Farah said he flew to meet Salazar to "get some answers"

GB's Watson into first WTA final since 2016
Next Item