Novak Djokovic made a winning start at the ATP Finals but Roger Federer was beaten by Dominic Thiem in his opener.

Djokovic, who is chasing a record-equalling sixth title and trying to overhaul Rafael Nadal as world number one, was imperious, beating Italian eighth seed Matteo Berrettini 6-2 6-1.

The Swiss, 38, was uncharacteristically wayward while Thiem impressed with his powerful hitting.

Federer and Djokovic meet later in Group Bjorn Borg, their first match since their marathon Wimbledon final last July and one Federer may now have to win to reach the semi-finals of the season-ending championships.

Djokovic can overtake Nadal and become year-end number one this week but must reach the final to stand a chance.

Nadal is in Group Andre Agassi but is an injury doubt for the tournament with a stomach muscle issue, although the Spaniard said on Friday that he is confident of playing against Alexander Zverev in his opener on Monday. 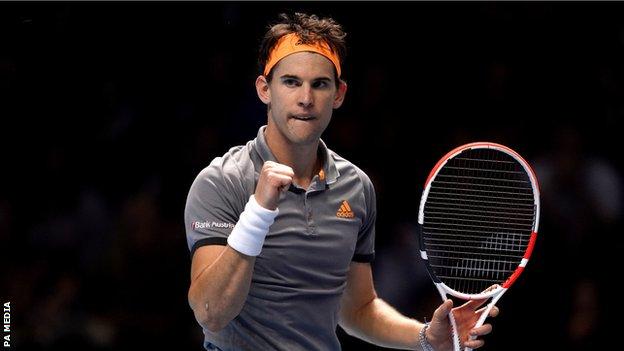 This is the second year in a row that Federer has lost his opening match at the ATP Finals, having been defeated by Kei Nishikori 12 months ago.

The 20-time Grand Slam champion made a slow start, losing his serve in the opening game of the match, and despite levelling the scores three games later, a string of errors off the Swiss' racquet at 5-5 saw Thiem take the decisive break of the first set.

Federer struggled to create momentum because of his errors but threatened to take the upper hand early in the second set, only for Thiem to save break point with a brilliant forehand on the run.

The Austrian was on the front foot for much of the match and pushed his opponent in most of his second-set service games before eventually clinching another break for a 6-5 lead thanks to a crunching forehand, a fine return and Federer's missed volley.

Federer had two opportunities to break back when his opponent served for the match but was unable to convert - and Thiem sealed the win on his second match point.

He has now beaten Federer in each of their past three meetings and leads their overall head-to-head 5-2.

Djokovic is arguably the favourite in London, and securing the title would see him equal Federer's total of six wins at the Tour Finals.

He won the Paris Masters last week and continued his fine form against 23-year-old Berrettini, winning in just 63 minutes.

The Italian, making his debut at the event, played well but could not keep up with the relentless Djokovic.

Berrettini regularly served above 130mph, and landed 71% of his first serves, but Djokovic broke serve twice in the first set and three times in the second.

The 2019 Australian and Wimbledon champion was rarely troubled on his own serve and hit just eight unforced errors.

"It was not easy for him playing his first World Tour Finals match," Djokovic said.

"I knew he would be a bit more nervous at the beginning. He has got big weapons with the serve and forehand but I managed to play really solid throughout the whole match." 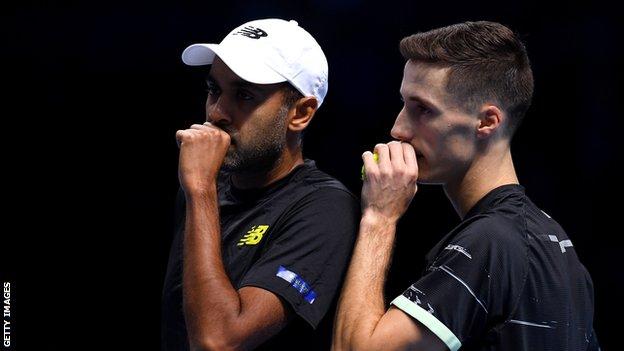 The fourth seeds lost 6-3 6-4 to Raven Klaasen and Michael Venus.

Londoner Salisbury, who was a 'hitter' at the tournament four years ago, is the only British player in the event.

He and Ram can still progress from the group, which also includes second seeds Lukasz Kubot and Marcelo Melo, and eighth seeds Ivan Dodig and Filip Polasek.

'They were lucky' - Rodri

Jones can be 'big help' to Rangers

Flintoff opens up about battle with bulimia