Emily Scarratt reached 500 points for England, despite seeing an early try ruled out

Lydia Thompson scored a last-minute try as an error-strewn England beat France 17-15 in a thriller in Exeter.

Jessy Tremouliere's penalty and Laure Sansus' try put the visitors 8-0 ahead before two Emily Scarratt penalties had reduced the arrears by half-time.

Caroline Boujard's 67th-minute try looked to have won it for France but, with both sides down to 14 players, Thompson went over to seal the win.

The victory was England's fourth in a row over France - a record going back to March 2018 when they lost what was a Six Nations decider to a last-minute try in Grenoble.

Despite having the better share of possession and territory, England too often fluffed their lines in the opening period in front of 9,699 fans at Sandy Park. They made handling errors at key times and seemed to overcomplicate things with ball in hand.

France should have taken a 10th-minute lead, but hooker Agathe Sochat knocked on as she was about to go over the England tryline following a period of pressure.

The hosts should have capitalised five minutes later as centre Scarratt, named World Player of the Year earlier this month, scythed through the France defence, but she lost the ball diving for the line thanks to an excellent last-ditch tackle by winger Boujard.

Tremouliere put the hosts ahead with a penalty after 21 minutes before Sansus scored their first try four minutes later. England misjudged a high kick and Sansus chipped over the hosts defence and got a toe to the ball before England full-back Sarah McKenna could gather, allowing the scrum-half to go over unchallenged.

While Scarratt reduced the deficit to two points with two penalties, the French defence was steadfast as England tried in vain to get more before half-time. 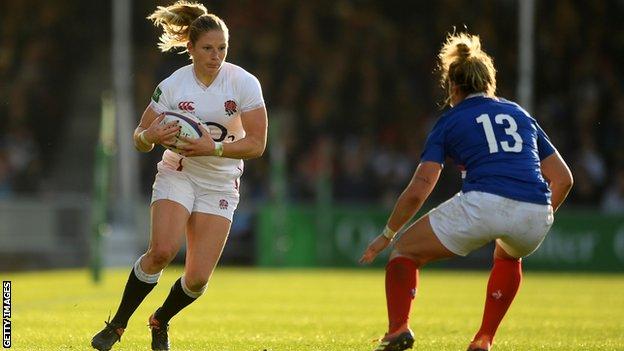 Lydia Thompson scored England's only try in the final minute

Scarratt kicked a penalty early in the second half, before Tremouliere missed a straightforward effort to regain her side's one-point lead soon after.

Another Scarratt penalty put England further clear but, like in the first half, the Red Roses failed to turn their better positions into points as they made handling errors within striking distance of the France line.

England were made to pay with 15 minutes to go when France won a scrum five metres out, from which the elusive Sansus created space and fed Boujard, who went over from close range.

The hosts' hopes of victory looked to have evaporated when second row Zoe Aldcroft was yellow carded with seven minutes left after a video review showed her putting in a high shot at a ruck.

But when French number eight Romane Menager was sin-binned two minutes later after a number of offsides, England were re-invigorated and inspired to go for the win.

And that victory duly arrived when Natasha Hunt gathered Morgane Peyronnet's poor clearance kick on France's 22 and set Scarratt on a sprint from centre to right, and she in turn fed Thompson, who dived over in the corner.

"International rugby is about learning quickly and we made a few errors that we made last week.

"I'm a bit frustrated. I'm thrilled with the win, and one of the things we've learned to do really well is win tight games. We did it twice in the Super Series from very difficult positions and we've done it again today.

"We had the character to stay in the game and the composure to finish. When you've got a player like Lydia Thompson on the field, who specialises in tries, you're always in with a shout.

"It was a good connection to score the try at the end. It looked simple, but under massive pressure we executed and we finished.

"But it is the performance that we wanted? No, it's not."

"To get an opportunity like that at the end is great. When you've got players like Lydia outside you who eat up the turf for fun it's just important to give her the ball.

"It wasn't the fluid, perfect performance that we are aiming towards, but it probably doesn't need to be right now.

"That's what you want to put out every single time you go out there - but it's also unrealistic."

“Kotoko is bigger and can even sponsor GFA”

Robins' Wynne to have knee surgery

Glasgow Warriors hold on to win
Next Item