Haaland was linked with Manchester United before joining Dortmund

Erling Braut Haaland continued his remarkable scoring form this season with two more goals to give Borussia Dortmund the advantage over Paris St-Germain in their Champions League last-16 tie.

The 19-year-old Norwegian showed two distinct sides of his impressive game with two second-half strikes - the first a predatory finish after Raphael Guerreiro's shot was blocked and the second a left-footed thunderbolt from 20 yards.

They took his tally for the season to a stunning 39 goals in only 29 appearances, and 11 in seven since joining Dortmund in January.

In between the Haaland goals, Neymar briefly drew the visitors level, slotting in a low Kylian Mbappe cross on his return following four matches out with a rib injury.

But he was outshone by Haaland, who gave the German side the result their positive display deserved and a narrow lead to take to the Parc des Princes for the second leg on 11 March.

The result also marks a disappointing return to Dortmund for PSG boss Thomas Tuchel, who spent two successful seasons at Dortmund from 2015 to 2017 before being sacked in acrimonious circumstances shortly after winning the German Cup.

However, Tuchel and his side will be confident that they can turn the tie in their favour and go beyond the last 16 for the first time in four seasons on a ground where they have netted 18 times in four games in 2020.

Haaland the talk of Europe again

There is a different pressure on Dortmund to that currently weighing on their opponents - not one exerted by a weight of money spent and resultant expectation, but by time and their place in football's food chain.

As has been the case in previous years, you suspect the young and supremely talented collection of players that have been brought together at Signal Iduna Park will be picked off by one of Europe's apex predators, possibly as early as the coming summer.

Haaland has only been at the club a few months but you know that even now rivals are eyeing him enviously.

How Manchester United must wish they had been able to convince him to join them from Austrian side RB Salzburg instead of moving to the Bundesliga.

Right now, though, Dortmund and the son of former Leeds and Manchester City midfielder Alf Inge Haaland are perfect for each other.

He was quiet for much of the first half, restricted to a couple of half-chances. But he is a natural goalscorer, always alive to an opportunity, and when the ball fell loose in the box in the 69th minute there was never any doubt who would be first to it.

His second goal was a different matter altogether - a brute of a shot coming after a gem of a first touch, rising from the moment it left his boot and flashing past keeper Keylor Navas' dive to his right. It was a goal born from confidence but executed with brilliance.

"These are the moments you play football for. I really enjoyed it," said Haaland.

Team-mate Axel Witsel told French broadcaster RMC Sport: "He still has huge room for improvement but he is on the road to becoming a truly great player."

Haaland is not the only high-profile, high-performing teenage talent in this Dortmund side, though.

England's Jadon Sancho impressed too with his direct running, dribbling and constant awareness of space and his team-mates' location.

At the back, 20-year-old Dan-Axel Zagadou was strong and composed in the face of a PSG attack that has scored 44 goals in 12 games this year.

PSG can and should be better

With the French title becoming increasingly a formality season on season, PSG's progress is measured by their Champions League performance and in that regard they have plateaued, exiting at this stage in each of the past three campaigns.

There has been a sense, though, that this time around things may be different under manager Tuchel.

This is a more balanced PSG side than previous iterations and one tougher to break down, as evidenced by their concession of only two goals in six group games this season - the fewest of any side in the competition.

They are not bad going forward either, especially when they can add Neymar to a team that scored 16 times in four games in his absence.

When he stayed on his feet, the Brazilian was a constant menace, dropping deep to gather the ball before driving at pace at an increasingly fearful defence.

He flashed an early free-kick wide, was rewarded for his alertness to tap home the equaliser and could have dragged his side level again late in the game with a fierce shot that struck the outside of the post.

Ultimately, though, PSG did not create enough, with Angel di Maria missing for large periods and Mbappe a disappointment, despite his assist for the goal.

The runaway Ligue 1 leaders have another chance to put things right but are once again faced with the prospect of an exit way earlier than their lavish outlay demands.

"We didn't have enough possession, we made too many easy mistakes, we weren't smart enough and we lost the ball too early," said Tuchel. "It's difficult, but it's 2-1 and we still have a few games left to get back into the rhythm." 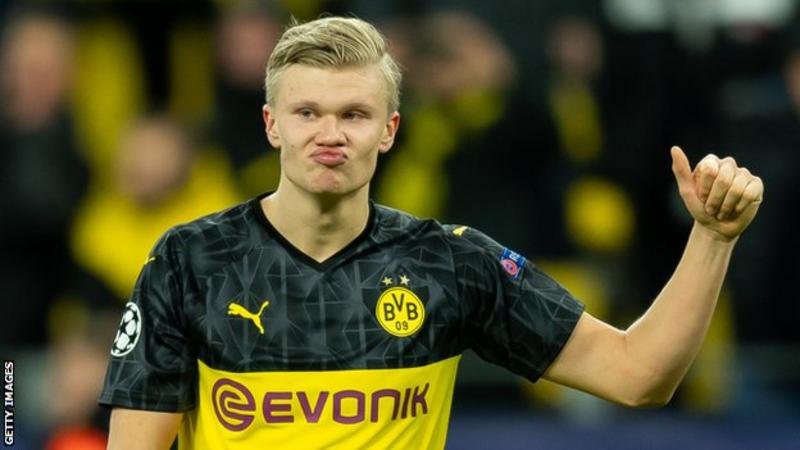 Haaland has scored 10 Champions League goals in seven appearances, reaching the tally four games quicker than any other player in the competition's history

'We are going to build something special'
Next Item