Like many modern runners, the former French national team member uses technology as a key element in helping him hit a new personal best.

Gadgets are as essential a part of a runner's kit as the shoes on their feet. Few head out these days without a step counter, GPS watch, smartphone or smartwatch.

The wearables keep an eye on the distance covered, pace, heart rate and cadence - helping to ensure they get as much out of the session as possible.

"I'm a scientist as well as a runner so when I want data I want to get reliable data," said Mr Adam.

Unfortunately, he said, many wearables do not gather data accurately.

One study by consumer group Which? suggested many fitness trackers underestimated the distance runners cover - with the least accurate adding unnecessary miles to a long run.

"You can get data with a GPS watch but you do not know how the algorithm is made or its accuracy," he said. "If you want to analyse the data, it needs to be available to you."

In a bid to manage his workouts better, Mr Adam is now trialling a wearable that has emerged from medical research.

Called GaitUp, the sensor has been developed by Dr Benoit Mariani, based on his work on spotting the early signs of degenerative diseases such as Parkinson's.

These physical signs, says Dr Mariani, make themselves felt in very subtle ways long before standard tests can catch them.

"If you have a muscle weakness or neurological disorder it will be reflected in your gait first," he said.

"Those signs have been under the radar because there's been no easy tool to measure them."

Changes in the way people walk can be as revealing as those seen in other recognised markers of bodily health - heart rate, blood pressure, body temperature, respiration rate and oxygen saturation. 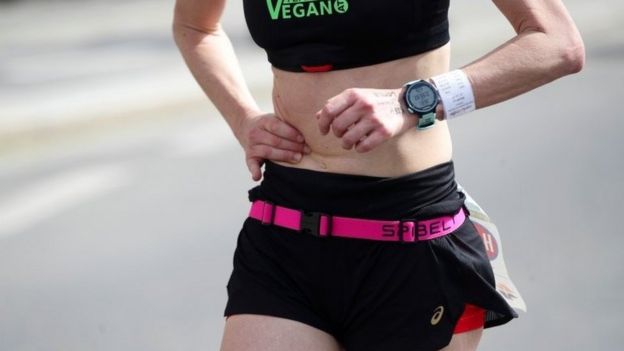 Regular runners monitor their workouts with a variety of wearable sensors

The sensor developed by Dr Mariani's engineering team does more than just measure steps. It can capture rear and forefoot strike angles, as well as the amount of time each foot is in contact with the ground.

"We're interested in the quality of the gait," he said.

He is not the only one. Researchers are keen to get better data about the way elite athletes run, says sports scientist Dr Yannis Pitsiladis from the University of Brighton.

He is part of the long-term Sub2Hrs research project that aims to develop the training methods, techniques and technology that will help a runner set a recognised world record for running the marathon in under two hours.

On 12 October this year, Kenyan running great Eliud Kipchoge broke that barrier but the help he got, from a phalanx of pace-setters and an electric vehicle, meant it was not recognised as a world record.

"To break the sub-two hour barrier, you need to get everything right," Dr Pitsiladis told the BBC.

"You need to identify the right athlete, right weather conditions, right track and also you need bio-energetics," he said.

Making sure the minimal amount of energy is expended at each step of the marathon will be key, he said.

"The more economical you are, the more you can maintain that pace until the end of the race.

"Anything you do to make you more economical, whether it is the shoe, or the data, or the terrain you are running on being 1% or 2% or 3% better will have a huge impact on your performance," he said.

It took an improvement of less than 0.5% for Kipchoge to shift his fastest marathon time below the two-hour mark. Improving by 1% or more would mean smashing the barrier.

"With these kinds of athletes, I would argue that we have not got the best out of them yet," said Dr Pitsiladis. "There's not a lot of science in their training and a lot of these athletes train themselves."

There was ample room for improvement, such as refining their stride pattern or pacing, he said. Sensors are now so small that they can be worn during a race without becoming a burden.

Until now, most analysis of pace and performance has happened on a treadmill or after an event but this does not really capture what an athlete undergoes while racing, said Dr Pitsiladis.

For instance, treadmills can exaggerate the way a foot rolls during each step and give a false sense of how a runner moves.

After-the-event analysis of the way a runner moves during a race or training run is useful, he said, but it would be better to do it as they are running and adjust as they go.

Mr Adam used GaitUp to prepare for the New York City marathon and it helped him become the fastest French finisher in that race, hitting a time of 2h 26m. 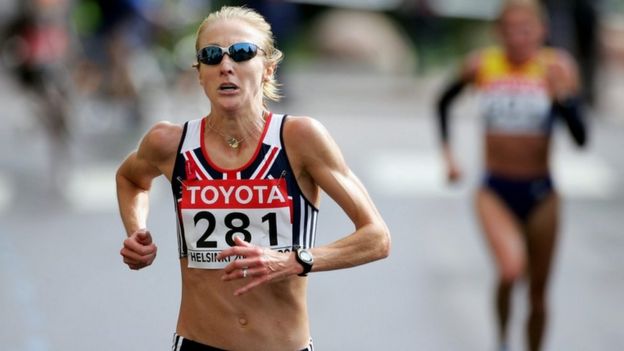 Runners such as Paula Radcliffe excelled despite not running "perfect" races

Running coach Sam Murphy questioned whether the information provided by sensors such as GaitUp was too comprehensive.

"What are you actually going to do about the information that tells you your left foot externally rotates more than your right?" she asked. "Or that your take-off angle is too flat?"

Many elite athletes such as Haile Gebrselassie and Paula Radcliffe had "asymmetries" and "quirks", she said, suggesting the body can work around the disadvantages physiology or upbringing may have imposed on them.

Also, she added, given that runners typically take about 10,000 strides per hour, altering each foot strike to make it perfect could be difficult.

But she conceded that having "greater awareness" of how people run and what they do when they run was undoubtedly useful.

Steady improvement was all about acting on feedback, said Ms Murphy.

"Sometimes getting that data or feedback internally may be more impactful than from an external source such as these devices," she said. "We aren't machines, we're way, way smarter than that."

Online election ads - who is targeting whom?
Previous Item
NEXT