Some AirPods Pro owners have been complaining about degraded noise cancellation in recent weeks, claiming that Apple’s latest earbuds suddenly got less effective at silencing ambient noise after receiving a firmware update. Rtings.com retested the AirPods Pro and found their noise canceling capabilities to be worse after firmware update 2C54. But affected customers say the trouble began even earlier with firmware version 2B588, which rolled out in November. (Apple later pulled firmware 2C54 for unknown reasons.)

This phenomenon — the perception that a software update has “ruined” noise cancellation — has also been reported by owners of Bose and Sony headphones. Bose has faced a months-long controversy over its QuietComfort 35 II headphones, with some customers insisting that an update drastically worsened the level of noise cancellation from the cans compared to their original out-of-the-box performance. There are a lot of people who say they’ve experienced this issue, and it’s escalated to the point where Bose is now visiting customers at home to get a handle on whatever’s going on. Sony also dealt with similar complaints about its 1000XM3 headphones.

Are companies really screwing up this badly, or are customers imagining a problem where one doesn’t exist? The Rtings tests suggest something changed; the site found that Apple has also been slightly tweaking the sound profile of the AirPods Pro with these updates. A few editors at The Verge think they’ve noticed a difference, and others haven’t, but that’s by no means scientific.

Since the original AirPods, Apple has chosen to make the firmware update process completely invisible to customers. The entire process happens in the background without so much as a single notification. You can’t reject AirPods software updates, nor is there any direct way to force the update process on demand; you plug a charging cable into your AirPods case, put them near your iPhone, and wait. Once a firmware update is installed, you’ll notice the new version in settings. 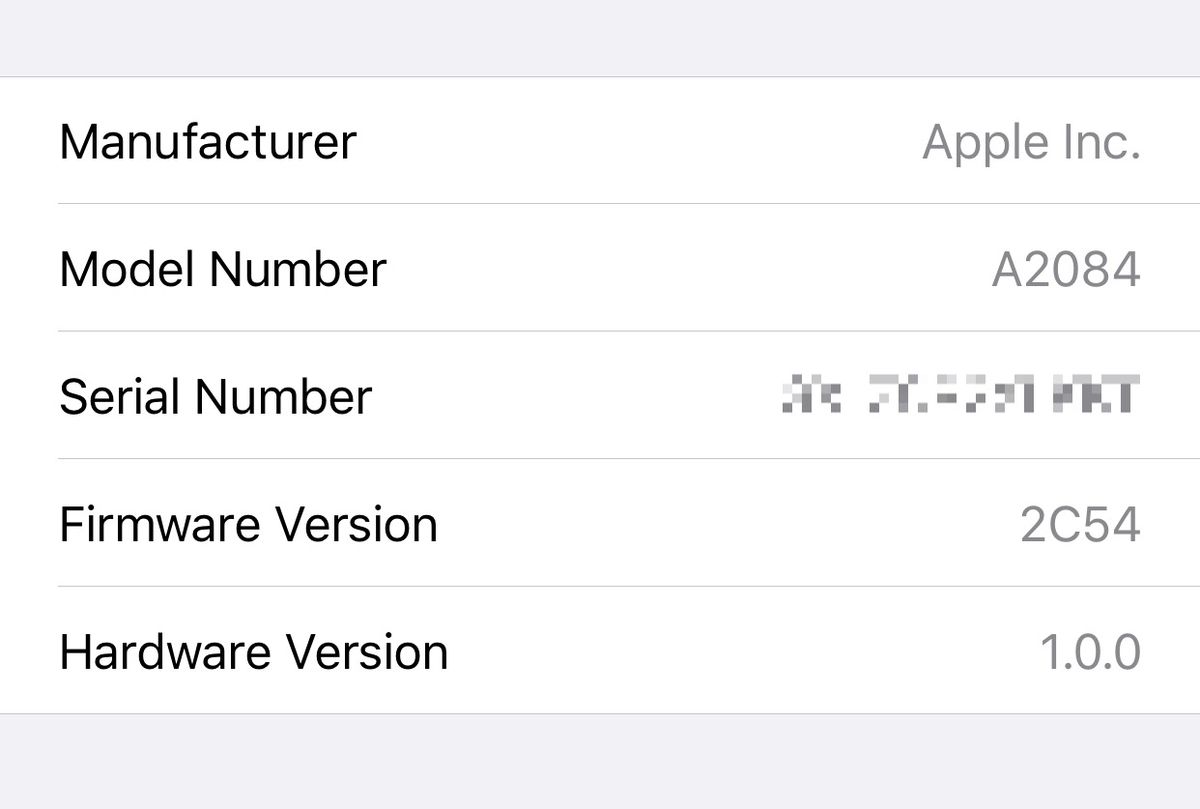 (To check, open Settings, then pick General, then About. Whenever your AirPods are connected to your iPhone or iPad, you’ll see a section for them beneath the “EID” row.)

This everything-happens-in-the-background approach means there’s no way to downgrade or revert an AirPods Pro update back to a previous one if you encounter a problem. Some AirPods Pro owners are convinced noise cancellation took a downturn right after that first 2B588 update, and they were left without any method of going back.

Unlike other earbud makers including Sony and even Amazon, Apple doesn’t let you adjust the intensity of noise cancellation from the settings menu. The AirPods Pro are designed to dynamically adjust how much noise cancellation is applied on the fly based on your environment.

But to the end user, the feature is either on or off, and that’s not what I’d call ideal. Some people always want the maximum amount — especially on a plane or during a noisy commute — but others can feel a slight discomfort from the noise cancellation technology (or in some cases even get a little dizzy) when it’s fully cranked up.

It’s possible that Apple decided to turn the maximum noise canceling knob down ever so slightly without telling anyone to avoid any ill effects, but I really hope not. Letting customers choose from multiple levels of noise cancellation would make the AirPods Pro a hair more complicated to use, but might solve this situation for everyone. People who want their cocoon of silence (and have no issues when noise cancellation is dialed up to 11) can have it, and everyone else can find whatever level offers the best balance of comfort and NC.

The Verge has reached out to Apple for comment on the situation, and I’ll update this story should the company respond.

1st signs of the Google Pixel 4a surface
Previous Item
NEXT