‘My boss lets me set my own salary’

Where 25-year-old Cecilia Manduca works there is a "pay self-assessment process". Put simply, the workers there decide how much they are worth and should be paid.

"I felt a lot of doubts asking for that raise," she told BBC Radio 5 Live's Wake Up To Money.

"It took a lot of talks with other people. I was aware that my job had changed. I was aware I was going way beyond my targets.

"I knew that from a rational point of view I deserved that higher rate. But I had a lot of self-doubt and I felt sort of greedy because there's always a stigma - a sense you should feel happy with what you have.

"When I spoke with my colleagues internally and asked for advice, the advice they gave me was that yes I did deserve it and I was worth it."

Her employer, GrantTree, helps UK business get government funding and all of its 45 staff set their own salary, which they can review as often as they like.

Self-set pay is the latest innovation among companies that are competing for the top talent and want to show they offer the most attractive employment terms.

The exact process varies from company to company.

At GrantTree staff first gather information about what others are paid elsewhere for roles similar to their own, Cecilia told BBC Radio 5 Live's Wake Up To Money, in other words how much the firm would have to spend to replace them.

Then they look at how much the company can afford to pay them, and think about how much they have grown as individuals since they first started.

"Based on this data you make a proposal that is reviewed by colleagues," says Cecilia.

"This is quite important, because colleagues are not there to say yes or no, or to approve it. They are there to ask questions and give you some feedback.

After that feedback the employee decides on a figure.

"The key point is that nobody has to prove it; once you make a decision that pay now happens," she says.

Cecilia says that two members of staff at GrantTree actually chose to voluntarily reduce their pay after their responsibilities changed. 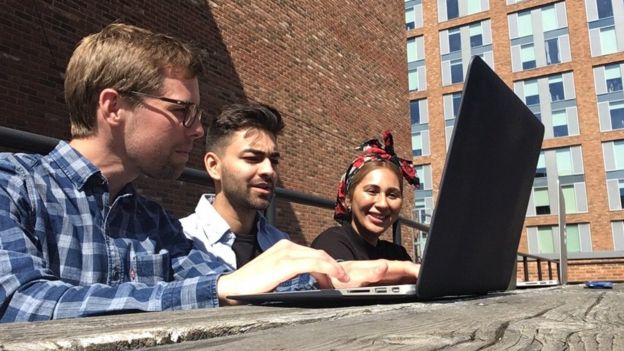 Colleagues at GrantTree help each other review how much they're worth

Most companies operating pick-your-own pay schemes have some sort of check, whether that's scrutiny from colleagues or an upper limit on the total salaries paid out.

The human resources professionals organisation, the CIPD, told the BBC that this way of working can increase pay transparency.

However, it warned the strategy could also backfire without careful implementation, just as unlimited holiday meant some staff actually took less time off than before.

For Charles Towers-Clark, the boss of software firm Pod Group, the system seems to work smoothly.

His 45 employees have chosen their own pay for two years now, leading to a 10% increase in total salaries paid and a huge increase in staff retention.

If someone at Pod Group wants to increase their salary, they tell the HR director who appoints six staff to provide feedback.

Occasionally staff have asked for far more than the market rate, he admits.

"It's not people being greedy, it's a lack of understanding," he says.

"It was her decision but I told her: 'you can take it but if you become uneconomical or your value is not justified then that will only end one way'.

"She reduced what she was asking for after that."

Tom Hardman is chief operating officer for Smarkets, where 120 staff set their own salaries. Like Pod Group, they share data and company information with staff to ensure their salary requests are informed and reasonable.

"A very important part of the salary process is making sure employees understand budgets need to be adhered to," he explains. 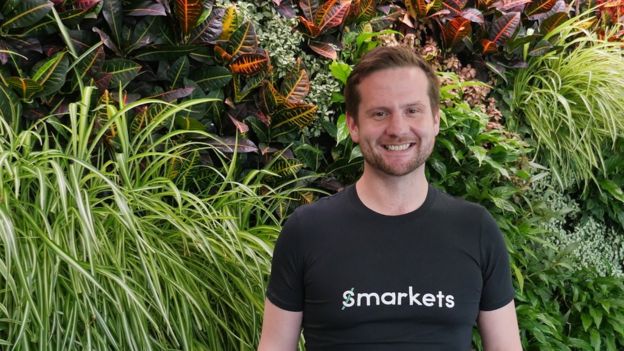 "So as part of any salary process we have a discussion about what resources are available, what cash we have in the bank and how much we can afford to spend on salaries.

"As long as we bring people along on that discussion we tend to find that people are very responsible when given this power."

At the moment, the trend for allowing employees to set their own pay is limited to just a handful of companies, mostly in the tech sector.

But if it is a success, then it could spread, helping to end the traditional workplace taboo against discussing your salary with colleagues.

Certainly for Cecilia, this method of setting pay has transformed her relationship with her co-workers, making it more open and less adversarial.

"The colleagues who give you feedback make sure you are not underselling yourself and that you are getting rewarded for as much as you are worth.

"That doesn't really happen in a normal company where you negotiate for your salary and you are trying to get as much as you can but the other person is trying to give you as little as possible."

Now is the time to set yourself up

NPA has not shut down our filling station
Previous Item
NEXT