Are electric cars as 'green' as you think?

Tesla's chief executive, Elon Musk, has said Berlin will be the site of its first European factory as the carmaker's expansion plans power ahead.

Tesla previously said it aimed to start production in Europe in 2021.

The moves come as the firm, which has also invested heavily in a Chinese factory, faces intensifying competition in the electric vehicle industry.

Mr Musk made the announcement at an awards ceremony in Germany on Tuesday.

"Everyone knows that German engineering is outstanding and that's part of the reason we are locating our Gigafactory Europe in Germany," he said.

Mr Musk also cited risks surrounding the UK's exit from the EU for his decision, according to AutoExpress.

"Brexit [uncertainty] made it too risky to put a Gigafactory in the UK," he told the trade magazine.

Mr Musk said the facility would be located near the new Berlin airport and later gave more details on what the factory would produce on Twitter.

The focus on Germany comes amid rising appetite for electric cars in Europe.

Over the coming years, the biggest electric car production plants will be in Germany, France, Spain and Italy, industry analysis showed.

Some 16 large-scale lithium-ion battery cell plants are confirmed or due to begin operations in Europe by 2023.

Elon Musk has long been pondering where to put his European facility known as a "gigafactory".

Mr Musks's announcement on Tuesday night came ahead of the Prime Minister giving a televised election speech from an electric car factory. It has long been an aim of government policy to attract such a gigafactory to the UK, but international investors are yet to bite.

The disruption of a possible no-deal Brexit has weighed down industry investment. But even the current deal proposed by the government would involve checks for customs and the origin of parts, that are particularly difficult for the car industry and electric car industry in particular.

While Mr Musk in 2014 expressed a long term desire to open a UK factory, that wasn't expected this soon. However, industry sources had been more hopeful that Mr Musk would choose the UK for his research and development facility in the UK. That too will be situated in Germany.

Tesla's European plan comes as the carmaker also moves ahead with a $2bn (£1.6bn) factory in Shanghai.

The firm is looking to ramp up production in China, the world's biggest car market, where sales have been hurt by tariffs triggered by the US-China trade war.

The Shanghai facility will produce Model 3 and Model Y cars. The automaker reportedly showed off its new China-made vehicles to local media this week. 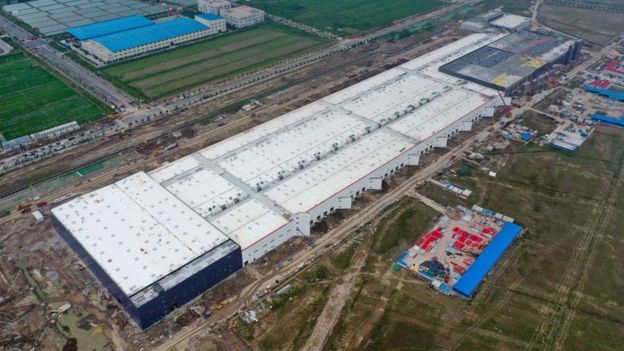 Still, Tesla has struggled with years of losses, fuelling investor doubts and casting a shadow over its shares in recent years.

The firm has yet to turn an annual profit, although it recorded positive results in the final two quarters of 2018.

CIB act to be operational by June

Ekumfi chalk factory to be commissioned