Edwin Lane portrayed himself as an expert pasta cook

My latest Instagram post has been live for less than an hour, and already it's been liked more than 1,000 times.

I'm quite proud of the photo - it's the pasta I had for lunch - penne with a lentil ragu - taken from above with a filter, and it's now easily my most popular Instagram post of all time. 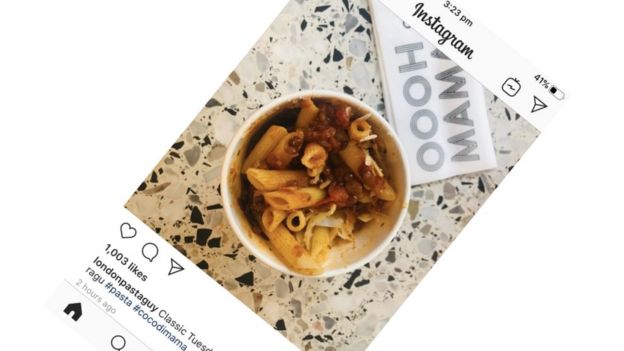 A picture of Edwin's lunch with more than 1,000 likes

I got the fake likes from a guy called Dries Depoorter - an artist from Belgium who makes technology-based art.

His latest installation is called Quick Fix - a vending machine that dispenses Instagram likes and followers direct to your account for a couple of euros a time.

"What you should learn from this is that the numbers on your screen are not always real."

Dries is creating the fake accounts and likes as part of his modern art - he isn't doing it for the money. But plenty of other people are.

Across the internet there is a thriving industry in fake Instagram popularity. 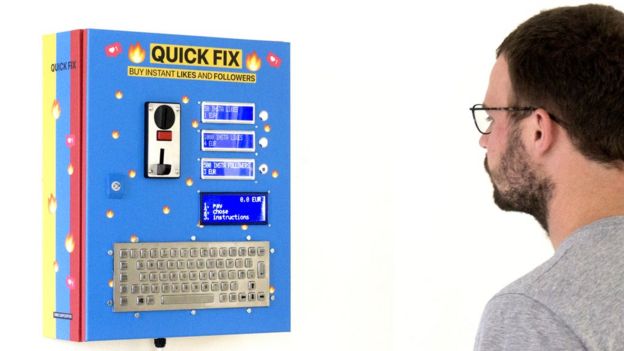 A quick search on Google brings up dozens of sites offering as many followers and likes as you are prepared to pay for.

And that's a problem for the multi-billion dollar industry in influencer marketing that has exploded on platforms like Instagram in recent years.

Major brands now pay influential "instagrammers" huge sums to promote products to their followers in an industry estimated to be worth billions of dollars a year.

The question is whether they're wasting their money if some of those followers aren't real.

"We found that 20-30% of influencers will be artificially inflating their metrics in some way, shape or form, whether that be buying fake followers, fake likes, comments or even story views," says Andrew Hogue, a researcher and developer of IG Audit - an online tool used to estimate the number of fake followers on Instagram profiles.

Make me an influencer

I discovered the world of Instagram fakers when I tried to become an Instagram influencer myself for Business Daily on the BBC World Service.

For advice I went to Harry Hugo, co-founder of Goat, an influencer marketing agency in London that matches brands with influencers.

Influencers with millions of followers can command tens of thousands of dollars for a single post, but even those with smaller followings in niche markets claim to make a living out of it - I wanted to see how easy it would be.

Harry's advice is to find a niche market and theme all my posts around it.

Going through my existing Instagram account we decide to focus on pasta. I like eating it, I like making it at home, and Harry tells me it could be an attractive niche for food brands.

So I set up a new account, @londonpastaguy, and start posting. 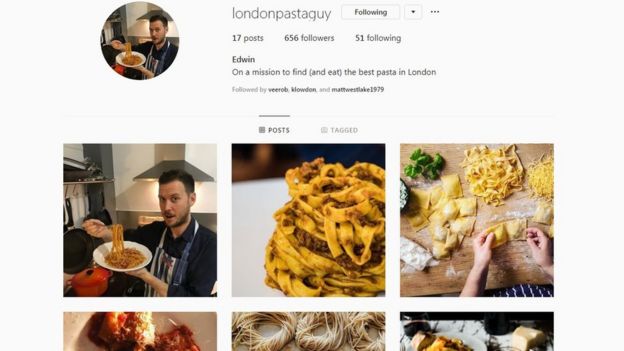 At first I saw some modest progress - a few likes from others in the Instagram pasta community, and sympathetic follows from friends and colleagues.

But it was painfully slow.

But for those who don't want to put in the hours there are plenty of shortcuts available.

I paid with a credit card, and a few minutes later my phone lit up with endless notifications of new followers - 500 almost immediately, and another 300 gradually over the next few days.

The fake profiles are relatively easy to spot. The names are computer generated and the profile pictures are generic. 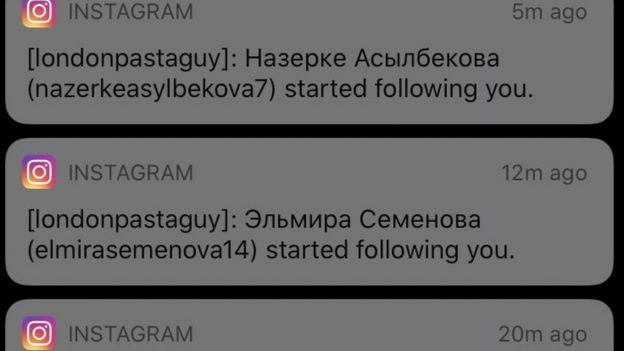 Edwin's phone lit up with hundreds of new followers in minutes

There are online tools like Andrew Hogue's IG Audit that use algorithms to weed them out.

But Mr Hogue says the fakery is becoming more sophisticated.

Services now offer access to "engagement pods" - groups of influencers who like and comment on each others' posts in order to make them look more popular.

At least one website offers to automate this process for a monthly fee. So even if the profiles are real, the comments are computer-generated fakes.

Buying or selling fake profiles is in breach of Instagram's terms and conditions.

I asked Instagram what proportion of profiles they estimated were fake, but they didn't tell me. They do say they use technology to block millions of accounts and will continue to identify and remove fake followers, likes and comments.

But the persistence of fake profiles is a challenge to the influencer marketing model.

Influencer marketing is no longer a fringe business - this year cosmetics giant Este Lauder said it plans to spend three-quarters of its marketing budget on social media influencers.

Andrew Hogue says the problem of fakery needs to be addressed for that growth to continue. "It's just the sign of an industry that has yet to evolve.

"What's at stake is that brands are being ripped off right now. If somewhere between 20-30% of influencers are inflating their stats, that's like a 30% chance that when you invest in an influencer its a total dud.

"That's not fair to the brands or the influencers - the ones that are doing it for real should be paid their fair share."

The accompanying two Business Daily radio programmes on this story are available via the BBC Sounds website and app, by clicking here for part one and here for part two.

Primark presses ahead with new stores

How to buy an Instagram following
Previous Item
NEXT