Pressure is building on Amazon and other delivery firms to improve protections for workers worried about getting infected with coronavirus.

Some US workers at Amazon and US food delivery firm Instacart are threatening strikes, and have accused the firms of not providing proper protections.

US senators have also written to Amazon boss Jeff Bezos to express concerns.

The companies have said they are taking extra precautions, amid booming demand for delivery services due to the virus.

"We are going to great lengths to keep the buildings extremely clean and help employees practice important precautions such as social distancing and other measures", an Amazon spokesman said in a statement.

"Those who don't want to work are welcome to use paid and unpaid time off options and we support them in doing so".

Amazon said it had adjusted its practices, including increasing cleaning of its facilities and introducing staggered shift and break times. 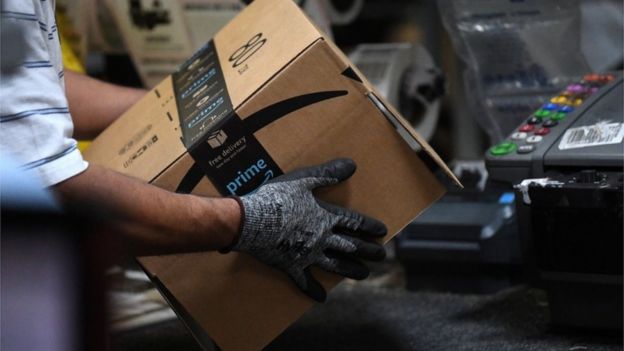 Amazon wants to hire 100,000 more warehouse workers in the US

Mr Bezos earlier this month addressed the worries in an open letter to staff, thanking them for their work.

The company, which is looking to hire 100,000 more warehouse workers in the US to help address the surge in orders, has also said it would boost pay for warehouse staff around the world, including $2 per hour in the US and £2 per hour in the UK, where staff have been told to work overtime.

However, US lawmakers have questioned Amazon over reports of shortages of protective and cleaning supplies, as well as its sick leave policies.

The firm earlier faced strikes by workers in France and Italy and has been hit by legal complaints over the issues in Spain, according to a global alliance of unions coordinated by UNI Global Union.

Monday's call for a strike against Instacart was organised by the Instacart Shoppers and Gig Workers collective, which had accused the company of profiting by putting people making its deliveries "directly in harm's way".

The organisation said the firm should provide protective gear, offer hazard pay and extend the pay for those unable to work because of the virus, whether due to a required quarantine or pre-existing condition.

"This is an extraordinary time in history, and as Shoppers, those of us who are able - and have the means to protect ourselves - do want to help those in our community by delivery groceries and supplies," the organisers wrote.

"But with Instacart neglecting the basic wellbeing of its 150,000+ drivers, we believe there is no choice but to not only walk off but to raise awareness to the company's practices."

What do I need to know about the coronavirus?

Despite the threat of a walkout, Instacart on Monday said it had seen "absolutely no impact" on operations, with more people picking and delivering groceries for its platform than ever before. It said it respected the right of shoppers to provide feedback.

On Sunday, after the call about Monday's strike, Instacart said it was working with a manufacturer to produce its own hand sanitiser and changing its tip policy. It had earlier said it would pay bonuses and provide 14 days of sick leave for its shoppers or part-time employees diagnosed with the virus or placed under isolation orders.

"We are immensely grateful to the entire shopper community for continually stepping up as household heroes for families who are relying on Instacart now more than ever," the firm said.

"We are continuing to monitor this situation and working around the clock to make sure we're providing you with the resources and support you need."

Coronavirus: Why are planes still flying?
Next Item