Coronavirus has halted many global deliveries

Globalisation has been one of the buzzwords of the past 25 years.

It may seem a rather strange concept, since any economic historian will tell you that people have been trading across vast distances for centuries, if not millennia.

You only have to look at the medieval spice trade, or the East India Company, to know that. But globalisation is really about the scale and speed of international business, which has exploded in the past few decades to unprecedented levels.

Easier travel, the world wide web, the end of the Cold War, trade deals, and new, rapidly developing economies, have all combined to create a system that is much more dependent now on what is happening on the other side of the world than it ever was.

Which is why the spread of coronavirus, or Covid-19 to be specific, has had such an immediate economic effect. 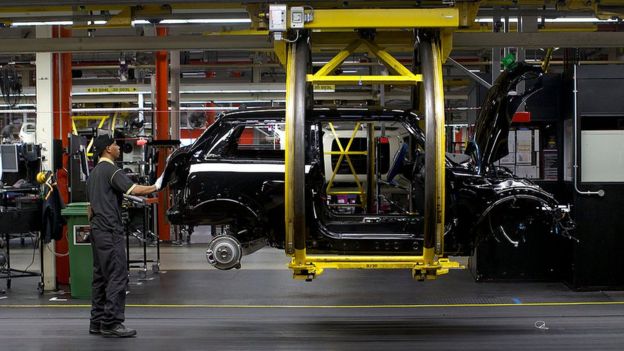 Car factories around the world have stopped production

Professor Beata Javorcik, chief economist at the European Bank for Reconstruction and Development, says that the pace of change in the global economy over just the past 17 years has been profound.

"When we look back at 2003, at the Sars epidemic, China accounted for 4% of global output," she says. "Now China accounts for four times as much, 16%. So that means that whatever is happening in China affects the world to a much larger extent."

Globalisation helps to explain while nearly every major car plant in the UK has shut down - they are dependent on sales and components from around the world. When both collapsed, they just stopped making cars.

China's wealth and health therefore matter to us all far more than they used to, but this is not just a matter of scale - there is also a deeper problem with globalisation.

Ian Goldin, professor of globalisation and development at Oxford University, and author of "The Butterfly Defect, How Globalization Creates Systemic Risks, And What To Do About It", says that "risks have been allowed to fester, they are the underbelly of globalisation".

That, he says, can be seen not only in this crisis, but also in the credit crunch and banking crisis of 2008, and the vulnerability of the internet to cyber-attacks. The new global economic system brings huge benefits, but also huge risks.

While it has helped raise incomes, rapidly develop economies and lift millions out of poverty; that has come at the increased risk of contagion, be it financial or medical.

So what does this latest crisis mean for globalisation?

For Prof Richard Portes, professor of economics at London Business School, it seems obvious that things will have to change, because firms and people have now realised what risks they had been taking.

"Look at trade," he explains. "Once supply chains were disrupted [by coronavirus], people started looking for alternative suppliers at home, even if they were more expensive.

"If people find domestic suppliers, they will stick with them… because of those perceived risks."

Professor Javorcik agrees, and believes a combination of factors will mean Western manufacturing industry will start bringing work back home, or re-shoring it as it is called.

"I think that the trade war [mainly between the US and China], combined with the Coronavirus epidemic, will lead companies to actually take re-shoring seriously," she says.

"They will re-shore activities that can be automated, because re-shoring brings certainty. You do not have to worry about your national trade policy, and it also gives you an opportunity to diversify your supplier base."

However, this is not all good news for Western economies, which may now believe they have become too dependent on globalisation. Instead this cuts both ways.

A great deal of globalisation is not about moving manufactured goods around the world, but moving people, ideas and information; something that we in the UK and other Western economies are very good at.

As David Henig, director of the UK Trade Policy Project at the European Centre for International Political Economy, points out: "The service sector must have fallen off a cliff, and just look [in particular] at tourism and universities.

"There must be real concern about the number of new entries to Western universities this autumn. This is a huge export industry… many universities are dependent on Chinese students, for example." 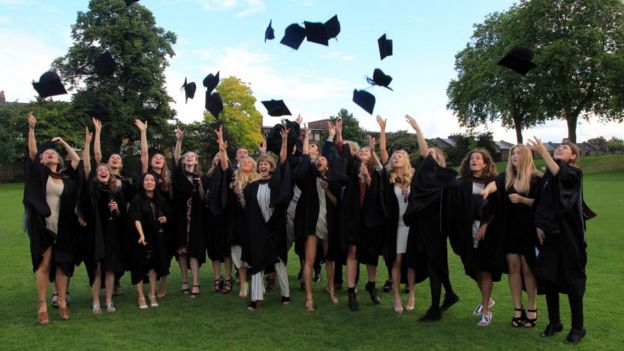 Many universities in the West would miss overseas students, who often have to pay more for their courses, and are a key income stream

The idea that globalisation is just about moving manufacturing or supply chains to cheaper Asian countries is too simple. It has also led to massive increases in foreign students willing to pay to study at our colleges and universities, and a huge influx of wealthy tourists who want to spend money here, to name just two service sector businesses.

Slowing or even reversing globalisation would hit those industries very hard indeed. But even so, Prof Goldin thinks that this pandemic marks a sea change and that "2019 was the year of peak supply chain fragmentation".

Although, some factors such as 3D printing, automation, the demand for customisation, and quick delivery, as well as protectionism were already being felt; it seems that Covid-19 can only accelerate that process.

The real concern is, however, not whether these changes happen, but how far they go, and how they will be managed?

We could, like after 1918, get weak or weaker international organisations, the rise of nationalism, protectionism and economic depression. Or, as followed 1945, more cooperation and internationalism, like Bretton Woods, the Marshall Plan, the UN and the General Agreement on Tariffs and Trade. 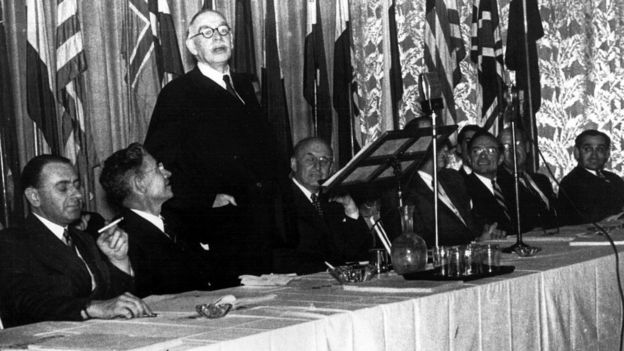 There was much optimism that the world would become a better place after World War Two, with the Bretton Woods conference, pictured, aiming to ensure a fairer economic order

Prof Goldin remains cheerful, but worries about who is going to take the lead. "We can be optimistic, but we are not seeing leadership out of the White House certainly," he says. "China can't step up to the plate, and Great Britain cannot lead in Europe."

This is a worry shared by Prof Portes, who points out that: "The London G20 Summit of 2009 agreed a $1tn (£800bn) package of international cooperation, even Germany joined in. But now there is no leadership in the G20, and the USA is absent from the international scene."

Will globalisation be reversed? Probably not, it is too important an economic development for that to happen, but it could well be slowed down.

The bigger question is, however, have we learnt the lessons of this crisis? Will we learn to spot, control and regulate the risks that seem to be an integral part of globalisation? Because the cooperation and leadership necessary to make that happen seem to be in short supply.

The man who sells 700mn sandwiches a year

Oil Prices rise on hopes of a truce
Previous Item
NEXT