Ed met 12-year-old Peaches on his trip to Liberia

Ed Sheeran writes exclusively for BBC News about his trip to Liberia with Comic Relief and why he'll never forget the children he met there - and one young girl in particular.

I knew I wanted to get involved in Red Nose Day this year. But then I decided to take it one step further.

I'd wanted to go on a Comic Relief trip for years and here was the perfect opportunity, so I agreed to take my first ever trip to Liberia in West Africa.

During the trip, we visited a school in West Point, the largest and most dangerous slum in Liberia's capital, Monrovia.

It was really shocking seeing the appalling conditions that people live in and it was far worse than I could have ever imagined.

Nothing could have prepared me for what I saw, but despite all of this, everyone's positivity was overwhelming. 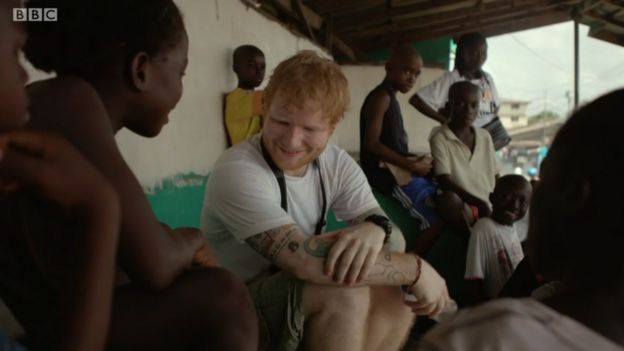 Ed says the local children were fascinated by his tattoos

The welcome from the kids was amazing, especially when they saw my tattoos; they went nuts and couldn't understand what they were.

Some of the younger kids tried to wipe them off. Everyone wanted to know what we were doing and where we were from.

They absolutely loved singing and clapping along to my songs and for a few hours it was easy to forget that these kids live in such awful conditions.

I was completely blown away by their eagerness to learn. They really wanted to be in school and all had big dreams for the future.

Despite living in one of the poorest places on Earth, they weren't prepared to let their circumstances hold them back. 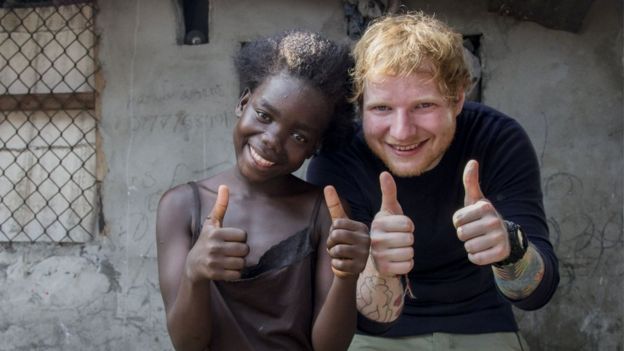 Ed spoke to Peaches during a break in filming

I asked a lot of them what they wanted to be when they grow up and "doctor", "teacher" and "politician" were common responses. I got a sense that they really meant it.

They've seen what life is like for people with no qualifications or jobs and it's the motivation they need to keep studying.

There are hundreds of thousands of people crammed in to West Point, most of them living in squalor, so getting an education is a privilege and not something all of the kids get to do.

As we were taking a break from filming, a little girl came over to talk to me. Her name was Peaches and unlike the other children I'd met, she wasn't in a uniform. 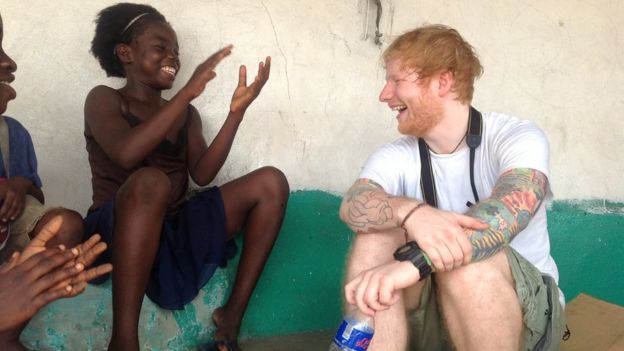 She explained that since her father's death during the Ebola crisis, her mother couldn't afford to send her to school any more.

At just 12 years old, she had already been working for over a year helping to support her family. Unfortunately, Peaches' story is not uncommon.

We had an impromptu jamming session and the girl could really sing. Peaches sang a song that reminded her of her father and as she did, tears started to roll down her face.

The enthusiasm that was initially shining out of her disappeared.

It was at this point that the reality of Peaches' situation, and many, many kids just like her, hit me really hard. 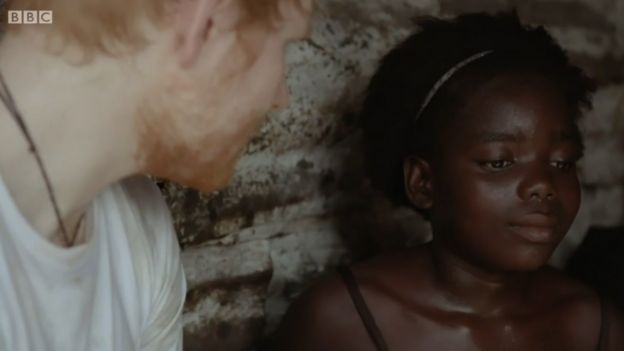 Peaches told me she wanted to be a musician when she grows up, and who knows, maybe she can make that happen, but for now, she has been forced to drop out of school and spends her days working in a filthy, dangerous slum, earning what she can to help feed her family.

It is because of kids like Peaches and the thousands more like her across Africa that I am relieved that Red Nose Day exists.

West Point is like a forgotten world, shut away from the rest of the civilisation, yet the money you raise in the UK is helping the kids that live there.

So many of them don't have a childhood the way you or I would recognise it: they struggle every day just to survive.

During my trip I got to visit a project that's using Comic Relief cash to help abandoned children and those not in school across Liberia.

Because of public donations, many children will be able to go back to school and get an education. For a lot of them this is their only chance of a better future and a life outside of the slum. 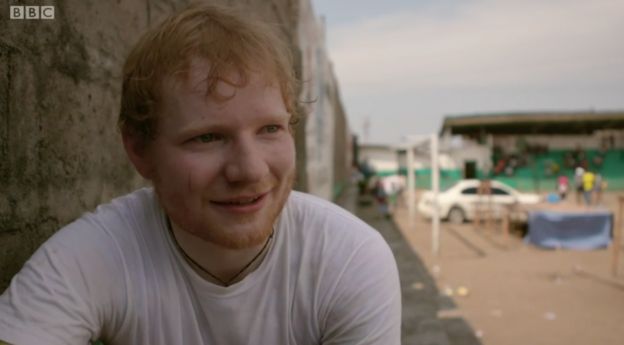 Ed was moved to tears on his trip

I've no doubt that with the right opportunities Peaches absolutely could be a singer, or a teacher, or she could very well end up running the country.

Just a small amount of money can make such a big difference in a place like West Point and at least gives these kids a fighting chance. I know this because I've seen it with my own eyes.

Just £45 could be life-changing to someone like Peaches, it could pay for a child in Liberia to go to school for a whole year.

I really hope the money we raise this Red Nose Day can help thousands of children, just like Peaches, to follow their dreams.

Red Nose Day 2017 airs at 19:00 GMT on BBC One on Friday, and will show more from Ed's trip to Liberia. Find out more about Red Nose Day.

James Barnor’s photos on show in Accra
Previous Item
NEXT