Avengers: Endgame and Game Of Thrones were named best in class at the MTV Movie & TV Awards on Monday night.

Lady Gaga won best performance in a movie for her role in A Star Is Born, while Elisabeth Moss won the TV equivalent for The Handmaid's Tale.

The awards have not split the acting categories by gender since 2017.

Endgame, which was released released in April, has been a huge commercial success and is second only to Avatar in the list of highest-grossing films ever.

Anthony Russo, who directed the film with his brother, Joe, accepted the prize for best film after seeing off competition from BlacKkKlansman, Spider-Man: Into the Spider-Verse, To All the Boys I've Loved Before and Us.

He said: "A movie like this one is only possible because it's been built on the shoulders of so much great work, so many talented artists and storytellers stretching back decades and generations now.

"All the way back to its origins with the late, great Stan Lee.

Despite mixed reactions to Game Of Thrones' eighth and final season earlier this year, it won best show ahead of Riverdale and The Haunting Of Hill House.

Here's a round-up of what else went down at the ceremony:

'Hollywood was going to conform to me' 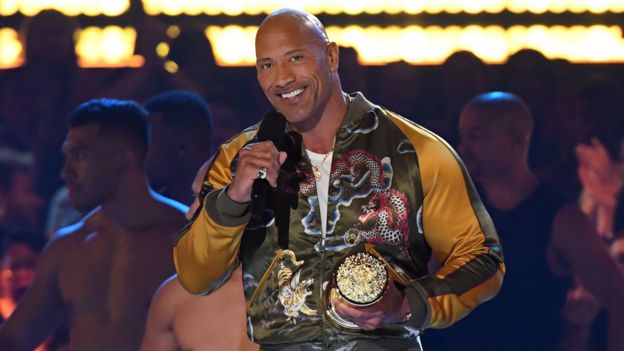 Dwayne 'The Rock' Johnson reflected on his early career in Hollywood as he was honoured with the generation award.

The 47-year-old professional wrestler-turned-actor, who played his first leading role in 2002 action movie The Scorpion King, said when he first arrived in Hollywood, the film industry "didn't know what the hell to do with me".

The father-of-three entered the stage at the Barker Hangar to the tune of Queen's We Will Rock You and opened his acceptance speech by telling fans "the most powerful thing that we can be is ourselves".

Johnson said he took the advice for his first few years in Hollywood, which left him "miserable".

"So Hollywood conformed to me and here I am with all of you receiving the generation award."

The actor, who will reprise his role as Luke Hobbs from the Fast And The Furious movies in spin-off Hobbs & Shaw alongside Jason Statham later this year, finished his acceptance speech by saying: "It's nice to be important but it's more important to be nice."

Doing it for the kids 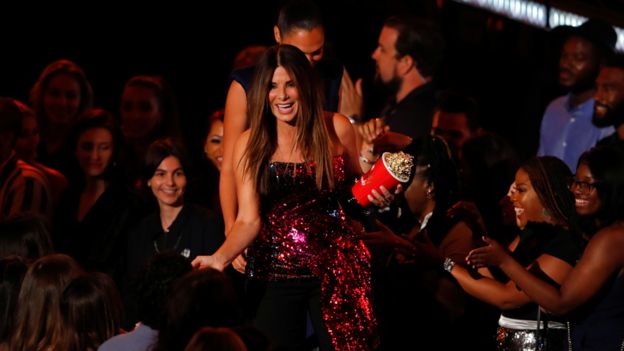 Sandra Bullock was the first big winner of the night, taking home the prize for most frightened performance for her role in Netflix horror Bird Box.

After being released on 21 December, Netflix said Bird Box had been viewed by 45 million accounts in its first week, making it the most-watched film within the first seven days on the platform.

The movie featured Bullock trying to protect her two children from supernatural monsters who make people go insane by locking eyes with them.

It sparked a wave of internet memes thanks to the sight of Oscar-winner Bullock wearing a blindfold and the British Transport Police had to investigate YouTube footage of pranksters doing the 'Bird Box challenge'.

Netflix was forced to issue a message telling fans not to take part in the challenge.

In her acceptance speech, Bullock, explained she took part in the film for her son Louis, nine, and seven-year-old daughter Laila.

She said: "I made Bird Box because my children asked me why I never made anything for them.

"So when Bird Box crossed my path, I knew this was a story I needed to make because it was about family.

"And when I finished the film, I went to my babies and said 'here, mommy made this for you and even though you can't see it until you're 21, because apparently a movie about being a mommy is a horror film, you will know when you see it there isn't anything I wouldn't do for you'."

The Oscar winner said her children were her "first thought in the morning" and her "last thought at night".

She added: "I was put on this Earth to protect you. You are my world. I love you so much. I will move mountains to make sure that you are safe."

Shouting out the stunt performers 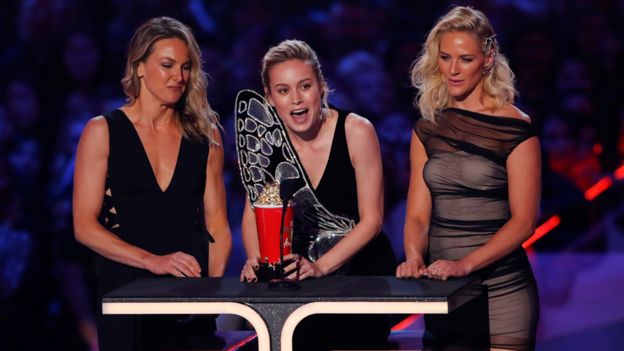 Captain Marvel actress Brie Larsson invited Renae Moneymaker and Joanna Bennett on to the stage in Santa Monica, California, to accept best fight in recognition of the her character's battle with Minn-Erva.

After thanking MTV for the prize, Larson said: "But I wanted to take this moment to really say thank you to the two women that are standing here beside me.

"These are the women who trained me and were also the stunt doubles for Captain Marvel.

"I could not have made this film without them. They are really the baseline for who she is. They are the living embodiment of Captain Marvel."

Taking the mic, Bennett said: "It was such an honour to work on this film and be part of bringing such a strong female character to life and to be able to do it together was just such a special experience for all of us."

Moneymaker added: "Joanna and I actually grew up together. As young girls, we wanted to be just like Lara Croft and GI Jane, so it's a real honour to be a part of this character and hopefully pass along some of that inspiration and strength that those iconic women brought to us."

To get into shape for the film, Larson embarked on a gruelling regime of intensive weight training, as well as taekwondo, judo and boxing, which left her able to deadlift 225lb and push a Jeep.

Most meme-able moment - Colton Underwood jumps the fence (The Bachelor)

Best performance in a movie - Lady Gaga (A Star Is Born)

Best performance in a show - Elisabeth Moss (The Handmaid's Tale)

Breakthrough performance - Noah Centineo (To All The Boys I've Loved Before)

Weinstein : From studio to courtroom

Adele to release album in Sept

Kofi B's funeral to be held on April 25

Taylor Swift: Making up with Katy Perry
Next Item