How Stranger Things spawned an entire album of Stranger Songs

On a scale of one to 10, Ingrid Michaelson's new record Stranger Songs is an Eleven.

The US singer-songwriter is best known for such intimate indie-pop ballads as The Way I Am and Be OK.

But she's also a Stranger Things superfan who's tapped into the sci-fi show's storyline, soundtrack and characters - including Millie Bobbie Brown's psychokinetic teenager, known only as Eleven - to inspire her ninth record.

"It's funny when you allow another piece of art to totally invade your brain in this way," says the New York native.

"Like, I love Game Of Thrones. I know everything about Game of Thrones. But would I write a record about it? I don't think so.

"It doesn't call to me in the way this show does."

Spoiler alert - plot details from the first series of Stranger Things are revealed below.

Michaelson's connection to the Netflix show stems from a moment in the first series where Winona Ryder's character is trying to communicate with her abducted son.

(As fans will know, Will Byers spent much of that debut season trapped in a parallel dimension known as the Upside Down.)

Convinced Will can "speak" to her by making lights blink, Ryder's Joyce strings a set of Christmas tree lights across the wall, painting letters under each one.

This allows her son to send messages through the ether, Ouija board-style. 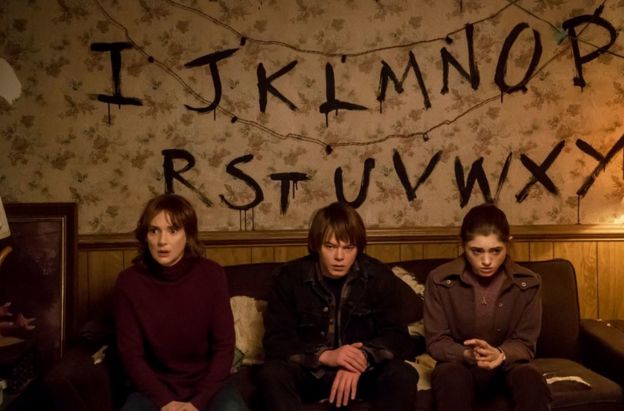 The first series of the Netflix show is set in 1983

"I lost both my parents in the last five years and there was something really moving to me about the idea of talking to somebody through Christmas lights," says Michaelson.

"Winona Ryder's character is just so desperate to find her son, and she does a beautiful job portraying that character.

"I just felt like a big theme of the show is motherhood, and what you would do for your children."

While sitting on an airplane, Ingrid was moved to turn the scene into a poem she sent to her boyfriend, the actor Will Chase.

"And then I thought, 'If I'm moved to write poems about this concept, maybe I should turn them into lyrics and maybe this should be a record.'"

Michaelson chose to focus on the programme's universal themes of first love and teenage isolation, rather than its interest in monsters and mind control.

Listen to throbbing pop anthem Missing You without any context and it can be interpreted as a song about yearning for an ex.

Discovering it's really about the love triangle between the show's Nancy, Steve and Jonathan characters just provides an added frisson for fans.

But Stranger Songs is not just inspired by the plotlines of Stranger Things, the third season of which premiered earlier this month.

Over its 11 tracks (the number is no coincidence), Michaelson delves into the series' radical '80s soundtrack, channelling Cyndi Lauper's ebullient pop on Young and in Love and Foreigner's soft rock stylings on Hey Kid.

"We listened to a lot of Whitney Houston and Yazoo," says the singer. "But we would also have the show running quietly in the background, so a lot of the score seeped into our brains."

It's a long way from the ukulele ballads of Michaelson's early albums. Yet those simmering '80s synths are a perfect framing device for her star-crossed love songs.

She credits co-writers Sam de Jong (Muse, Marina and the Diamonds), Katie Herzig and Alex Hope (Years & Years, Troye Sivan) for helping her "lean into the nostalgia" without "hitting you over the head with '80s sounds".

But learning to accept help has been a long process. "When I was younger, I had more of a feeling of ownership over my music," she says. "I didn't want to share it.

"And just to be honest, I feel like the older I get, the more I struggle with trying to find something I haven't already said.

"So it's great to have a fresh mind in the room with me, somebody who can turn your head, or divert you from where you'd normally go." 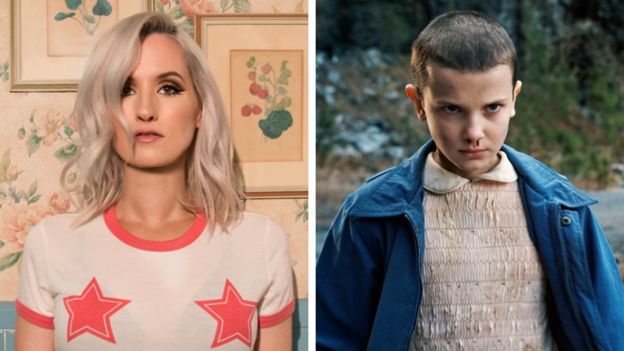 Michaelson says she was surprised how easily the show's themes of family, loss and angst intertwined with her own life

Michaelson admits she was "hell-bent against" such collaboration, but had a change of heart while working on her 2014 album Lights Out.

"I needed the help," she tells the BBC. "I felt really burned out. I knew what I wanted to say, but I didn't want to say it in the same way.

"So I jumped into co-writes with some people I really trusted and it was such a delightful experience, I became in favour of it.

"On this last record I would walk into a room with people I'd never met and walk out with a song. It was crazy."

If you think she sounds slightly in awe, you'd be right. "These people are like machines," she says.

"They just come up with hooks and melodies and ideas like it's their job. Well, it is their job, but it's so impressive."

In the studio, Michaelson insisted her collaborators stuck to a "list of rules" she'd set for the album, making sure it stayed faithful to Stranger Things' storylines.

Except for one song, that is. Track seven, entitled Best Friend, is a thirst-quenching piece of fan service that imagines a romantic attraction between Nancy and her best friend Barb.

Barb's time on the show was cruelly cut short when she devoured by the Demogorgon during season one.

"It's basically a fan fiction song," laughs the singer. "It felt to me like Barb was really in love with Nancy and basically lost her life because she was protecting Nancy.

"There's a lot of theories about it on the internet too. I thought the idea of giving her a bit more of a back story was nice, because she didn't get it on the show."

Stranger Things' creators approve of Michaelson's album and have even let her use the show's typeface on the record sleeve.

Yet the project was written, recorded and released before the third season premiered. Is Ingrid preparing an EP to keep listeners up to date with latest developments?

"If I was very ambitious… maybe!" she says. "I'll probably see how this one goes first, but I might be moved to make a part two. Who knows?"

In the meantime, she's working on a Broadway adaptation of The Notebook, the Nicholas Sparks novel filmed with Ryan Gosling and Rachel McAdams in 2004.

The musical recently had its first reading in New York, with a cast including High School Musical's Vanessa Hudgens and Jelani Alladin from the Broadway version of Frozen.

"It's been very moving," says the singer. "I've been working on this for about two-and-a-half years and I've only heard the songs from my own demos, which are not that great.

"So hearing these amazing actors sing these songs... I basically have to have a box of tissues there at every moment."

The young talented contenders at the Grammys

Don't cry for me Portugal - Madonna

6 reasons to book for BizTrendsLIVE!2020

How chimpanzees bond over a movie together
Next Item