Lewis Ludlam sat down last summer to work out his goals for the new season. Number one was to break into the Northampton first team and hopefully "play a few games". If all went well, a new contract at Christmas time, either at Saints or somewhere else.

For Ruaridh McConnochie, it was a case of settling into 15-a-side rugby with Bath after switching from the sevens programme.

Not even England head coach Eddie Jones - a man who has talked for three and a half years about his carefully laid World Cup plans - could have envisaged taking either to the World Cup.

Yet on Monday Jones named the pair in his squad of 31. McConnochie has yet to be capped; Ludlam only made his debut 24 hours earlier. 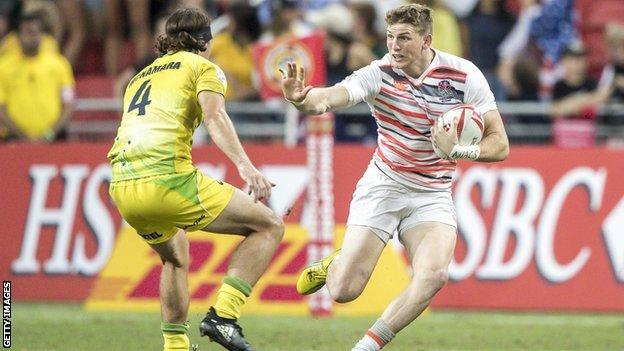 The players - World Cup 'bolters' in the extreme - are still in a state of disbelief.

"It's been bizarre," Ludlam told the Rugby Union Weekly podcast. "This time last year I was fighting for a contract at my club.

"I was picking some of these England guys in my fantasy team a few years ago in sixth form - posing for pictures outside Twickenham with Dan Cole - and now I am going out and playing with them! It's surreal."

McConnochie said: "I would be lying if I said 12 weeks ago I thought I would be here."

Given the premium placed on experience at World Cups - a mantra oft-repeated by Jones himself - these kind of late picks appear risky.

But not according to the England boss, who says bringing in rookies at the 11th hour was always part of the masterplan, with scrum-half Willi Heinz and hooker Jack Singleton also making late charges on to the plane.

"Some players grow, and some players shrink. Both those two boys came into camp and they grew."

Ludlam's route to the top has been convoluted; he only secured a place in the Northampton team last season at the age of 23.

He credits Saints director of rugby Chris Boyd with giving him an opportunity, while Jones also received a glowing character reference from the Kiwi before selecting Ludlam over some Test veterans.

"Chris Boyd gave him a big rap," Jones explained. "We thought we would roll the dice and get him into camp, and each week he just grows a little bit more."

Ludlam added: "[Fellow Northampton flanker] Teimana Harrison had a kid in the Barbarians week and I was invited in to train as cover. Eddie saw me train there and it's just been a whirlwind."

But while Ludlam had represented England age-grade teams in his youth, as a teenager McConnochie was playing for Cranbrook in Kent, in the sixth tier of the English rugby pyramid. At university he represented Nuneaton on the weekends in National Division Three.

"People forget I was superfan until I was 24," he laughed. 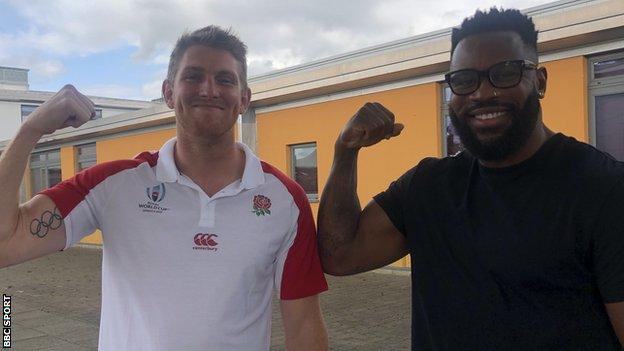 Ruaridh McConnochie has a tattoo of the Olympic rings, which he showed off with Rugby Union Weekly host Ugo Monye

After winning a silver medal at the Rio Olympics in 2016 - the rings tattooed on his right bicep act as a permanent reminder of that achievement - McConnochie was signed by Bath in 2018, capitalising on back-three injuries to make a startling impression in the second half of the season. A shock call-up to the England training squad in June followed.

"It was pretty last minute, and it did take me by surprise," he admitted. "I just wanted to go into each week and live it as a bonus, because it's incredible."

As well as their versatility and talent on the field, both men have impressed away from training with their attitude and character, embodying the "samurai spirit" and zest for life Jones wants from his men in Japan.

And whatever happens come September and October, Ludlam and McConnochie have set an example to sportspeople everywhere that it's never too late.

Eminem criticised for rap about bombing

GoT spinoff to premiere in 2022

I won't stop flaunting my 'assets' - Wendy S
Next Item