A show's sign language interpreter had a "fairytale" moment when her partner proposed following a performance of the musical Grease.

Dana Wartnaby had been signing at The Curve theatre in Leicester when, at the end of the show, the cast brought her to the middle of the stage.

Tom Armstrong, who was in the audience, then joined her and popped the question.

Ms Wartnaby said "yes" in front of an excited audience and cast and crew.

The pair, from Queniborough, Leicestershire, met in 2011 and have two children, so Mr Armstrong was very pleased, to say the least, she had agreed to marry him.

Mr Armstrong, 34, had asked for her father's blessing before getting the theatre's help in setting the proposal up. 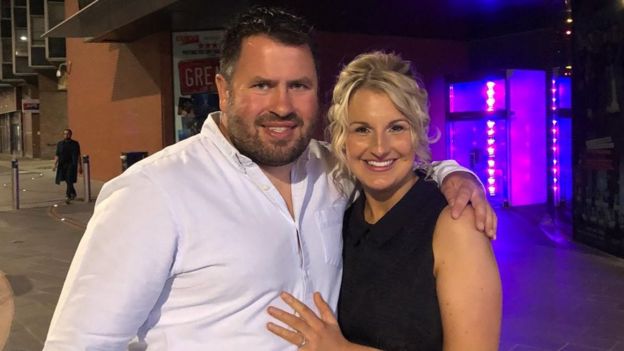 Tom Armstrong and Dana Wartnaby outside the theatre following the proposal

"I was really nervous, shaking, I kept going over my lines sitting in my seat. I had to have a couple of beers in the interval," he said.

Ms Wartnaby, 31, was expecting to walk off stage at the end of the musical when the cast called her to the middle.

"I was even more surprised when he got down on one knee and proposed.

"It was like a fairytale, I couldn't believe it, everyone was so happy around us which made it extra special."

'I wasn't first choice for The Goldfinch role
Next Item