A new film based on the life of Judy Garland has been warmly welcomed at the Toronto Film Festival.

Renee Zellweger plays the titular role in Judy, which is released in the UK next month.

Set in 1968, the film follows Garland as she was battling addiction issues and struggling financially.

"In 15 years at #TIFF I have never seen a standing ovation like the one for Renee Zellweger at Judy," said Variety's Jenelle Riley.

After sustained applause, Zellweger joked: "OK quit it - you're messing up my make-up!"

The film sees Garland launch a residency in London as she tries to get her life and finances back on track. But she was in a fragile state of mind and behaving erratically in the final months of her life - something the film does not shy away from. 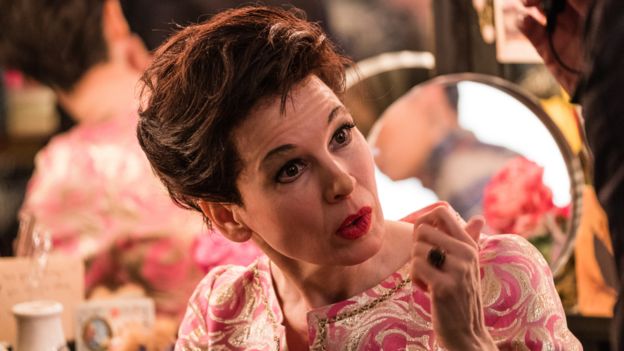 The film features flashbacks to her time filming The Wizard of Oz, which suggest her addiction issues started young and were not helped by those around her.

The audience response in Toronto follows warm reviews for the film from critics and is likely to put Zellweger in the frame for a potential Oscar nomination.

"Her transformation is quite astonishing here, and the extended sequences at the Palladium demonstrate her ability to recreate Garland's physicality and mannerisms," said Fionnuala Halligan in Screen Daily.

"The casting makes bittersweet sense," added Guy Lodge in Variety. "A onetime American sweetheart who relinquished the burdensome title, she plays Garland, with palpable affection and feeling, as one who's been over the rainbow and back again."

Vanity Fair's K Austin Collins said: "Judy isn't visionary or perfect, but it convinces us of its ideas - and it's a fine scaffolding for Zellweger, already a potential awards contender for reasons that seem obvious." 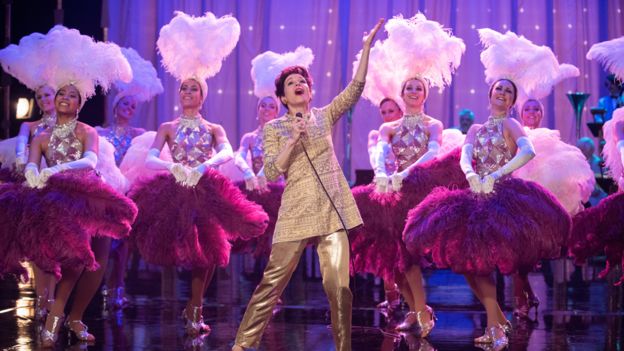 Collins addsed: "What I hope doesn't get lost in the inevitable awards melee - with the way it flattens films and actors into worthy or not, "likely" or not - is a sense of how utterly idiosyncratic Zellweger's performance is."

Zellweger has previously won best supporting actress at the Oscars, for her performance in Cold Mountain in 2004, but she is perhaps better known for her leading roles in the hugely successful Bridget Jones films and Chicago - which won best picture at the 2003 Academy Awards.

British actor Royce Pierreson, who has starred in Murdered By My Boyfriend, Line of Duty and forthcoming Netflix series The Witcher, plays Garland's pianist and musical director in the film.

He told BBC News the cast tried to ignore the weight of expectation on the movie as it was being filmed.

"As it went on, you do hear buzz, and you do hear things from outside, but when you're working on a project, everybody's so focused on it," he said.

"Especially here, there was so much concentration and focus on creating this world and depicting it as truthfully as possible. You kind of forget about everything else.

"It's only when you finish and you're away from it. You look back in hindsight and think Yeah, yeah, actually, that that was as a whole really special experience." 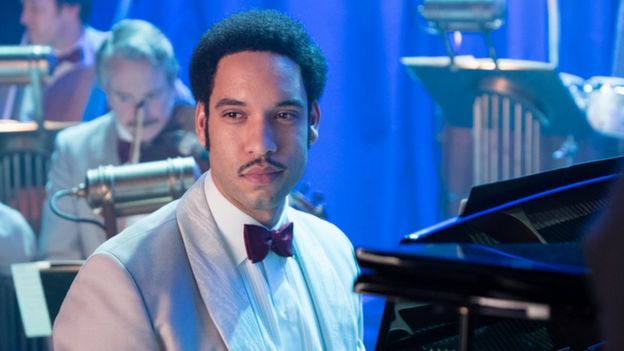 Much press attention has focused on Zellweger and her tendency to stay in character while filming.

The movie's costume designer Jany Temime told Vulture: "Renee was extremely emotionally and artistically involved in Judy. It was her film. I think she really got into Judy's skin."

"We didn't call her Judy on set or anything, but she was pretty much transformed from the time we were called till we wrapped, so I rarely saw her step out," said Finn Wittrock, who plays Garland's fifth and final husband.

"But it was like all the great sides of Judy and none of the diva because she was kind of a social butterfly. The AD [assistant director] would come get her to take her to set, and she would stop five times because she was asking the grip [camera operator] how his dog was. That kind of person."

He added: "She was always in the wig and had a bit of a prosthetic nose and dark contacts. It wasn't till the wrap party that she came out and she was blonde and wearing a stunning dress, and I was like, Oh, right. That's the movie star."

Pierreson agrees, describing Zellweger as the "most inclusive and generous actor" he has ever worked with.

"I was lucky to have a few scenes with her. And we shared quite a lot of screen time together. And she was she was incredibly inclusive.

"When there was something not right, she would / we would find a way to get to that point without without making it untruthful. And I learned a lot from her and she stayed in character all the time I knew her. But she was still incredibly easy to connect with and learn from and ask a question to."