It's been talked about for years and now, finally, Julian Fellowes' hit ITV period drama is transferring to the big screen.

All your favourite characters have returned - get ready for those famous Dame Maggie one-liners - along with a few high-profile new faces, including Imelda Staunton and Killing Eve's David Haig.

The film centres around a visit from the King and Queen, which has got both the Downton household and the village all aflutter.

Reviews have been warm if a little underwhelming, with many publications, including The Telegraph, The Sun, The Guardian and the Daily Mail, giving the film three stars out of five.

Here's everything you need to know about the film - including some gems from the stars' behind the scenes.

(NB: We've tried to avoid big spoilers where possible but bear in mind there may be some plot details below.)

1) Everyone's feeling just a teensy bit nervous about the release

Michelle Dockery, who plays Lady Mary, says her first thought about being on the big screen was: "Our faces are going to be much bigger!

"It's an extension of the show, just turned up a notch. It was important that it didn't feel that different."

Downton creator, Julian Fellowes, agrees: "We wanted people to recognise the series they loved in the film. Our job was to make it more cinematic."

Kevin Doyle, who plays the upwardly mobile Joseph Moseley, says: "It was scary, all of us gathered downstairs in the wine cellar for our first scene - it's rare to come back together as a group of actors after a three-year gap."

Lesley Nicol, who plays everyone's favourite cook Mrs Patmore, adds: "The film is much anticipated, so it's a lot of pressure."

2) Breakfast is the most important meal of the day

"My first day on set was with Michelle and Hugh (Bonneville - Lord Grantham) during a breakfast scene, I was delighted as they make an amazing breakfast on set. One thing myself and Hugh always suffer from is that we actually eat the breakfast and they always do 28 takes. Hugh and I are always like: "Are you going to finish that sausage?" 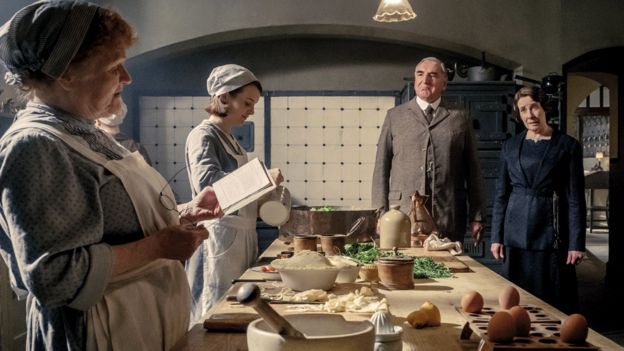 Watch out Mrs Hughes, Carson has been joined by a new leading lady.

She's been married to Jim Carter, who plays Downton's retired butler, for 36 years.

Imelda jokes: "Carson has been coming home every night for many years! I felt at ease but I didn't want to let the side down. I'd have got it in the neck from Carson at night if I hadn't pulled my weight."

Imelda plays the cousin of Lady Violet (Dame Maggie Smith): "I thought I'd be downstairs. I was quite surprised to be upstairs. Jim and I went to work together three days and were quite over-excited! Of course, I would have liked to have been downstairs giving Carson a hard time!

"But I was very happy in the company of Geraldine James (Queen Mary) and Maggie. It was like being with Federer and Nadal upstairs, so it was very nice indeed."

She adds: "We're really good at pretending to cook. But we're terrible!"

Speaking of Sophie's character Daisy, who has been Mrs Patmore's underling since series one, Lesley explains: "Madam's got a bit more gobby! I used to be the dominant character but things have changed round. She's more forthright. The dynamic has changed."

Sophie adds: "They seem more like equals. It's come such a long way. Daisy looks out for Mrs Patmore now. Mrs Patmore is like the mum that gives you a guilt trip, that's why Daisy's still there!"

5) Former PM Theresa May inspired one of the crucial scenes 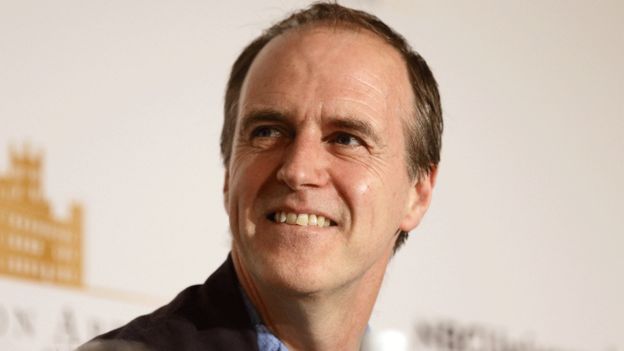 Moseley returns to Downton to serve dinner to the King and Queen. And let's just say, it's a pivotal moment.

Kevin explains: "I knew it was an important scene - the whole downstairs story was building up to that moment so I was nervous. I was glad when it was over and I had a big drink at the end of the day.

"I modelled the bow-curtsey on Theresa May, I saw it and thought, 'I'm going to have that.'"

"The Downton film is so everyone can take two hours off Brexit!" Julian says. 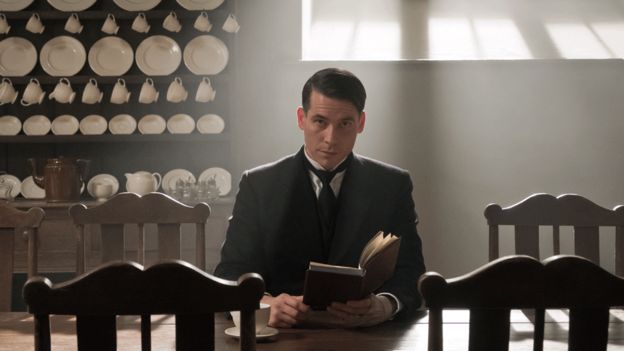 Rob James-Collier, who plays butler Thomas Barrow, says: "You don't have to call her Dame, she tells us to just call her Maggie. She came through the rep system so she's done it the hard way. She's very approachable. She did a charity thing for me called Downton Wars Episode 2: The Butler Strikes Back shot on an iPhone using my son's light sabre!"

We won't give anything away but Michelle has a very moving scene towards the end of the film with Dame Maggie, her granny in the film.

Michelle says: "Any scene with Maggie is a privilege and feels special but that particular one felt very special and emotional. I was very immersed in it and it's a joy to work with her. It was a moment in my career and in my life. I'll never forget it."

Even more importantly, "Maggie's very good at playing Bananagrams", according to Sophie.

Elizabeth McGovern, who plays the Countess of Grantham, says: "There is no such thing as a glorious past. This is entertainment, it's not a documentary. I would never want to go back there.

"Women have come so far. They came from such a place of incarceration compared with what we have now. Playing Cora - she has no rights over her own destiny. I'm always so pleased at the end of the day to be going back to my life now where we are now. There's not one part of me that has a sentimental attachment to that era as a woman."

But there are still some unwanted similarities between past and present.

Phyllis Logan, who stars as housekeeper Elsie Hughes, says: "Back then and continuing today, women can still be subject to unwanted attention. It's a power thing and there's still a bit of that around now but hopefully it's becoming less so."

Elizabeth adds: "Women of my generation, we're amazed by the realisation of what we were expected to accept in the workplace."

Julian Fellowes says: "It was very male-dominated (in the 1920s) but there were just as many intelligent women and they had to find ambitious ways (to get on). That creates a tension. Mary is trying for a balance between being part of her society and doing what she likes. That tension wouldn't exist today.

Jim adds: "We show the 1920s in a romantic light but life would have been hard for the servants. Lord Grantham was the most benign employer. There was no safety net."

9) Peace at last for the warring Crawley sisters 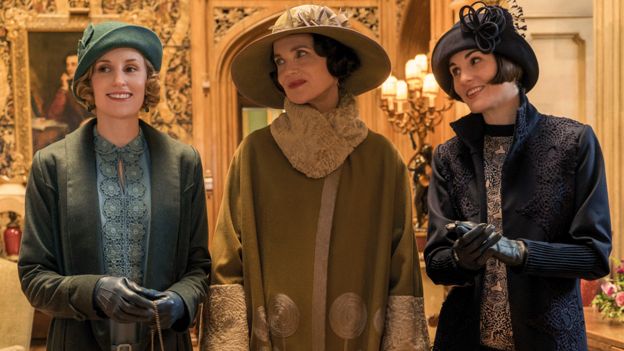 Laura Carmichael, left, told the BBC, she's "generally scruffy in real life". We don't believe a word of it.

Mary and Edith (Laura Carmichael) have been at loggerheads for years, with one of their worst fall-outs occurring in series six when Mary told Edith's then fiancé Bertie about her sister's illegitimate daughter Marigold, out of spite.

But they've both mellowed in the film.

Michelle explains: "Edith and Mary are quite settled now. Edith has moved on and they've evolved.

Laura adds: "Edith's status has changed between the end of the series and the film. (She's now The Marchioness of Hexham.) She outranks everyone.

"Edith and Mary have found an ease with each other."

We hate to admit it but we can't help feeling a little disappointed.

Michelle's favourite frock from the film is a "Fortuny blue dress" while Laura's "was the day dress when the King and Queen came for afternoon tea - red, silk knit, very 20s. Gorgeous."

But not as gorgeous, it seems, as Hugh Bonneville in stockings.

Allen is a big fan: "Hugh's got the most fantastic calves in his stockings! I don't know if he does lifts but they're a sight to behold!"

Hugh is happy to receive the compliment: "My calves will be a feature of fan memorabilia for years to come."

"At Highclere, they were having a dressing up day. One lady cried on me, she was so overwhelmed," says Lesley.

Jim's screen name even reverberates across the parks and pavements of the UK: "Several people have named dogs after Carson and there's even been one baby!"

12) That OTHER drama featuring the royal family

Did the film-makers pick up any tips from Netflix hit The Crown for Downton's Royal visit?

Producer Gareth Neame jokes: "They took their lessons from us!"

But director Michael Engler says: "We love The Crown, we learned from it, the level of production, the detail - the level has to be as high as it can possibly be." 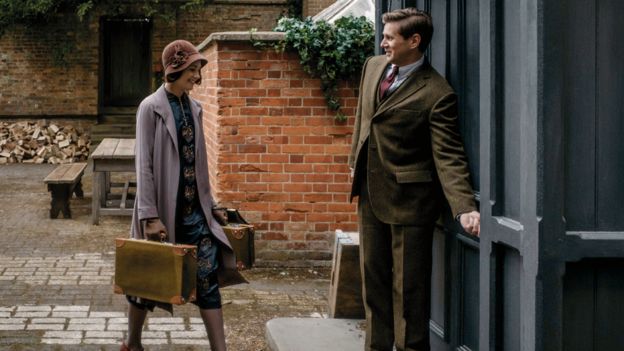 What would the stars wish for their characters?

Laura says she "would like to see Edith writing more and have a new career".

Michelle would like Mary "to continue to be happy but I feel like she needs to get out a bit more or travel".

But Allen has something more exciting in mind, inspired by a traumatic experience Thomas has in the film when he goes for a night out on the tiles.

"Thomas tells Branson about his ordeal, they realise there's a market there and they open the first Irish gay bar. Mary is the DJ."

We want a VIP pass.

14) Could there be a sequel to the film?

Julian hasn't ruled it out.

"I don't know if there will be more. If we made the characters aged 60, it wouldn't be very credible. I wouldn't take them 20 years forward.

"Is there another bite to come out of it? It depends entirely on how people respond to the film."

He had his doubts about making a movie version in the first place.

"I didn't believe in the film because there are lots of wonderful series that don't have a film such as Mad Men and The Good Wife. I thought it would prove impossible to get everyone together."

But Gareth Neame points out: "Fans felt we were leaving the stage too early after series six. It felt like a contract with the fans [to do the film]."

'Pushing the boundaries' of immersive theatre
Previous Item
NEXT

Kim K opens up about depression
Next Item