Mackie and Jackson also co-starred in the Avengers movies

Apple has cancelled the world premiere of one of its streaming service's first original movies while it investigates "concerns" about the film.

The Banker is based on the true story of two black businessmen who overcame racial prejudice by enlisting a white man to front their bank in 1960s Texas.

Apple did not give details about the nature of the concerns.

But Hollywood media reported they related to complaints from the children of one of the men, Bernard Garrett.

The red carpet premiere was due to take place on the closing night of the American Film Institute [AFI] Festival in Los Angeles on Thursday. The film is due to have a cinema release on 6 December before being available on Apple TV+ in January. 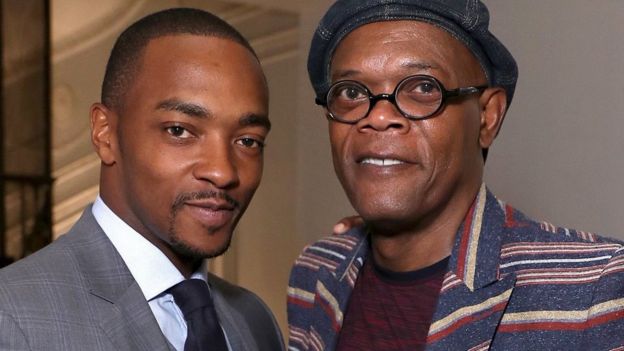 Mackie and Jackson also co-starred in the Avengers movies

In a statement, Apple said: "We purchased The Banker earlier this year as we were moved by the film's entertaining and educational story about social change and financial literacy.

"Last week some concerns surrounding the film were brought to our attention. We, along with the film-makers, need some time to look into these matters and determine the best next steps.

"In light of this, we are no longer premiering The Banker at AFI Fest."

The Banker stars Anthony Mackie as Garrett and his Avengers co-star Samuel L Jackson as Garrett's partner Joe Morris. In the film, they recruit Matt Steiner, played by Nicholas Hoult, to help them get around racial barriers.

The pair pose as a cleaner and chauffeur, but in reality use the banks they buy to give loans to other African Americans.

When announcing the premiere in October, AFI Festivals director Michael Lumpkin said: "The Banker joins a remarkable group of films being released this year that openly confront centuries of racism and injustice in our country, while celebrating the brave individuals whose activism has created real change."

Gomez is 'confusing' her record label
Previous Item
NEXT

Jussie Smollett is suing the city of Chicago
Next Item