No Time To Die: The verdict on Billie Eilish's James Bond theme

Billie Eilish's theme for the new James Bond film is a dramatic, unsettling ballad that hints the plot will centre around the secret agent's betrayal.

The lyrics to No Time To Die reference lies and deceit, as Eilish sings: "You were never on my side."

The song was released at 00:00 GMT, at the same time as the latest trailer for the film, starring Daniel Craig.

Eilish, who turned 18 in December, is the youngest singer ever to record a theme for the franchise.

Its release was highly anticipated at the end of a week that saw her performing to a worldwide TV audience at the Oscars.

No Time To Die opens with a haunting piano motif, with the star's voice weary as she sings, "I should have known I'd leave alone".

A familiar tremolo guitar ushers in the chorus, where the singer develops her theme: "I've fallen for a lie... Are you death or paradise?"

The words seem to confirm a fan theory that Daniel Craig's final outing as Bond will see him double-crossed by Madeleine Swann (Lea Seydoux), his love interest from the previous film, Spectre.

Eilish wrote and produced the title song with her elder brother Finneas O'Connell late last year. Speaking at the Grammys in January, she said working on the franchise had always been one of their goals.

"Subconsciously and consciously, we've been trying to write a Bond theme for our whole lives," she told E! News.

Shrewdly, the duo retain their dark, off-kilter style throughout the song, while incorporating several of the film series' musical touchstones - swelling strings, discordant brass, and, best of all, it finishes with the distinctive minor 9th chord that closes out Monty Norman's original Bond theme.

Lyrically, they touch upon the psychological toll of 007's licence to kill, with the observation: "The blood you bleed is just the blood you owe".

But the song is very much about a romantic betrayal. "Was I stupid to love you? / Was I reckless to help?" asks Eilish in the bridge.

The musician is known for her intimate, designed-for-headphone vocal style, but she rises to the challenge of the song's soaring climax, with her early vulnerability transforming into strength and resolve.

It's easily the most audacious and atmospheric take on the Bond theme in recent memory. 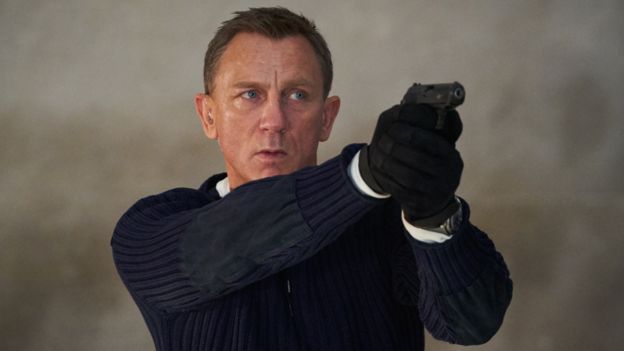 Eilish will give her first live performance of the song at next week's Brit Awards, accompanied by composer Hans Zimmer and former Smiths guitarist Johnny Marr.

The singer is up for best international female at the ceremony; just two weeks after sweeping all four of the main categories at the Grammys.

No Time To Die could also earn her another trophy: The last two Bond themes, Adele's Skyfall and Sam Smith's Writing's On The Wall, both won an Oscar.

No Time To Die, the film, is due to hit cinemas in April.

Alongside Craig and Seydoux, it stars Lashana Lynch, as a 00 agent who entered the service after Bond's retirement; and Rami Malek as the villain Safin.

It has been written by the regular Bond team of Neal Purvis and Robert Wade, with additional material from director Cary Joji Fukunaga and Fleabag star Phoebe Waller-Bridge.
What did other people make of it?

The Independent labelled the Grammy winner's Bond theme as "one of the best we've had in some time".

"The flourish of violins, electronic guitar and faint brass all pay tribute to classic Bond theme tropes, but Eilish's subtle synth motif makes this song her own," wrote Roisin O'Connor.

The Guardian described the track "a Bond theme befitting of the Craig era".

"The pop sensation sidelines her trademarks for a tasteful track that matches the haunted solitude of its leading man," said Alexis Petridis.

Eilish's "downbeat noir is spine-tingling", according to The Telegraph's Neil McCormick.

Finally, BBC entertainment correspondent Colin Paterson tweeted he thought the track was the "first serious Oscar contender for next year".

Fans of Sir Elton John, who won the best song Oscar last weekend, should look away now, though... because Paterson added the track was "better than any song nominated this year".

Inside Bieber's album playback
Next Item