In the past, it was very difficult for music artists in Malawi to find a place where they could record their music, as studios were few and far between.

Just a decade ago, artists would have to wait for their turn to get the chance to use the few production studios that were available. But the industry has evolved, thanks to technology.

Small production studios outfitted with Apple personal computers and recording software are making it easier for artists to create new work and release it online.

Technology has definitely had an impact on Afro soul singer Faith Mussa's career.

"Over the past few years I decided to develop a one-man band. The one-man band uses a gadget called a loop station, so I'm able to produce music, making big sounds with just this gadget," he told the BBC.

"Several instruments can be connected to it, and I'm able to record myself, re-record and repeat it on stage."

He added that the loop station gives him the ability to record huge sweeping vocals and specialised drum sounds, and take the recordings overseas, where he can sample them to create new music for live audiences.

While foreign music still dominates the radio stations in Malawi, more stations are starting to play music by Malawi artists, and DJs in night clubs are following suit.

But are they able to make money?

According to Mr Mussa, "things are moving in the right direction", and some music artists in Malawi are now able to make a living from their work.

However, he says that it can still be very difficult for both emerging and established artists.

The impact of piracy

Piracy is a big problem in Malawi. Sales of CDs have declined in recent years, and MP3 tracks are often sold on USB memory sticks by unauthorised vendors or shared on social media for free. 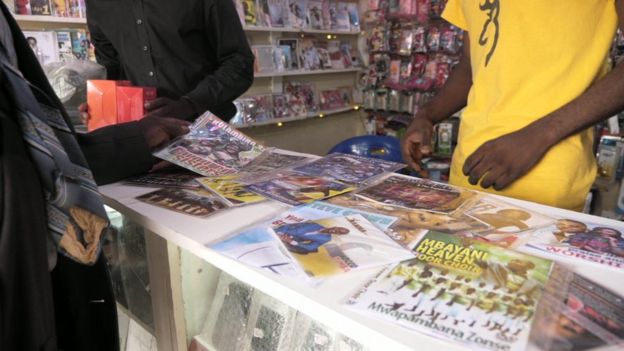 On the Youth Voices blog, which is part of The Commonwealth's Youth Programme, Lonjezo Idrissa, 22, wrote that many music artists in Malawi are still struggling to find the funds to product new music, even if their work is popular with audiences.

"Some have produced hit song after hit song but are still at the same place financially as they were before joining the music industry... because of burning studios which reproduce and illegally sell the musicians' songs before the musicians make money from their music or even recoup the cost of producing their music," Mr Idrissa wrote.

The Copyright Society of Malawi (Cosoma)says it is dealing with the piracy problem and finding ways to get musicians paid.

"The musicians are being used to provide content, so you have companies that have come up that are into content aggregation," said Rosario Kamanga, Cosoma's senior licensing officer.

"You have telcos that are providing various services that have music as a component, [such as] ringtones and ringback tunes, and all of that provides money."