Dua Lipa: Critics rate Future Nostalgia as the best album of 2020 so far

The singer's second album is the follow-up to her self-titled, Brit Award-winning debut

The future starts now for self-isolating Dua Lipa fans, after the star put out her new album a week early.

Early reviews have been glowing, with critics calling the record "viscerally brilliant" and "pop perfection".

It is now the top-rated album of 2020 on review aggregation site Metacritic, with an average score of 92.

The NME gave the same top score, calling the album "powerful pop perfection from a star unafraid to speak her mind".

"The artist's stunning second record tackles sex, inequality and empowerment. And all with a little disco shimmy," reported Rhian Daly. 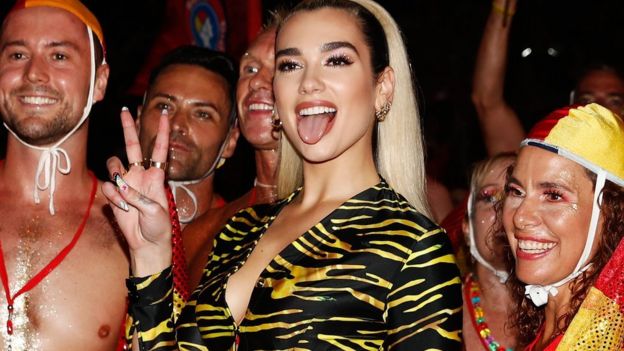 Dua Lipa has had two UK number one singles; New Rules and One Kiss, with DJ Calvin Harris.

The Guardian described the British-Kosovan singer as "a true pop visionary", awarding four stars and applauding Dua for not taking "the easy path" of making an album full of star-studded collaborations.

The star's second album is the follow-up to her Brit Award-winning, self-titled debut.

It was due for release next week, but Dua announced it was being brought forward in a tearful Instagram live, after it leaked in full last weekend.

But she admitted to having mixed feelings about releasing new music during the coronavirus pandemic.

"I've been a little bit conflicted about whether it's the right thing to do during this time because lots of people are suffering," she said.

"I'm not sure if I'm even doing the right thing," she continued, "but I think the thing we need the most at the moment is music, and we need joy and we need to be trying to see the light.

On the eve of release, she issued another statement, saying: "I have never felt more myself in making this album.

"And I'm grateful to some incredible people that held my hand through it - allowed me to believe, gave me confidence to dig deeper and create something fun, cohesive and reminiscent of my childhood influences."

One of those influences was evidently INXS's Michael Hutchence - as the 24-year-old British-Kosovan star sampled the Australian band's Need You Tonight on new single Break My Heart.

The accompanying new video sees her hit the dancefloor, reach for the skies, and go deep under the covers, as she wonders, "Am I falling in love with the one that could break my heart?"

As well as winning multiple Brit Awards in recent years, Dua also bagged best new artist at last year's Grammys; so her new album was eagerly anticipated in the States, too.

Pitchfork liked the sound of her musical memories from discos yet to come, comparing her to one of pop's biggest names.

"Future Nostalgia is a breathtakingly fun, cohesive and ambitious attempt to find a place for disco in 2020.," wrote Brittany Spanos.

"Incredibly, Lipa is successful: The upbeat album that she decided to release a week earlier than planned is the perfect balm for a stressful time."

Netflix: 4 things which drove its success